A celestial celebration of Earth’s place in the Cosmos, mapped onto Earth

It’s been repeated now a million times, but its grandeur bears another announcement: on August 21, 2017, a long-awaited total solar eclipse will cast the moon’s narrow shadow directly across the United States. The reverse perspective–the vantage that humans have always had, although they haven’t necessarily understood it–is that the sun will be gradually but briefly blocked by the invisible day-time visage of the new moon.

Although the eclipse will be partially visible from a number of countries, this one is a particularly patriotic eclipse for America as it’s the sole country in the path of Totality, and the swath within which more than half of the sun will be blocked covers very nearly the entirety of the continental U.S., save for a couple towns in northernmost Maine.

As my friend Sean enthusiastically explains, this makes it a Big Deal.

…and as Vox highlights, in this wonderful piece “Tales from the Shadow of the Moon,” it is indisputably worth trying to make it to the path of Totality, where the sun will become completely obscured by the Moon. NASA–and a great many other enthusiastic scientists, journalists, and cosmically awed–have done a stunning job ramping up the anticipation for this Great American Eclipse. Superlatives abound as likely an unprecedented number of people tune in and travel to see this fleeting phenomenon. And maybe that’s for the best. I’ll be among them, making a pilgrimage back to the States for–among other things–an All-American family roadtrip, in an RV, to watch the eclipse on the Snake River Plain, surrounded by volcanoes and earthquake faults, in the small town near the home of my cousins.

All of this interest, coupled with the geographic particularity of this eclipse, has spawned a delicious array of mapping projects which–quite beautifully when you step back and consider it–trace out the convolution of this special celestial phenomenon with very terrestrial ones: climate, landscape, continental geography, human geography, infrastructure, culture, cuisine.

First, we must map the basics of the eclipse. NASA has pages chock full of technical eclipse maps, showing timing, coverage, etc., but one of their most understandable and “illuminating” is an animation of the Moon’s pinpoint shadow piercing through space as Earth and Moon twirl around. Google Earth shows this animation with a more realistic blotch of shadow (“penumbra“)–compare the animation below with actual satellite observations of an eclipse crossing Earth on March 9, 2016.

Preview #eclipse2017 from your area and find the best time to look up with data from @nasaearth: https://t.co/cFSA1jXZvz pic.twitter.com/GplYYionbr

…that tweet links to a great interactive feature on where, when, and how to see the eclipse. The Washington Post also has a wonderful scrolling feature mapping out what lies in the path of the Moon’s shadow.

In mapping out the eclipse, cartographers of all stripes have matched this astonishing spectacle with its context in the world we live on, sometimes for fun, but also sometimes out of necessity. Thanks to soaring production of electricity using solar power instead of the unsustainable and environmentally devastating use of coil, oil, and gas, the Moon’s shadow will actually have a big–but brief–impact on the U.S.’s power grid.

Mapping out eclipse coverage is immensely important for the electricity industry to smoothly accommodate the rapid, enormous shift in power resources. Notable figures from that article include that the drop in solar power generation in California alone is equivalent to the total power demand of Los Angeles from 9am to noon.

But for those of us just heading out to witness one of the most spiritually moving events one can, there are more relatable personal-scale logistics to cope with. Clearly, interest in this eclipse correlates with its proximity, and thus accessiblity.

Beyond where it will be visible, the foremost question is, “will I have a clear sky to view it?” Well naturally, there’s a map for that. Joshua Stevens analyzed the past 16 years of Earth-observing-satellite images to produce a map of the historical likelihood of having clear skies on Aug 21. 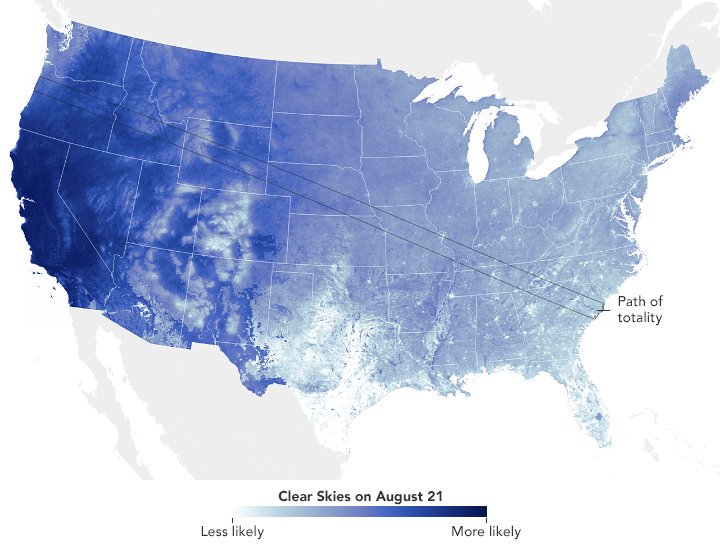 That map may help choose where to see it (odds are in my favor in Idaho’s Snake River Plain), but obviously other things factor into one’s choice of destination. The most significant factor may be logistical ease. Thankfully, a clever, wonderful, impressive mapping project is on display at GreatAmericanEclipse.org. Michael Zeiler conducted some fabulous analyses, mapping out the driving distance to the line of Totality from everywhere in the country, … and a driveshed analysis identifying, for each interstate that crosses the path of Totality, all the origins of folks for whom it’s the closest point to drive to. From these Zeiler could calculate some crowd estimates for each potential viewing site. Things look most stressful for the I-95 corridor, where the protruding neck of New England makes that catchment both one of the largest and the most densely populated. While we’ll likely be enjoying clear-skied western aridity in the Snake River Plain in Idaho, our I-15 catchment includes the entire population of southern California (my family is coming from L.A….), Phoenix, Las Vegas, etc. It might be a proper circus.

In fact, the Federal Highway Administration has set up a dedicated page to monitor and track eclipse traffic on Monday.

Can’t get enough eclipse maps convolving this special event with the richness of American culture? You’re in luck; this bountiful thread offers the eclipse map for any taste (give it a click and scroll down through the responses):

"There are no more eclipse maps to make"

It’s worth celebrating how special Earth is when it comes to eclipses. Out of cosmic coincidence, our sun and our moon appear roughly the same size in the sky. There’s no inherent reason for this fortuitous configuration, but it’s undeniably distinctive of Earth, and it’s been at least suggested that its resultant monthly tidal cycle (plus the rearranging tectonic plates) may have provided the special opportunity for life to evolve out of the oceans, culminating with us conscious beings looking back with awe.

This eclipse will be not just seen by hundreds of millions, but will be viewed, through dedicated effort to witness it, by an extraordinarily large group of people.

These witnesses are grouped together by their nation, and it’s difficult to imagine a more apt juncture for a population to get a dose of cosmic perspective, whether for respite, inspiration, motivation, salvation,

…or simply for the visceral reminder that we live together on a ball in space
and have taken our whole existence to understand
where we are
and how it works
and that we’re both lucky, and hence responsible–for our home and our shared humanity.