Vine Street rises abruptly across the Hollywood fault scarp behind one of the city’s most iconic buildings.

Amid an atmosphere of contention and high stakes, the California Geological Survey this week released a preliminary official map of the Hollywood Fault, one of the most threatening urban earthquake faults in the U.S.

The map ( available in PDF format here ) delineates the best estimate surface trace of the Hollywood fault, which forms the southern boundary of the Santa Monica Mountains in urban Los Angeles. It also defines a “special study zone” of ~quarter-mile width that most likely contains the fault itself and subsidiary strands. The mapping of this zone satisfies the Alquist-Priolo (AP) Act, a California law that prohibits construction directly atop known fault lines and requires pre-development investigation to precisely locate these faults within specified zones.

The proposed Millennium Towers, with the mountain-bounding fault snaking beneath the streets below them.
Image via http://millenniumhollywood.net/project-overview/

The map was likely drafted in response to the ongoing controversy over the Millennium Towers development project in downtown Hollywood, but remaining uncertainty in the location of the paved-over fault requires a bit more honing before a final official version is released. This week’s release begins a 90-day public comment period that culminates with a public hearing. Undoubtedly its preliminary publication serves the immediate needs of city officials and private developers sparring over the Millennium Towers construction site, which now formally occupies an AP Zone.

Implementation of a new AP zone, especially in so densely developed an area, will garner a lot of attention, a lot of contention, and a lot of concern. The Hollywood fault underlies some of L.A.’s most primo real estate, so there are a lot of high profile interested parties.

I’ve assembled a tourist-brochure-esque figure of iconic buildings and areas that fall within the new AP zone. 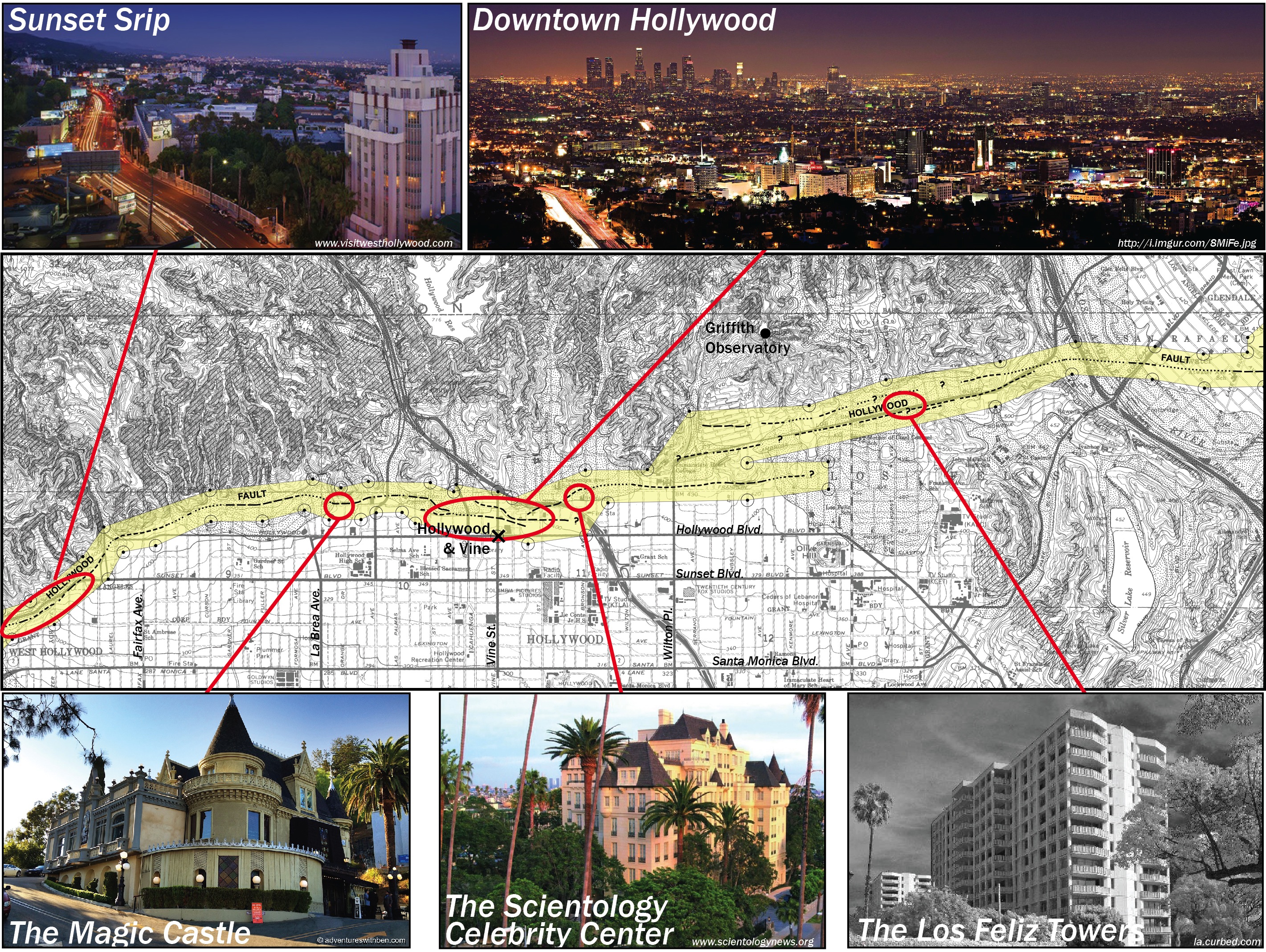 The Hollywood fault runs beneath scores of renowned landmarks.

The good news is that 1-2 story wood frame homes are pretty much exempt. Lots of larger buildings are now grandfathered in, but substantial renovation (>50% building value) and new construction now require a more rigorous permitting process that includes geotechnical investigation for active fault strands underlying the property. New construction designed for human occupancy must be set back 50 feet from identified faults. Currently, no properties sitting atop the Hollywood fault are deliberately set back from its trace, leaving lots of buildings at risk of surface rupture.

You can find out it your home/business/building lies within this new zone via an interactive map from the L.A. Times:
http://graphics.latimes.com/responsivemap-la-me-earthquake-fault/
(Note that this map only covers the Hollywood Quadrangle that was released this week. The same fault extends to the east and west into South Pasadena and Beverly Hills, respectively. Presumably these other maps will be released shortly following this one.)

If you do live or own property within this zone, it would behoove you to seek more information from official sources like the CGS.
The full text of the Alquist-Priolo Earthquake Fault Zoning Act can be found here:
http://conservation.ca.gov/cgs/codes/prc/Pages/chap-7-5.aspx

The map itself can be downloaded as a PDF here:
ftp://ftp.consrv.ca.gov/pub/dmg/pubs/sp/Sp42.pdf

The dashed lines and question marks along the length of the fault indicate the uncertainty with which the trace is located. This imprecision is an unfortunate consequence of the city being paved and erected before geomorphologists had a fair chance to (or any idea they needed to) map out the scarps. The importance of this map assures lots of more detailed subterranean surveys to hone the location of the fault.

Legal issues, building codes, zoning, and permitting aside, this map merely reiterates the geologically well known and inevitable: there is a major earthquake-producing fault running through Los Feliz, Hollywood, West Hollywood, Beverly Hills, and Santa Monica. It has in the past and will in the future rupture the ground surface during a large earthquake. We don’t know when, but we *pretty much* know where. More aware suburban communities have taken action to avoid structural damage along fault lines; for this old part of L.A. the mitigation of this risk will take a lot of time, a lot of expense, and a lot of frustration, but the AP Zone is a critical first step.