At first glance, the Altoona Coal Mine of Pulaski County, Virginia, seems to be in just the right place. Coal beds in its Little Walker Mountain setting occur just up-section and downhill of a prominent sandstone bed, which forms an obvious “rib” on the slopes of the mountain. The mine was opened right at the base of this rib. This must have appeared to be a great location, as it took advantage of a stream valley to ease construction of a tram railway to the mine. Prospect pits and mine adits leading up to the Altoona’s location are visible in the GIF below. The rib is marked with a pink overlay, with mine workings visible as tiny dots to its right; the image that follows the GIF is a detail of mine workings adjacent to the rib. Despite its apparently good location, all was not well at the Altoona Mine. Coal seams in the mine were too distorted and mixed with surrounding rock to be easily extracted, leading to its ultimate failure. Early 20th century geologist Marius Campbell addresses this issue at length in the 1925 report The Valley Coal Fields of Virginia, twice calling Altoona’s location “the worst” in the general area and the obvious reason for the mine’s closure. Campbell connected the geologic issues in the mine with its position near a complex ridge pattern that implied large-scale folding in the underlying strata. His focus was on the apparent convergence of Little Walker Mountain and Tract Mountain southwest of the mine’s location. This pattern is visible in Google Earth satellite imagery, and is also quite noticeable from ground level near the mine. Little Walker Mountain, which is typically an arrow-straight ridge, is noticeably buckled in the vicinity of the mine, and Campbell may have seen this feature as evidence of rock deformation associated with the Little Walker-Tract Mountain structural setting. 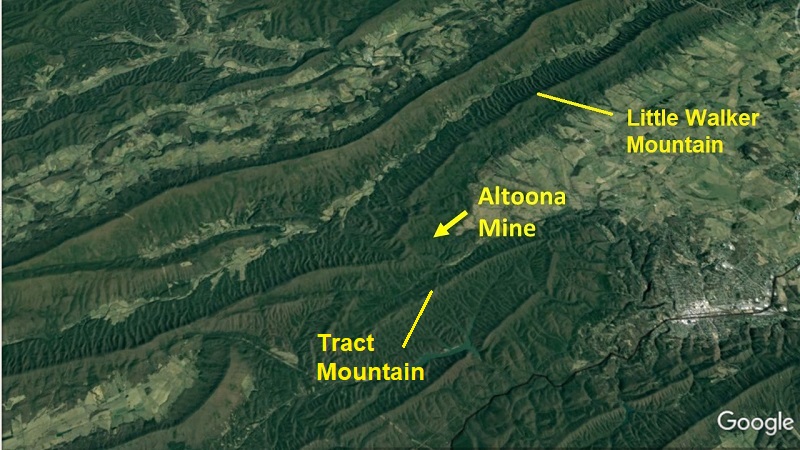 Campbell was definitely onto something, and he was certainly correct that weak rocks, like coal, focus deformation when surrounded by stronger material like sandstone or limestone. He attributed rock distortion at the mine to “cross-folding,” which appears to be his term for the structures that create the locally buckled appearance of Little Walker Mountain. As it turns out, Campbell wasn’t exactly correct, but accurate interpretation of the area is essentially impossible from field data alone due to limited outcrop. Additionally, no high-altitude imagery was available at the time, preventing Campbell from having a Google Earth-style, satellite-level view of the mine’s setting. Today, lidar-derived imagery quickly reveals the true structural issue at the mine, along with the large-scale context of the distorted coal beds.

A close look at a 1-meter lidar hillshade image reveals that the Altoona Mine is indeed positioned exactly in a fold hinge. This fold structure is more significant and affects a greater thickness of rocks than Campbell’s “cross fold” concept suggested (more on this below), but it is still subtly expressed, even in the high-resolution lidar imagery. The GIF below overlays color bands onto distinct rock units to highlight the fold, which is very tight and probably faulted. I think the fold is most visible just below and left of center, where the purple and blue bands meet in a V-shaped point. From here, the faint layer patterns can be followed towards the mine. Layers young towards the right; purple covers Devonian-aged rocks, while the mine is developed into Lower Mississippian-aged rocks.

The significant folding near and left of image center appears to die out in the vicinity of the mine, where the sandstone rib that highlights the coal location does not immediately appear offset. An even closer look suggests that the rib is deflected to the observer’s left, indicating that the rib layer and coal-bearing interval are either folded into a very tight syncline or repeated by a minor thrust fault. The mine is located nearly atop this highly distorted area, which nicely explains the messy condition of its coal beds.

Based on these lidar-derived images and my own experience in the area, the structure immediately adjacent to the mine would not be decipherable through field work. Sedimentary rock layers visible in the lidar imagery do not actually produce much surface outcrop; they only create faint bulges on the land surface that require a 1-meter resolution (or better) digital elevation model to see. The fine structural details at the mine are still not completely clear in the imagery, but I would offer the two conceptual models below as explanations of the folding and faulting that produces the observed surface pattern. They are very similar (differing only in terms of a small fault vs. a fold in the mine area), and both would produce considerable distortion of the coal-bearing horizons. The models use a wedge-type geometry instead of a single fault cutting all the way through the affected section. This is a way of reducing apparent offset of the pink sandstone marker bed, which is not obviously deflected to a ground observer or coarse-resolution map user. Both models focus shortening into the coal zone and would result in thickened, duplexed coal seams. Thickening of coal beds is one of the details reported by Campbell, with the main coal bed in the mine reaching 125 feet (~38 meters) thick in some areas despite an average thickness of 7 feet (just over 2 meters). In addition to locally thickening the coal, the tightness of small scale folding in the mine, along with possible faulting, would have broken surrounding sandstone layers and forced pods of sandstone into the more ductile coal. Coal beds in the mine would thus have been observed to be locally atypically thick or atypically thin, and full of fragments of surrounding non-coal rock. As a result, the mine would have been nearly impossible to develop efficiently.

As mentioned earlier, folding around the Altoona mine is not the result of the mine being between Little Walker and Tract Mountains. In actuality, the fold on which the mine is situated has developed along one of at least two thrust fault structures that climb out of the Devonian-aged rocks into the coal-bearing Mississippian aged rocks at the mine. These faults produce the bends or buckles in the Little Walker Mountain ridge and may have accommodated displacement as bedding plane faults in the Mississippian strata, either in the coals themselves or in the overlying Macrady shale. I highly doubt these larger faults would be easily field-mapped either, due to the difficulty of finding meaningful bedrock outcrop where the faults climb upward into the Mississippian layers. Where the faults are operating as detachments or flats within a single stratigraphic interval, they are not readily identifiable even when outcrop is present. The GIF below traces these faults relative to the mine’s location.

While coal extraction was not particularly successful at the Altoona Mine (and never will be!), the mine’s coal issues highlight a structural scenario that is valuable to structural interpretations of the surrounding areas. Cove and Tract Mountains, the respective left and right elliptical ridges south of the mine, are part of a large structural mass that is difficult to relate to neighboring thrust sheets. Cove and Tract Mountain (as well as Draper Mountain to the south) reached their structural position on what should have been a high-displacement thrust fault, but evidence suggesting this high displacement is hard to find. Activity on the detachment fault that terminates around the Altoona Mine could help explain some of the “missing” fault displacement, particularly where the additional fault to its north is considered. These otherwise subtle features would largely escape consideration were they not connected to a conspicuously bad coal mine, making the Altoona a geological success long after its closure!