“Squirrel tail” synclines in the Appalachian Valley and Ridge

In the course of recent geologic mapping in the Appalachian Valley and Ridge, I came across a great 2010 paper by Jerry Bartholomew and Sharon Lewis describing extremely tight (and ultimately fault-transported) synclines in the footwall of a major Appalachian thrust system. These synclines are particularly distinctive due to the length of their overturned limbs. I found myself in need of an analogy to describe the shape of these structures, and I settled on “squirrel tails” because Bartholomew and Lewis’ cross sections of the features reminded me of how a squirrel drapes its tail over its body and head. I am not sure if this is an effective comparison or not, but the overall approach seems to have served humans well when it comes to mentally organizing patterns of stars in the night sky. I provide supporting images below! (nice squirrel photo sourced here). The squirrel tail type locality, which inspired the cross section above, is located between Radford and Christiansburg, Virginia, in the footwall of the Pulaski-Max Meadows Thrust Fault system. This structural style came across my radar after I mapped a similar type of structure ~25 miles (40 km) to the southwest, near the town of Max Meadows itself. The geologic map overlay below shows the surface expression of the structure I mapped. Using the squirrel analogy, the overturned area is the tail, with the upright body still below it in the subsurface. The upright body portion is today exposed on Draper Mountain, which is labeled “Upright” below. This area stands out because the blue Siluro-Devonian sandstone unit is effectively folded back on top of itself, creating a nearly isoclinal fold. Mapping suggests that only a thin seam of Devonian shale (dusky blue separating the light blue zones) separates the sandstones horizons of the upright and overturned limbs. The exposed portion of overturned limb cored by the Martinsburg Formation (Omb) is 2,000 ft (630 m) across at its widest, but would have been wider prior to erosion to the present-day outcrop level. Surface outcrop patterns and lidar-derived hillshade maps suggest the pre-erosion structure of the blue Siluro-Devonian sandstone layer would have looked something like the sketch below. The nature of the hinge area (the “?”–is it faulted or not?) is unknown. I “squirrel-ized” the sketch in the second image for comparison to Bartholomew and Lewis’ examples. Note that the sketch focuses on only one thin stratigraphic horizon; the pre-erosion structure, as well as the upright limb in the sub-surface, involve a bit more section. The Siluro-Devonain layer should also continue in the subsurface to the left/northwest; it is cut off here to illustrate only the folded area. 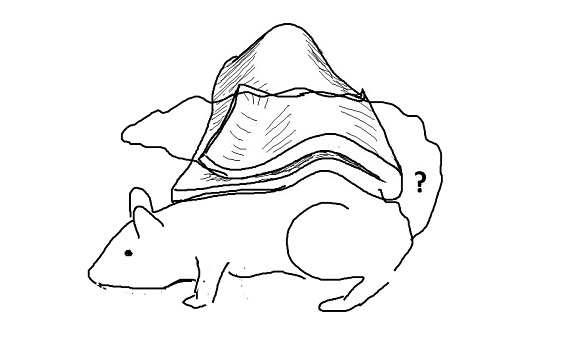 The mechanism through which such a lengthy overturned limb and tight overturned syncline develop is interesting to consider. I tried to create comparable structures in a sand model utilizing several overlapping weak detachment layers (white layers in the model images below). Surprisingly, I was able to produce tight footwall synclines that likely involved a single layer during their formation and initial fault transport, much like the squirrel tail geometry. The synclines displayed long overturned limbs, separated by a thin seam of weak layer material. A good example is shown below, along with more squirrel-ization. Yes, this model is hopelessly green. Current supply chain struggles appear to affect colored sand, so only the shape of the structure is the focal point here! I find this model complicated to look at compared to a nice set of colorful thrust imbricates, but I think it does contain a legitimate squirrel tail-type structure with upright and overturned limbs of comparable length. The limbs are separated by a very small amount of weak microbead material. The structure occurs in the footwall of a major thrust system in the model, which is faintly arched by the underlying squirrel tail block. A primary goal of these models was to figure out what the overturning process actually looks like, as the long overturned limb cannot simply swing on a hinge like a door. Based on observations from a couple of other models, I think the overturned limb might develop through tightening and stretching of an early fold at the trailing edge of the future squirrel tail block. The sketches below attempt to illustrate this process. The overturned limb at Draper Mountain is massively damaged (veined and fractured) and only stratigraphically recognizable in the field, as bedding has been heavily disrupted by the deformation. I think the mechanism below would certainly produce extensive damage in the overturned limb, but allow it to remain in its appropriate stratigraphic position. The model below may show the above mechanism in progress. Just below center, a developing squirrel tail is visible, lodged against the the yellow layer ramp (thrust transport was right to left). The overturned tail is not extensively developed yet, and it may show evidence of a tightening and smearing fold set as illustrated above. I would love to watch one of these features form, but I can confidently say that I am very unlikely to produce one of these features in a model with glass sidewalls. These models also require a large amount of shortening to fully develop, and they rapidly become prohibitively large and heavy due to the volume of sand and microbeads necessary. I haven’t completely abandoned this setup, however, and I plan to try a few more to see what other types of major thrust footwall structures can be developed.