Big change on a big landscape

The Alsek, a world-class rafting river that flows into the Gulf of Alaska from its headwaters in Canada, may soon abandon the lower part of its drainage for a steeper one 15 miles away.

The Alsek River starts in the Yukon Territory, flows through British Columbia and then on to Dry Bay in Alaska. It is a rare northern river that cuts from the interior of the continent through rugged mountains to the coast. 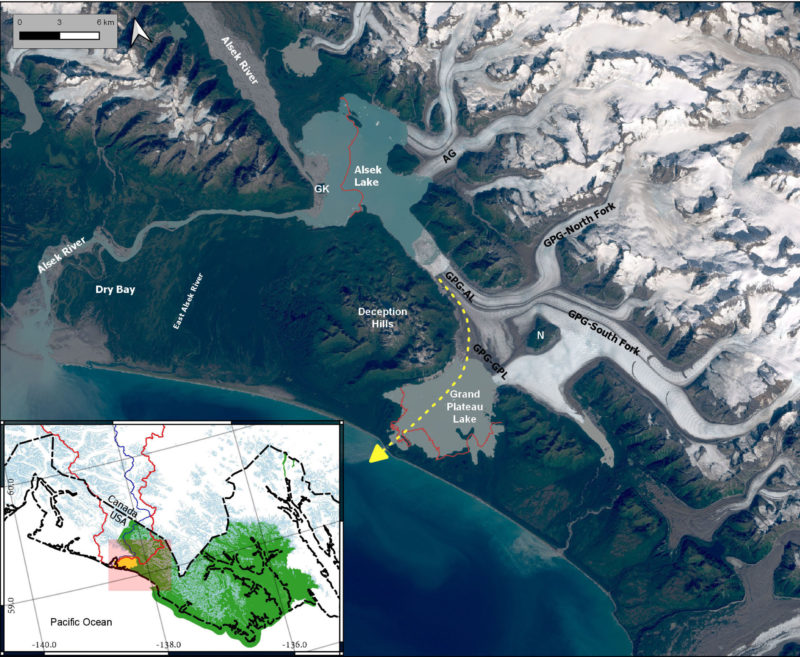 The re-route of the Alsek River’s ocean connection will be due to the extreme melt of Grand Plateau Glacier, which acts like a cork that prevents the Alsek from following a faster path to the sea.

The river re-route, which could happen within a few decades, would affect more than the 800 or so rafters who paddle down from Canada each year, said Michael Loso, a geologist at Wrangell-St. Elias National Park and Preserve. Loso is the author of a recent paper about the Alsek’s future.

Dry Bay, Alaska, into which the Alsek now flows, is the base for a commercial salmon fishery, with an airstrip and fish-processing plant. Fishermen also have cabins there, and there are a few fishing and hunting lodges.

“That’s a whole world there devoted to the Alsek River,” Loso said.

That part of the Alsek may dry up if the retreat of Grand Plateau Glacier pirates the flow of the Alsek southward over a steep forested lip to the sea.

“It’ll be difficult for these activities to follow the river,” Loso said.

Glaciers have always roughed up the Alsek River. The Kaskawulsh Glacier closed off the Alsek’s historic connection to Kluane Lake in 2016. Tweedsmuir Glacier has tongued into the Alsek — most recently in 2008 — discouraging red salmon from venturing farther upstream. The Lowell Glacier has several times dammed the Alsek, once resulting in an outburst flood that destroyed a Dry Bay Native village in about 1850. Alsek Lake, with the shrinking Grand Plateau Glacier in the background left. Beyond the glacier — along the path the Alsek River may take in the near future — is Grand Plateau Lake and the Gulf of Alaska. Photo by Chris Larsen.

“It’s a river that’s been pushed around by glaciers for a while,” said Chris Larsen, a glaciologist at UAF’s Geophysical Institute and a co-author on the paper.

The scientists have had their eyes on the area since the late glaciologist Austin Post predicted that if Grand Plateau Glacier withered enough, the Alsek would rush through the new opening.

Since the early 1900s, when the glacier almost met the sea, the ice has withdrawn dramatically, leaving behind two large basins, Alsek Lake and Grand Plateau Lake.

Larsen and others recently flew over the area, using radar to determine that glacier ice between the lakes lurches along a gravel bed that is well beneath sea level. That means that when the ice further melts, the river will probably follow the fastest path to the sea — the boulder-armored outlet of Grand Plateau Lake, which already features a few waterfalls to the ocean.

“Given the choice, the water will favor the steeper gradient,” Larsen said. The Alsek River is the straight, tan waterway with a major branch that turns left into Alsek Lake. As the Grand Plateau Glacier — near top left of the photo — recedes, scientists think the Alsek River will flow that way to the sea. Currently, the Alsek River hangs a sharp right to reach Dry Bay and the Gulf of Alaska. Photo by Chris Larsen.

The change that is about to happen to the Alsek River is symptomatic of what a warmer climate — added to a natural rebound from a cold period called the Little Ice Age in the 1800s — is doing to Alaska glaciers.

“It’s completely typical of what’s happening all over southern Alaska,” Loso said. “The whole landscape is changing before our eyes because of glacial retreat.”

Larsen, who has worked in the area for a long time, agreed. Just north of the Alsek River country, he has watched the ice of Yakutat Glacier melt into Harlequin Lake to the point where he doesn’t recognize the area.

“It’s like watching your kids grow — it’s hard to remember what they were like years ago. Only glaciers are going the other way, getting smaller.”

University of Alaska Fairbanks’ Geophysical Institute has provided this column free in cooperation with the UAF research community. More of Ned’s columns can be found here. Follow Ned Rozell on Twitter at @NedRozell and on Instagram at @neddyrozell.