The Ray Sponaugle well: A 13,000-ft lesson in Appalachian Valley and Ridge structure

The 1964 Ray Sponaugle #1 well of Pendleton County, West Virginia, did not produce any hydrocarbons, but it did provide essential information about the structural details of a major Appalachian Valley and Ridge anticline and sedimentary fold-thrust belts in general. The well was intended to target lowermost Ordovician- and upper Cambrian-aged carbonate layers beneath the Wills Mountain Anticline, a major structure at the leading edge of the zone of significant folding and faulting in the Valley and Ridge. The well was expected to terminate in Cambrian quartzites at slightly less than 11,000 ft (3,353 m) below the surface. To the surprise of the drillers and geologists involved with the project, the well bore never got anywhere close to the Cambrian quartzite. At 10,000 ft (3,010 m) below the surface, the well passed through a thrust fault and entered a tight, nearly recumbent syncline cored by the same Ordovician shale unit into which drilling began. Ultimately, after 13,000 ft (3,962 m) of drilling, the well was terminated in a horizon of rock equivalent to layers the well first passed through only 1,300 ft (396 m) below the land surface. The block diagram below shows this basic structure; the heavy black vertical line is the approximate well bore. The basal Cambrian quartzite layer (green) was probably 8,000 ft (2,438 m) or more below where drilling stopped. Pre-drilling understanding of Valley and Ridge structural style was obviously a bit off target… I drafted this block diagram from Google Earth surface imagery, a partial cross section from William A. Perry, Jr.’s 1964 AAPG Bulletin article describing the well, and Kulander and Dean (1986). The purple layer is the Middle Ordovician limestone interval through which the well bore passed near the surface and ultimately terminated in at 13,000 ft total depth. Perry’s description of the well, accessible here, is a fascinating read, and one can genuinely sense his surprise at the outcome, largely due to drilling so far to reach the same rock layers the well passed through much closer to the surface. Perry’s small cross section from the paper is shown below. 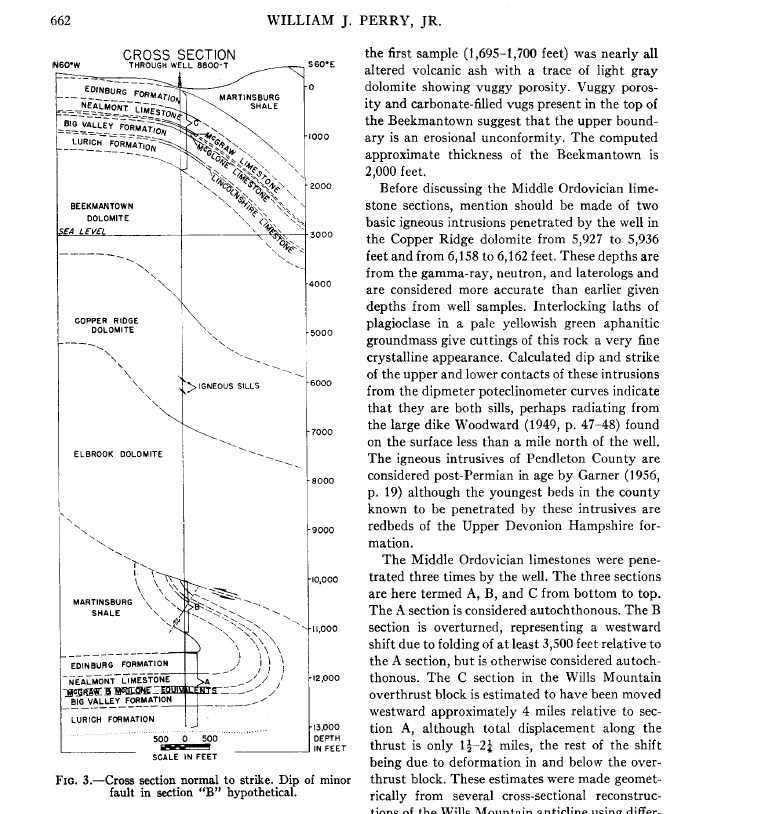 While the geometry shown in this cross section and in the block diagram would be considered a very reasonable Valley and Ridge (or any “thin-skinned” sedimentary fold-thrust belt) structural style today, conceptual models of Appalachian Valley and Ridge geometry were somewhat different in 1964. Drilling was expected to encounter the Cambrian quartzite (green in the block diagrams) at just under 11,000 ft (3,353 m) deep because faulting beneath anticlines was believed to involve crystalline basement rock (gray in the diagrams) and cut across sedimentary layers at constant angles, regardless of the mechanical properties of the layers. I tried to re-work the block diagram to illustrate this prediction, basing the geometry on some papers from the time. Compared to the actual structure revealed by drilling, the source of Perry and others’ surprise is evident: The Sponaugle well showed that faulting could localize within (and propagate parallel to) weak shale layers, allowing portions of the sedimentary section to detach, fold and fault above and independent of the basement rock. Faulting did not cut through the entire section at a fairly constant angle all the way down to crystalline basement (see the Cooper section at the end of the post). The structural style revealed by the Sponaugle well also provided a way to account for rock volume inside of anticlines by stacking and repeating large, shale-bounded portions of the stratigraphy without using basement rock and the full sedimentary section moving together. Perry rightfully deemed it necessary to reconsider Valley and Ridge structure at all levels. This was one of many steps towards the adoption of the “thin-skinned” model for the Valley and Ridge, in which major thrust faults sole into a Cambrian shale decollement (detachment) and step up into younger shales, independent from deeper Cambrian units and basement rock. Analogous thin-skin style geometries can be replicated in physical models containing weak layers to serve as decollements. In the model above, the white layer at the base of the section is the master decollement, representing the detachment between the layer pack and the fixed base on which the model was produced. The mid-section white layer will also develop very low angle, nearly flat fault segments that connect steeper faults cutting the blue and pink layers. Working together, the two weak white layers allow the blue layer to be stacked on top of itself. A well drilled in the center of the frontal anticline (maroon line) from an imaginary land surface (black line) would pass through structure comparable to Sponaugle. The frontal anticline containing the doubled blue layer is quite broad, which might suggest it involves a great thickness of layers. Instead, doubling of the blue layer accounts for the large volume of material inside the broad anticline. The full model, and another section from the same experiment, are shown below. With two weak layers and localized erosion above a growing anticline, the stacking can be taken to extremes as seen in the model below. The Sponaugle well was just one of many drilling enterprises that ended up informing interpretations of the Appalachian fold-thrust belt and many other thin-skinned sedimentary fold and thrust belts around the world. Today, structural interpretations in these settings place great emphasis on relative rock strength and anticipate zones of flat decollement faulting in shale or evaporite layers. These flats can later be deformed by subsequent faulting, creating great structural complexity. The Bolivian sub-Andes section below from Rojas Vera et al. (2019) is a good example (it is reflected to match the transport direction of images above). The anticline at the center of the image is architecturally similar to the Wills Mountain structure revealed by Sponaugle.

While Perry’s 1964 cross section would be well-received today, he was going out on a limb at the time. When the Sponaugle well was drilled, the basement-involved model for Appalachian structure was deeply entrenched. A particular champion of the model was Byron Cooper of Virginia Tech, who outlined his thoughts on Valley and Ridge structure in a 1968 paper available here. A cross section from Cooper’s paper is shown below, with several faults continuing down through sedimentary layers into basement as initially expected for the Sponaugle drilling site. This now-disproven perspective on Appalachian fold-thrust structure centered around subsiding synclines and forces internal to the folded and faulted area, bearing some similarity to models of “wrinkle ridge” formation in lunar/planetary craters. Notably, Cooper wrote the paper containing the section above in 1968, four years after the results of the Sponaugle well were published. He chose to omit Sponaugle and other wells in Pennsylvania from the paper as they were not consistent with his favored model. Cooper’s work was based largely on outcrop observations, however, and additional drilling- and seismic-based studies from the Valley and Ridge continued to reveal details its thin-skinned architecture during the 1970s and 1980s. By 1985, thin-skinned, decollement-based structural models had been developed throughout the Valley and Ridge that are still used today and remain conceptually, stylistically, and geometrically valid.

The Ray Sponaugle well: A 13,000-ft lesson in Appalachian Valley and Ridge structure