A Ship Full of Storytellers

They came to learn about R/V Falkor and life at sea. The first 24 hours aboard certainly offered them a crash course. Not long after leaving port in Guam it was time for lesson one: mal de mer (sea sickness). The malady was especially harsh on three of the five adventurous storytellers, but as the sun rose the next day and the waves mellowed down, they slowly began emerging from their cabins, ready to reconnect with the excitement of their missions.

State of the art technology on R/V Falkor empowers experts to produce new science, but that is just the start. Getting that knowledge out to the general public is fundamental to create a tipping point towards a society that is more aware of its link to the oceans. That is where Lucy, Jena, Andrew and both Brock Junior and Senior come in. Lucy Bellwood, Andrew Kang, Brock Callen Jr. and Sr. and Jena Kline are on board Falkor to learn about multibeam mapping and assist resident Marine Technicians when mapping the remote Johnston Atoll.

Outreach was the reason Brock Callen Jr. decided he wanted to sail on Falkor. As a professional sailboat racer and ambassador of 11th Hour Racing – an organization that strives to promote change in the sailing community for the health of the marine environment – he attended a presentation about Falkor. He became interested in learning how the ship’s technology and the crew’s abilities come together to solve challenges, getting the most out of the information collected. Brock plans on applying what he learns on the ship to sports he practices, then share the lessons with students in coastal communities abroad. “Always be a student of the game. The ocean is always changing: waves, currents and wind force you to take information and move forward by adjusting your mind and senses constantly,”  he says.

It was a tour of the ship which made Andrew Kang – a Biology student from the University of Guam – apply to Schmidt Ocean Institute’s Student Opportunities Program. By learning how Falkor’s multibeam echosounder works, including information processing and assisting the scientists and technicians with the process, he hopes to get more hands-on experience that he can apply to future research interests. Seasickness has not broken Andrew’s spirit; he cannot wait to begin: “I believe the best science is interdisciplinary, I want to use what I learn here and mesh it together with my areas of interest, such as deep sea coral reefs.” 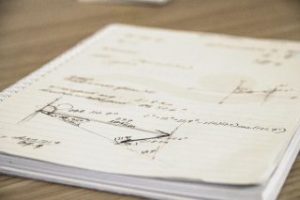 Jena Kline, a teacher from ‘Iolani School in Hawaii will take advantage of what she learns onboard to apply it to the classes she teaches on trigonometry.

Different disciplines definitely come together in this transit to Hawaii. While the motion of the ship heaving, pitching and rolling might not have been enjoyable for Jena Kline, this teacher from ‘Iolani School was already detecting learning opportunities for her students. Jena teaches trigonometry, which deals with vectors and cyclic motion. Jena wants to show her students the real life application of the variables she is observing. “The ship moves as a result of a combination of wind, currents and other factors, and we can model the function! We can show how trigonometry enables us to predict motion.” Lucy Bellwood, a cartoon artist from California, is already using everything around her as a source of inspiration to design a comic that will make science and life at sea more accessible for wider audiences.

The common goal is making knowledge accessible and useful for everyone. One very creative attempt to do so is in the hands of Lucy Bellwood, a professional adventure cartoonist from California. “I want to take unfamiliar experiences and locations and make them accessible to my readers. The key is making work that doesn’t talk down to younger readers, but is also interesting and engaging for adults.” Lucy is excited to have an open invitation in asking all sorts of questions to both the crew and the scientists. Her ultimate objective is to create an approachable, visual introduction to day-to-day life on Falkor,  as well as the challenges of advancing science. After a rough first night, Falkor sails at 12 knots towards Johnston Atoll, where it will map the seafloor and render high definition data about its geological composition and bathymetry.

Brock Callen Sr. was very impressed when he learned that all of the knowledge and data that is produced from Falkor’s research is launched in the public domain. He could identify with this effort to bring the ocean closer to people. Brock’s primary objective on this journey is to experience what both scientists and crew go through in advancing our knowledge about the oceans. Once he is back on Martha’s Vineyard, he will share the lessons learned in order to improve seamanship education, marketable maritime skills and environmental awareness practices within the sailing community.

Every day Falkor is at sea offers a new opportunity. Sailing at twelve knots towards the remote Johnston Atoll, the five resident storytellers are taking this transit time to learn all the skills necessary to be a part in the mapping of the seafloor. They are collecting experiences to take back home with the hope of bring the ocean closer to all of us.