Hydrothermal Hunt: From ‘Wow!’ to ‘Why?’

When a new dive starts, a huddle of scientists and engineers watch the ROV be gently lowered into the water. Once in, cameras reveal a bright blue ocean, rapidly moving from sky to navy blue as the ROV dives down. We are diving deep here, far past the last trickles of light from the sun. There is total environmental darkness within 300m, and we still have over 3000m left to go.

It takes two and a half hours to get to the seafloor, but the view you get is worth the wait. It’s a real privilege to be the first people to lay our eyes on some of these never-before-seen sites. Guided by the exploration phase of our previous cruise (and the instincts of the science team) we hit the vents quickly. The ROV flies towards groups of vent chimneys that look like ghostly abandoned cathedrals, giant 100ft structures pouring vast chemical solutions into the ocean. 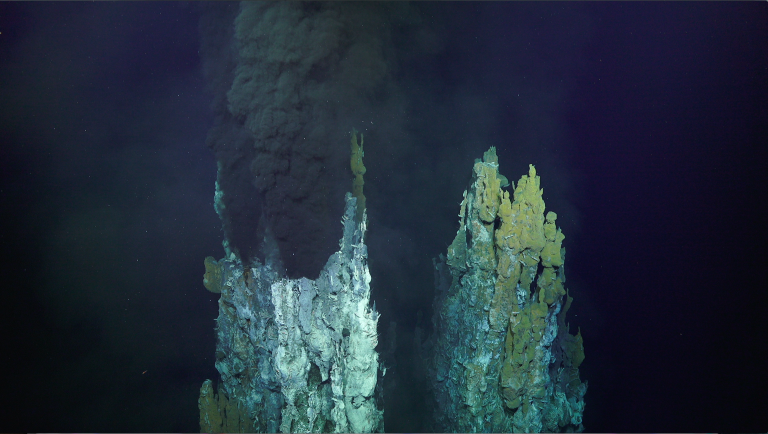 Ancient sea maps marked the warning ‘Here Be Dragons’ over unchartered areas. The view of billowing smoke at this site suggests they were not so far off. The first chimney looks like a scene from Lord of the Rings and we decide to call the site ‘Two Towers.’ Shimmering water and heat gives everything a dreamy glow. These sites look impossible; an aquatic environment supporting an architecture that defies gravity and the land-logic of home.

Watching shrimp happily swimming through black ‘smoke’ pouring out of a hydrothermal chimney takes a bit of getting used to. These animals are fascinating to watch, and the biologists are glued to the screens. Researchers are looking for clues into the behaviours of these rarely-glimpsed creatures. How are they making a living down here? How are they different from similar animals on other sites? How are they adapted to the unique geology, biology and chemistry of the area?

The volume level in the control room picks up a notch when we spot a crab feeding-frenzy. Eventually several crabs emerge with the claws and legs of other crabs hanging from their mouths. I guess we should not be surprised that life would be tough in a high pressure, hot, acidic environment, but it still takes me aback. Later we catch a close up of one large crab nibbling on the leg of a smaller neighbor. I start to get anxious, but as we go closer we can see this male crab appears to be delicately grooming bacteria from what appears to be a pregnant female. I certainly would be pretty cautious about letting one of these crabs near my leg, but we watch for several minutes and the grooming behaviour continues without any fuss. Life here adapts to gain energy in lots of ways, and it pays not to be a picky eater at the bottom of the ocean.

These incredible scenes are compelling and no-one on board has seen this behaviour before. We are not able to sit and watch these crabs in action for too long though. It is time for the chemists to take over the camera, guiding the ROV pilots to the best spot for collecting fluid samples. The ROV pilots use SuBastian’s Titanium arms to gently lower the fluid sampler into its target: the chimney opening of a black smoker. These chimneys are the conduit connecting the seafloor to an even more impenetrable location – the unseen magmatic heat source under the Earth’s crust. Watching animal behaviour gives us part of the picture, but we can not get close to a full understanding until we have more information about the chemistry of the fluids coming out of the vents. What is providing the energy in this system?

The surrounding seawater will dilute these vent fluids quickly and significantly, so it is vital to capture the hottest fluids as close to the source as we can. The pilots pull the trigger, and once the chemists have their precious sample flooded through the canisters it is time for the geologists to have their turn. ROV pilots guide the fluid sampler to the perfect spot in the chimney.

Heidi Berkenbosch has been studying chimneys for 8 years and is blown away by the views at this vent site; she has never seen anything like it. Lots of skinny little chimneys are very unusual and suggest there is some strange mineralogy here. Heidi reflects that as these dives go on, we’re moving from “Wow!” to “Why?” We are taking samples that really ask questions of the fundamental processes behind these systems. Why do these chimneys go upwards, not outwards? What impact is this having on the fluid distribution? To my eye we are seeing epic fields of life, but biologist Verena Tunnicliffe has been studying these types of sites for years and has been surprised to see limited diversity in species and numbers of animals in the back-arc. Thin ‘chimlets’ channeling the vent fluids in this field in an unusual way.

It is an intriguing part of the puzzle. For example, we are seeing only a few mussels so we know they can get there, but they are not thriving in the large groups seen at other vent sites in the Mariana arc. Is something replacing them in the hierarchy here? Is there something unique about these habitats that makes it difficult for them to prosper? Verena suspects there is something different about the way the fluids are coming out from the seafloor here, as well as their specific chemical make up. We will need help from the microbiologists to understand more about what is happening with the bacteria.

Microbes are the drivers of organic life here, thousands of different bacteria and archaea live beneath the seafloor and in the venting fluids, converting these chemical flows into food for the vent animals and other microbes. Just because we can not see microorganisms on SuBastian’s camera, they still have a fascinating story to tell us. Julie Huber is culturing these microbes in ovens on board the ship, and they are living happily in 80 degrees C without oxygen, munching on hydrogen and sulfur. Julie is looking to apply innovative techniques back on land to see how the different groups of microbes are working with the chemicals in these fluids. Which microbes are allowing the chemosynthesis to occur, how much carbon do they produce, and who is present here as compared to other vent sites?

Exploring brand new ecosystems in some of the most extreme conditions on the planet takes a massive team effort. To get on this cruise you have to be a top specialist in your field. Everyone has slightly different perspectives and priorities, but no-one is an island on this trip. Each scientist shares the dive time and focus to collaborate on this complex puzzle. Only by getting a full chemical, geological, micro and biological picture of the back-arc area can we learn what makes these extreme environments function. As the ROV ascends and comes back on board, it is late in the evening. The science team begins processing, preparing and logging all the samples. No sleep before midnight in the quest to get everything ready to go in again at sunrise the next day. It’s been an intense trip, but everyone prefers it that way, the samples collected will form the basis of a raft of studies and papers in the coming years, but for now we prepare to dive again to make the most of our precious time aboard R/V Falkor.

We have one new vent site we want to cover on the trip, and conditions and technical problems have made diving impossible in the last three days. We did a CTD cast which confirmed a hydrothermal plume is still showing at our final dive site. We are in the right place. Everyone is getting prepared, and crossing their fingers for one last set of dives in a brand new location.

As the climate and oceans change, understanding these environments becomes increasingly crucial. From specific questions, like “how are these snails producing shells in this acidic environment, and what can this teach us about species struggling in shallower waters?” to “how is the plumbing of the vents revealed by the chemical make up of the fluids?” These volcanic and microbial processes are billions of years old, starting long before humans arrived on the scene. In our quest to pursue balance in a changing world, the prize of understanding environments like these becomes increasingly valuable.