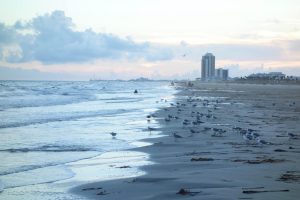 Galveston, Texas, is built on a barrier island of the Gulf of Mexico 45 miles from Houston. Ned Rozell photo.

GALVESTON, TEXAS — Here on this alligator-shaped mound of sand, the temperature of 88 is the warmest recorded this late in the season since weather observers started writing them down in 1871. Sitting here in the shade, absorbing a sultry breeze, I’m seeing few things that remind me of Alaska.

But there are connections between the Deep South and Far North: some of the shorebirds probing the beach on the Gulf of Mexico emerged from eggs this summer on northern tundra. The tankers sitting just offshore awaiting  transit to Houston are filled with the same liquid that fuels the Alaska economy. And this barrier island 27 miles long and two miles wide is at constant risk of being hammered by a storm.

Alaska has a few places like this. Shishmaref is probably the closest parallel, but there are more. I’m here at a conference called Living on the Edge put on by the Galveston Historical Foundation. Conference organizer and former Alaskan Hal Needham asked me to talk about Alaska communities at risk. He’s interested in those threatened by Bering Sea storms larger than hurricanes, the thawing of ancient ground ice and increased storm exposure that comes with a shorter season of sea ice.

Galveston is one of those places an Alaskan visits and notices almost everything is different. Unlike the opposite experience in Alaska, eyeglasses here fog when you step outside, and, departing air-conditioned coolness, you collide with the dewpoint of warm, moist air. Delicate yet somehow rugged monarch butterflies flit around on garden flowers on their way to Mexico. Grand old Victorian buildings stand shoulder to shoulder on every street. Many of them have plaques regarding the big storm of 1900, the worst natural disaster in U.S. history, killing at least 6,000 people. A few of these buildings survived it intact, but not many.

Not long after that hurricane, all these structures were jacked off the ground. St. Patrick’s Church required 700 jacks. The buildings were then propped on timber stilts.

From a canal dug across the island, men pumped a slurry of Gulf of Mexico sand and salt water beneath the stilted houses. The water drained and left the sand behind. Less than two years after the 1900 hurricane, city workers deposited more than 16 million cubic yards of sand beneath 500 city blocks.

They elevated the island about 17 feet on the Gulf of Mexico end, where there is now a seawall 17 feet high and 10 miles long. The island now slopes downward toward the Galveston Bay end, to allow for drainage of storm-surged waters.

Those Pyramid-of-Giza efforts were the people of Galveston’s response to the superstorm of 1900, when the hurricane eyewall passed directly over the island.

The raising of Galveston took uncommon effort and money, the latter of which was due to the city’s turn-of-the-century affluence. The Strand, now a street lined with shops and pubs catering to tourists, was known as the Wall Street of the south. The port of Galveston was the equivalent of Ellis Island in the late 1800s.

For all its sweaty engineering efforts, Galveston’s downtown was flooded to eyeball level in 2008. Many Alaska villages face the same unsure future. A 2009 erosion assessment by professionals from the Army Corps of Engineers listed 16 Alaska communities at significant risk from river or ocean waters. Newtok, Shishmaref and Kivalina are already losing structures to river or ocean.

With more than 50 feet of land falling to the Ninglik River each year, Newtok residents are moving to a new village site 12 miles upriver. Later formation of sea ice and earlier breakup of that protective coating are exposing Shishmaref and Kivalina to more giant storms. Both communities are also in need of an expensive and complicated move.

There are no easy answers for those villages. Neither is there one for Galveston, hit in 2008 by Hurricane Ike (which surged six feet of salt water into downtown). Amid all these beautiful buildings are vacant lots.

As a Galveston native said today when she was remembering Hurricane Ike, “We’ve got to move off this island too, just not as quick as you do.”

NOTE: In last week’s column, I made a mistake regarding the Aleut village of Attu. Japanese soldiers captured the residents of Attu during World War II, taking most of them to Japan as prisoners. Villagers on other Aleutian Islands were relocated by the U.S. government.