Today is Opening Day for Major League Baseball.  In honor of the start of baseball season, I’m going to discuss some career advice with a slant towards baseball.  As an Earth and space science bonus, watch this video about the special mud used to scuff up baseballs which features Prof. David Velinsky discussing the conditions in the Delaware tributary where the mud is collected.

Be a Five-Tool Player

Though having a niche can increase marketability, it can also have a reverse effect if supply of your niche outweighs demand.

In yesterday’s broadcast of the New York Yankees-Tampa Bay Rays game, David Cone discussed the Yankees’ off-season acquisition of Chris Carter.  Last year, Carter led the National League with 41 homeruns, tied with Nolan Arenado of the Colorado Rockies, but in spite of this, his contract wasn’t renewed and he had trouble finding a team that would sign him.  Why wouldn’t teams want someone with so much offensive power?  Along with the homeruns, Carter also boasted a rather poor batting average and a rather high strikeout rate.

While having a specialty can be useful, be wary of the trade-offs.  Many employers are looking for a complete package, what’s known in baseball as a five-tool player.

To frame this example within the geoscience careers, you’ve applied for a faculty position and your research is great, but your presentation skills are lacking.  Unfortunately, the department places a heavy emphasis on teaching, and another candidate with similar research interests but a depth of teaching experience gets the position.

Learn how to play more than one position

Did you know that at one point, baseball players wore uniforms that denoted their position rather than everyone wearing the same outfit?  It was a short-lived experiment in the 1882 season of the National Association.  Can you imagine if players today had to switch shirts when changing positions in the middle of the game? 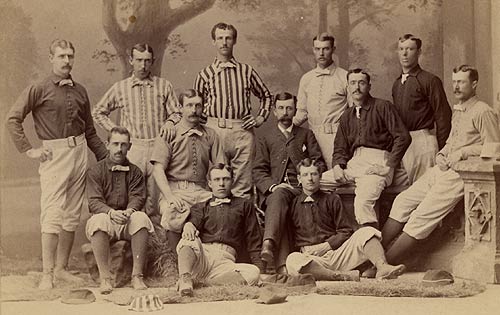 The Detroit Wolverines of the National League, 1882. From the Baseball Hall of Fame’s online exhibit, “Dressed to the Nines: A History of the Baseball Uniform.”

“Learn more than the position you play” probably seems close to “Be a five-tool player,” but there is a difference.  Some positions are strikingly similar to others. For example, if you can play second base, playing shortstop is not much different.

What I’m getting at here is the idea of transferable skills.  Were you the direct supervisor of an undergraduate research assistant?  That’s managerial experience.  Are you in the process of defending your thesis?  That’s research experience, time management, presentation skills, and the list goes on.  Transferable skills were initially intended with a particular task in mind, but their usefulness carries over when applied to a new task.

While certain skills are more transferable than others, with a little bit of work, most skills and experiences can be reframed for the situation. Understanding that experiences are worth more than their face value will help you to identify job opportunities and make it easier to market your value to perspective value.

One of the most important elements to success in baseball is pitch selection.  Being able to hurl a 100-mph fastball will certainly help a pitcher, but good pitchers become great with practice.  Understanding the batters that they’ll face and perfecting their form so that they can consistently throw the pitch are both ingredients in the recipe for success.

In your career, how you pitch yourself to others will be critical to your success.  While some are natural at selling themselves, it can be difficult for many of us.  Just as it is with big league pitchers, practicing your pitch will go a long way.

Knowing your audience, just like pitchers need to know the batters they’ll face, will also help.  Even the most perfect pitch won’t get some batters out.

For more discussion about creating your pitch, you can check our webinar from last month, “Understanding Your Brand: A Recruiter’s Perspective,” or this advice from AGU Sharing Science on crafting an elevator pitch.

Nathaniel Janick is the Career Services Coordinator at the American Geophysical Union.