The Painted Desert and Petrified Forest The colorful layers of the painted desert formed in the triassic period when meandering tropical rivers deposted layers of mud and clay. Some of these layers are due to volcanic ash choking up the rivers and altering to clay.

Friday was the last day of the field trip, and we spent it at the Petrified Forest national park. We were there to study the colorful clays and river deposits, but we began the day with an unexpected bonus: our guide, Bill Parker, is a paleontologist at the park, and he took us to see some of the skeletons that have been found there, and the people who work on them. I spent much of my childhood wanting to be a paleontologist, so to actually see it in action was a special treat. We learned that there is recent evidence that almost all dinosaurs had feathers! We also got to see the reconstruction of what one of the animals may have looked like based on the skull, which was something that I didn’t realize that paleontologists did. Matt Brown, a fossil preparer at Petrified Forest national park chips away at the protective plaster around the skull of an alligator-like dinosaur. A reconstruction of what one of the dinosaurs being studied at the park may have looked like, based on its skull.

After the paleontology lab, we continued on to the painted desert badlands, which were the real reason we came to the park. These beautiful formations were formed when Arizona was a flat, tropical floodplain. Many of the layers are actually the deposits from broad, meandering rivers. When they overflow their banks, they deposit sediment in broad layers. In other cases, ash from volcanic eruptions blanketed the landscape, and was altered by the water of the lakes and rivers and rain to become clay minerals like bentonite. The clays expand when they get wet and contract when they dry, and are quite soft to begin with, so that it is very difficult for plants to get a foot-hold. This leads to broad expanses of “badlands” terrain: heavily eroded buttes and mounds of the brightly colored clays and sandstones. The badlands terrain of the painted desert. The clays in the rocks expand when wet and contract when dry, creating an unstable surface where plants can't get a foothold. The bright colors are from different types of clay, different types of deposits, and different degrees of oxidation.

We spent a long time studying an outcrop that used to be part of an ancient meandering river or delta. The layers deposited on the shore of a river tend to be angled in toward the riverbed, so by looking at the orientation of thelayers, you can guess at what the river might have looked like. 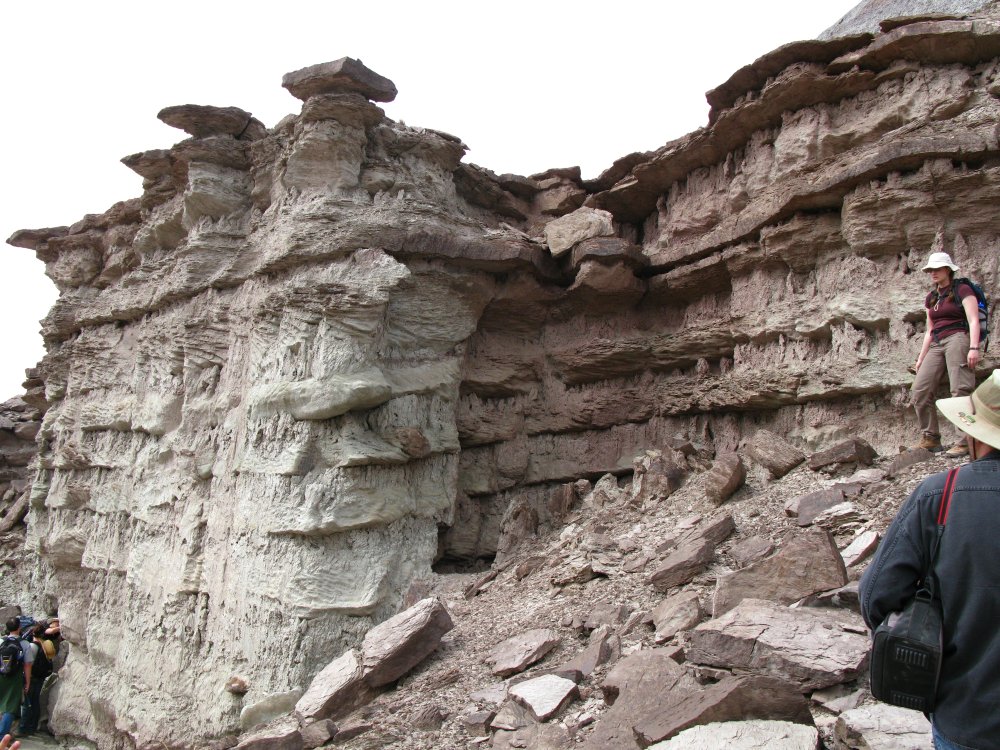 Clay-bearing river or delta deposits. These may have been deposited extremely rapidly, since there was the fossil of an 8-foot-tall horsetail in the outcrop, still standing upright and crossing several layers!

We were especially interested in this outcrop because we found fossils of giant horsetail plants in them, and the fossils were upright, as if they had been covered in sediment while still alive. That would mean that something like 8 feet of rock was deposited extremely rapidly, before the horsetail died and fell over! We speculated that this could happen during a particularly heavy monsoon season. In the layers with the horsetail there were also some very large rocks that were rounded as if they had been transported by the river. Jeff Martz, one of our paleontologist guides, pointing at the two giant horsetail fossils. Click for full-resolution to see the fossils more clearly. A close-up of one of the horsetail fossils. The green part is a couple of inches across.

After puzzling over the river deposits and trying to reconstruct their story, we ended the visit to the park by taking a look at the petrified forest. Our guide, Bill Parker, told us that all of the petrified trees in the park are missing their bark and branches, and that they likely were part of log jams in ancient Triassic rivers. He pointed out that it is almost impossible to find a modern river that hasn’t been modified by humans, and that in their natural state, these meandering rivers would have been clogged with dead trees. When the trees were buried by sand and ash, the silica in the rocks was dissolved in the water and precipitated out in the cells of the wood, gradually replacing organic matter with silica. The silica logs are much more resistant to erosion than the sandstone in which they are embedded, so as the rock erodes away, the logs are left sitting on the surface. Petrified logs, formed when silica replaced the organic material of the wood, are more resistant to erosion than the sandstone in which they formed, and end up lying on the surface.

You may be wondering what all of this has to do with Mars. Well, the paleontology has very little to do, but the processes involved are quite relevant. Mars likely had liquid water in its past, and certainly had ash and sand deposits. Places like Mawrth Vallis have clay-bearing rocks eroded into channels and buttes and mounds, very similar to the clay-bearing rocks of the painted desert. The same conditions that prevailed to preserve the petrified forest and the dinosaur and plant fossils may also preserve more basic biomarkers, capturing evidence for a habitable Mars.

That concludes our geologic tour of Arizona! I went the first version of this trip two years ago, and then as now I was humbled by how complex and difficult to interpret our planet is, even when we can reach out and touch the rocks and analyze them at our leisure. On the other hand, there were many things that we saw from the ground that were much easier to interpret from aerial and satellite data. When you’re on the ground, it is much harder to get an feeling for the overall shape of what you are looking at. A combination of both orbital and ground-based studies is very important to really begin to understand the geology in detail, and even then there is a lot that we can’t figure out!

This trip has also impressed upon me how much more geology I need to learn. I need to know sedimentology and stratigraphy if I’m going to be attempting to read the story hidden in the layered pages of rock on Mars. But for now, I at least know what it is that I don’t know, and that’s a good start.

The Painted Desert and Petrified Forest