A half session at LPSC was devoted to observations and analog work on Martian gullies. These apparently young, water carved features are one of the many big puzzles on Mars today.

Gullies, like the one shown above, were discovered on Mars back in 2000 in images taken by the Mars Orbiter Camera, the first high-res camera in orbit around the red planet. They were found in dune crests, crater walls, scarps, pretty much all over! Their age and origin was widely speculated on, but remained unclear. Then, in 2006, one gully was observed to change! Watch for the bright swath:

Of course, this caused all sorts of speculation on what had put the bright deposit in the channel, most of which was focused on the role of water. Pure water flows, water/ice slush flows, and mud flows were all cited as possible deposition mechanisms. Since then, dust avalanches have also been proposed. All of these, except dust flows, require water activity to be happening on Mars today. This lends support to the idea that there may be niches where water is metastable on the cold and super arid surface of Mars.

So where is the water coming from? The popular theory is snow melt. Dickson and Head briefly mentioned an analog for this on Earth: the Antarctic dry valleys, where regional and/or average climatic conditions are not conducive to snow melt, but gullies are actively forming! 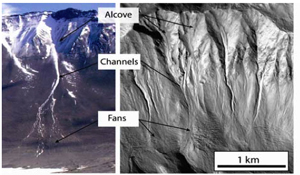 Of course, the fluid probably isn’t pure water, but rather some combination of water, ice, and mud. Kate Coleman presented a series of scale model lab experiments where they compared the features created by liquid water flows to those created by icier “slush” flows, and the slush flows seemed to create features more like those we see on Mars.

If the fluid was mostly water, it might leave behind evaporites (salts, etc.), and we might expect to see an evaporite chemical signature in the new gully deposit. We haven’t, and although this might just be a resolution issue, something else might be going on. Jennifer Hardmann presented an analog study of mudflows in the super arid Atacama desert, and showed that mudflows can create the light-toned deposits like the one shown above. Mudflows are good particle sorters, and the finest particles tend to rise to the top of the flow. So, after the mudflow dries out and becomes dessicated, the flow will appear lighter toned because of the smaller particle size, but still has the same composition as the surrounding terrain.