Our Past Climate Is A Warning For the Future 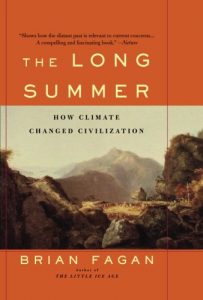 There are some excellent books for non-scientists about our climate, but some of the best are written by Brian Fagan- an Archaeologist! His book The Long Summer is superb, and I am currently listening to a series of lectures he made for The Great Courses. Any story of human history is incomplete without looking at the role of climate, and in The Long Summer, Fagan points out that all of written human history has happened during the warm period after the last ice age. This is the Holocene, and it has indeed been our long summer. That summer though has seen changes and those changes in temperature and precipitation have had big impacts on everyone from nomadic hunter-gatherers and powerful Pharaohs alike.  Fagan has a more recent book, The Great Warming, and it has even more on how climate changes have impacted the last 1000 years.

Now, everyone who writes about climate science will hear “The climate is always changing” from those who fear (for economic/political reasons) the change to clean energy. It’s such a powerful piece of propaganda because it’s true, but it is also just as true that we are warming our climate from greenhouse gases and the maths and physics on this is well understood. So, this is actually some very bad news, because if we add in the greenhouse changes with the fact that our climate can be rather hostile at times, we find ourselves in double jeopardy (I’ll take atmospheric physics for $1000 Alex.).

The takeaway here is that it’s not just a change in temperature or even a rising sea that’s the problem.

The problem is food.

Long droughts caused whole civilisations to fall, and this was before we started fooling around with the planet’s thermostat. Almost all climate models show drying over the American Plains and the Southwest and this includes croplands that feed us and the World (all while keeping our trade deficit to reasonable levels). That’s why you should at least read the plain language summary in this new paper in the AGU journal GRL: In case you missed the headline: “We present a new reconstruction of runoff ratio for the Upper Rio Grande basin back to 1571 C.E., which provides evidence that the declining trend in runoff ratio from the 1980s to present day is unprecedented in (the) context of the last 445 years.”

It’s already started and it’s about to get worse. We need to start talking about how to solve it because what you may have heard on Game of Thrones is wrong. Winter is NOT coming.