The GOES-R (now GOES-16) instruments continue to be checked out and calibrated.

This from, NASA today: 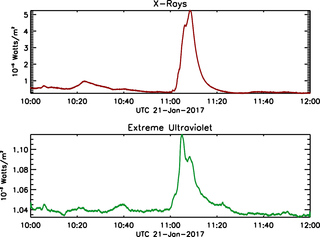 Solar flares are huge eruptions of energy on the sun and often produce clouds of plasma traveling more than a million miles an hour.  When these clouds reach Earth they can cause radio communications blackouts, disruptions to electric power grids, errors in GPS navigation, and hazards to satellites and astronauts. The EXIS instrument on NOAA’s GOES-16, built by the University of Colorado’s Laboratory for Atmospheric and Space Physics in Boulder, Colorado, measures solar flares at several wavelengths and improves upon current capabilities by capturing larger flares, measuring the location of the flares on the sun, and measuring flares in more wavelengths. The GOES-16 EXIS will provide forecasters at the NOAA’s Space Weather Prediction Center with early indications of impending space weather storms so they can issue alerts, watches and warnings.

The figure shows an example of EXIS observations at two different wavelengths of a flare that peaked at 11:05 UTC [6:05 a.m. EST] on January 21, 2017. This is a relatively small flare, yet the brightness of the sun in soft (lower energy) X-rays increased by a factor of 16. EXIS will give NOAA and space weather forecasters the first indication that a flare is occurring on the sun, as well as the strength of the flare, how long it lasts, the location of the flare on the sun, and the potential for impacts here at Earth.

NASA successfully launched GOES-R at 6:42 p.m. EST on November 19, 2016 from Cape Canaveral Air Force Station in Florida and it was renamed GOES-16 when it achieved orbit. GOES-16 is now observing the planet from an equatorial view approximately 22,300 miles above the surface of the Earth.

NOAA’s satellites are the backbone of its life-saving weather forecasts. GOES-16 will build upon and extend the more than 40-year legacy of satellite observations from NOAA that the American public has come to rely upon.