Take a look at the following tweet from THE UNITED STATES HOUSE OF REPRESENTATIVES Science Space and Technology Committee:

Actually the very data they linked to shows it DOES fit. Fortunately, some REAL scientists let them know that they are UNQUESTIONABLY WRONG. 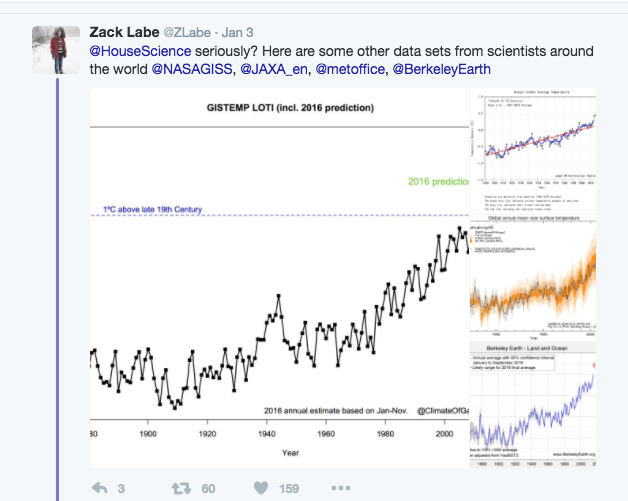 and some more comments from people living in a world based on fact: Somehow I think the person doing these tweets has ZERO background in science. There are a couple of things you should know about satellite measured temperatures:

SOME SCIENCE FACT AND TRUTH
The tweet by the House Science Committee today is factually wrong and was shown to be so after a congressional hearing last year. You can read about it courtesy of Dana Nuccitelli at the Guardian, with quotes from Dr Ben Santer who is an expert on the subject. Dr. Santer and Carl Mears (another expert on the subject) wrote a piece for Skeptical Science about this decades old myth as well. It is a superb takedown, with scientific facts, of this irresponsible tweet by the House Science Committee.

I think those who believe in scientific method should let them know. Coming from a committee of the Congress, this was nothing less than shameful propaganda. How far we have come from the nation that first went to the Moon and landed a rover to explore Mars. This is not about politics, it’s about science, data, and truth. I always find it amazing that someone with no training in science can tell every major science body on Earth that they are wrong, but I find it astounding that they can do this never having a clue as to how ridiculous they look. How very sad it is that a nation once the science giant of the world has come to this…