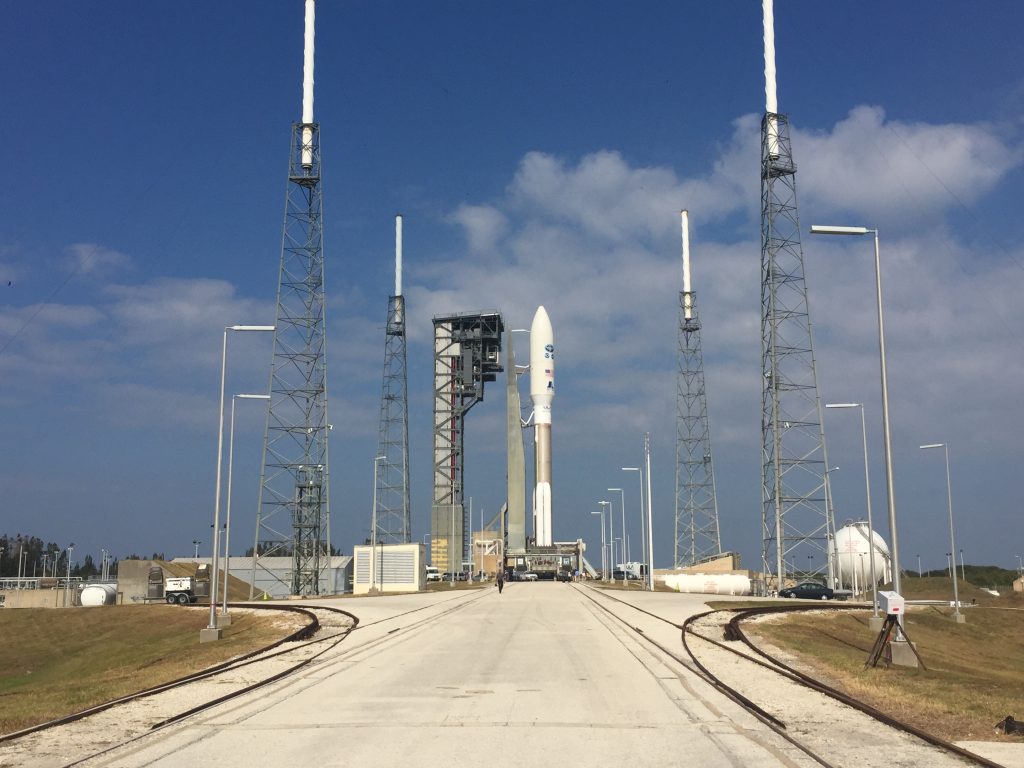 NASA took me to Pad 41 this morning, as the Atlas booster and the GOES R satellite rolled onto the pad. Dan’s Photo.

I’m one of about ten meteorologist who work in TV who were invited by NASA to attend the GOES-R launch tomorrow at 5:42 PM EST. NASA took us out to the coast to watch the roll out at 10 AM, and once the vehicle reached the pad, we were allowed to go as close as 150 yards from the pad (See photo above). The weather still looks good for launch tomorrow, and it should be a beautiful event with the launch happening just after sunset. The booster will climb into the sunlight and local NASA folks call it a rainbow plume, with a setting sun lighting up the vapor trail. In past launches the vapor trail has been very colorful and my fellow meteorologists are looking very forward to it. 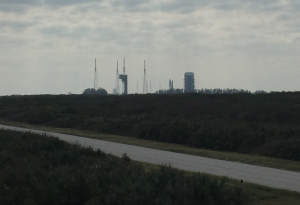 The Atlas Booster with GOES-R on top rolls to the pad Friday morning. Picture by Dan Satterfield.

I’ve seen more than 9 launches from here at the KSC, both manned and unmanned, but this is one launch that will really impact what I do everyday. We forecasters have been talking about this satellite for over ten years, and tomorrow is the day it launches. It will take 6 months to check out, and no decision has been made on where to locate it. It will be either the GOES East or West, but most of us think it will go East because of the global lightning mapper (GLM) which is a revolutionary tool that will greatly improve severe weather forecasting. This is why I am betting on a location that will see the eastern half of the U.S. best, but no decision by NOAA has yet been made.

The GOES-R data will be downloaded at Wallops Island, Virginia, processed into an image, and sent back to the satellite where it will be rebroadcast down to receiving stations. GOES-R will send an image every 5 minutes and if needed during high impact weather events, every 30 seconds. The resolution will be much better than the older GOES, and the ability to see total lightning in real-time is nothing short of revolutionary. It is like having an old black and white TV with 5 channels and then suddenly you have an HD set with 16 channels and two movie channels added in!

This launch needs to work. The U.S. is behind the game in both numerical weather modelling and in weather satellites. Europe and Japan both have satellites that are more advanced than the present GOES. If GOES-R makes it to orbit and has no problems, we will have the most advanced weather satellite again. At least until Europe launches a new satellite in 3 years.

GOES-R is likely the most complex communication satellite ever built. There are a lot of crossed fingers in the Earth science community tonight…