Tidal Troubles In The Mid-Atlantic 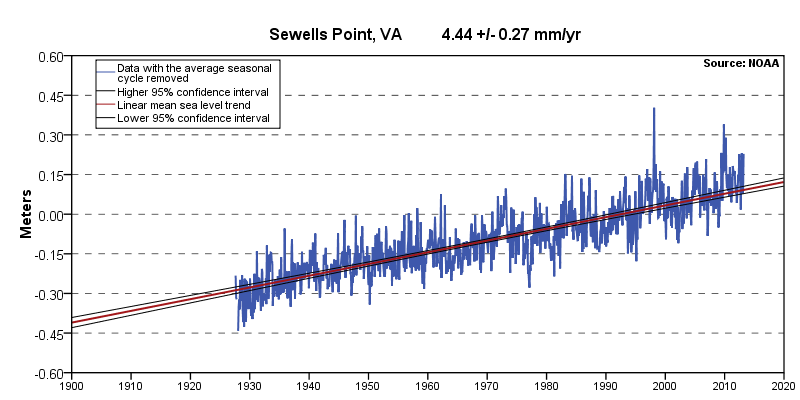 Sea Level around the Chesapeake Bay is rising at a rate that is much faster than the oceans on average.

NOTE: This post is based on some research I did for an on-air story that aired today:

Sea level rise is what’s called a slow motion disaster. These kind of events tend to be blamed on the symptoms rather than the cause, and often the preparation/ response to these type of events is inadequate. This is much the case where I live and work here in the Mid-Atlantic, on the Delmarva Peninsula, where the sea level is rising at a much faster rate than almost anywhere in the U.S., except parts of Louisiana, and South Florida. What we consider a strong nor’easter would have only brought minor beach erosion 50 years ago, and a major nor’easter will do far more damage now compared to the 1950’s. What is normal weather to us, would seem much different to someone who lived on Delmarva in the first half of the 20th century. It’s much warmer now, the growing season is longer, and the ocean is much higher than it was then. So why is sea level rising so much faster here in the Mid-Atlantic? The answer is ice. Just 15-20 thousand years ago, as the ice age was ending , there was up to a mile of ice on top of New England, pushing the crust of the earth down into the mantle. As it did so, much of the Mid-Atlantic rose up in what we call a fore-bulge. You can see this when you put your foot down in wet sand near the ocean surf. Notice how the sand around your foot rises up some. This is a fore-bulge.  Once the ice melted, the land rose, and here on the Delmarva Peninsula, where the fore-bulge was, the land started to sink, and it still is.

By coincidence, much of the Mid-Atlantic around the Chesapeake Bay is sinking, at just about the same rate as the ocean is now rising, due to warming and glacier melt.

How is this affecting those who live near the coast? 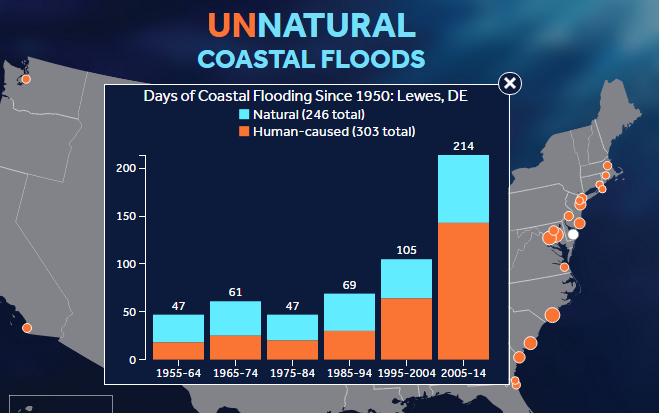 Miami, and New Orleans, are already spending millions of dollars to hold the waters back, and the cost to keep the popular tourist beaches wide, will become more and more expensive. Long time friend  Bob Henson is the author of the Rough Guide to Weather, and The Thinking Person’s Guide to Climate Change, and we talked recently about how sea level rise is a slow motion disaster that the public is just waking up to. According to Bob ” a lot of folks are experiencing nuisance flooding, but this is an early expression of how we are going to experience sea level rise. It’s not going to be necessarily catastrophic in any one instant, it will be a gradual build up, punctuated by these experiences. While in other places it will be a storm every few years and all of a sudden the effects of that storm will be boosted, just as Hurricane Sandy’s floods were almost a foot higher because of the century of sea level rise.” 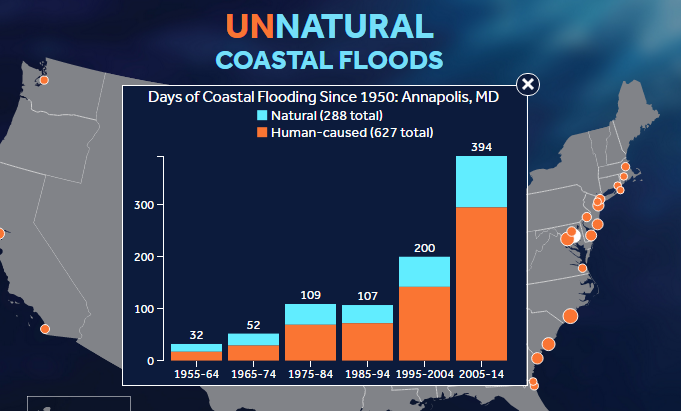 Research on the increased flood days was done by Scientist Ben Strauss (and others) at Climate Central in Princeton,NJ.

Ocean expert Brian McNoldy, at the Rosenstiel School of Marine Science in Miami, was astounded to see how fast the ocean is rising off of Miami and this explains the serious “King Tide” flooding that has become a real problem there. Brian says “these low-lying areas experiencing these king tide floods is nothing new for Miami Beach, this has been happening a long time. But year by year, as the sea level creeps up, more places flood, and the places that used to get a little bit of flood now get a lot of flooding, and instead of flooding for one or two days around the full moon in October, its now a week around the full moons in Sept. October, and November.”

Within the last 6 months, there has been new published research that shows a sea level rise of at least three feet  around much of the Mid-Atlantic by the year 2100. This means a storm 25 years from now, like last winters damaging nor’easter will do even more damage than this one, and a storm just like it 50 years from now will be far worse still.

The science is now overwhelming that it is going to cost more and more to keep those protective dunes in place over the coming decades. Even if the world quickly reduces the output of greenhouse gases, a 2-3 foot sea level rise is already baked into the system. With an economy that is based on tourism, this is one slow motion disaster that communities will need to react to better than humans usually do when facing a slow motion disaster!

Note: There was an excellent detailed report from Reuters, about sea level rise in this region, published in 2014. It’s science reporting at it’s best and most accurate, and well worth a read.