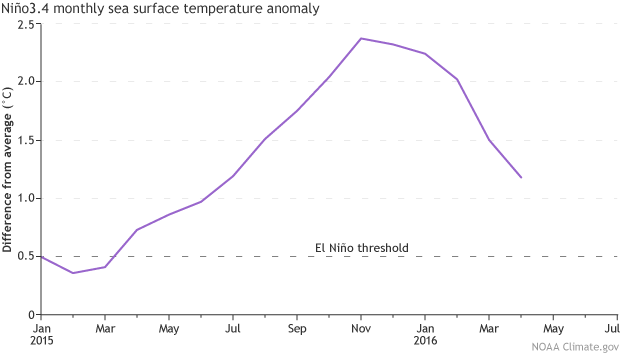 NOAA has issued a La Nina Watch for the fall, and there are growing signs that the super El Nino of last winter will become a La Nina event for our next one. It is too early to say how strong a La Nina will develop, but the odds are around 3 out of 4 that we will see a La Nina winter. La Nina events tend to bring cooler than normal water to the surface over the Eastern Pacific, and this brings far different conditions to North america than an El Nino. In general, the La Nina impacts are not as severe, but a La Nina does increase the risk of an active hurricane season. Just how active the Atlantic hurricane season will be, will depend on how quickly the water temps. in the Pacific cool, but it’s likely that it will be more active by far than last year.

Numerous forecast models show La Nina conditions will develop by the fall, but models are not reliable enough this far out to say how strong an event may develop.

FYI: It is not unusual to have a La Nina after an El Nino, since these events are a part of what is called the El Nino Southern Oscillation, and when the system is perturbed into one state, it tends to rebound back to the opposite state. There is an interesting post on the NOAA El Nino blog (by Dr. Amy Butler at CIRES) related to El Nino and sudden stratospheric warming events. I’ve never heard about this before, and its well worth a read!