Major Advance For Weather Prediction In The U.S. This is a forecast made by a new experimental global forecast model that NOAA is testing. We may finally be about to see a long overdue improvement in computer power, to make more of these more sophisticated models possible. Read the guest post below from Cliff Mass for more info.

This is a guest Post from University of Washington Professor of Atmospheric Sciences Cliff Mass. It is a re-post from his popular blog here.

This is important. Today, NOAA’s administrator Kathryn Sullivan announced that the National Weather Service will acquire two very powerful CRAY supercomputers to support U.S. numerical weather prediction.   A machine that will FINALLY allow the U.S. to do world-class forecasting.  (The press release is here).

In a number of my previous blogs, I complained about the inferior computing resources available for numerical weather prediction in the National Weather Service (NWS).  I noted that groups such as the European Center for Medium Range Weather Forecasting (ECMWF) and the UKMET office have had substantially more skillful global predictions and that their superior computer resources gave them a substantial edge.  I have also described how the U.S. has lacked high-resolution forecast ensembles (where the model is run many times), which undermined the NWS ability to predict severe thunderstorms and other small-scale features.Everything can change now, IF the National Weather Service uses these powerful new computers wisely.So here is why you should be excited.Numerical weather prediction is the underlying technology of weather prediction and it dependent on computer power.More computer power allows more resolution:  the ability to simulate smaller-scale weather features (like thunderstorms or mountain precipitation)More computer power allows better physics, which includes the description of how clouds form or the turbulent processes in the lower atmosphere (among others).More computer power allows better data assimilation, the use of observations to create a physically consistent three-dimensional description of the atmosphere.More computer power facilitates ensemble forecasting, in which running the model many times allows forecasting the probabilities of weather events. 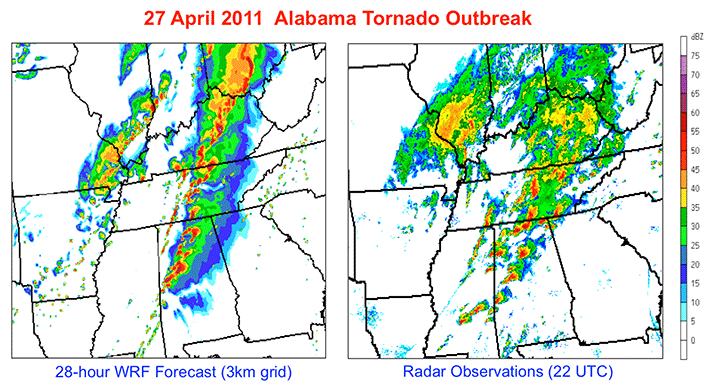 The DetailsCurrently, the National Weather Service has two computers (one is for backup and research), each with a throughput of roughly .21 petaflops (quadrillion operations per second).   The European Center for Medium Range Weather Forecasting has two computer that run at roughly 2.5 petaflops.   In other words, they have ten times more computer power to do FAR LESS than the U.S. NWS (the European Center does not do high resolution local prediction, the NWS does).   And it shows.This month the National Weather Service will upgrade to two machines of .75 petaflops.The new machines announced today will be 2.5 petaflops each, roughly TEN TIMES what we have today.A major part of the announcement is that the new computers will be provided by CRAY, the leading supercomputer maker for numerical weather prediction (they are supplying the machines to the European Center and the UKMET office, among others).   IBM, who has held the computing contract with NOAA, could not supply the machines, because they sold their server division to a Chinese firm, Lenovo.  Thus, they subcontracted the acquisition to Seattle-based CRAY.I have learned that the new machines will be CRAY XC-40 systems.    I suspect they will each have 50,000-100,000 processors.

The PotentialProperly used, this new computer power can revolutionize and greatly improve the skill of U.S. numerical weather prediction, with huge positive impacts for the country.  Problems in U.S. numerical weather prediction have not been limited to lack of computer power and these problems need to be addressed, such as an inability to entrain the huge knowledge based in the huge U.S. academic research community or inefficiencies/duplication of effort in U.S. government research and development.  These are issues that must be taken on now.   But the excuse of lack of computer power is gone and a renaissance in U.S. NWP is possible. Finally, it is important to acknowledge the leadership of NOAA’s Kathryn Sullivan and NWS Director Louis Uccellini in making this happen.  The environment in NOAA seems to changing in a positive way and they deserve some credit for it.