This past July was the 4th hottest on record and for the 38th July in a row, the global temperature in July was above the average July temperature in the 20th century. Not only that but the same thing has happened for the last 358 consecutive months, and that’s pretty amazing when you think about it. 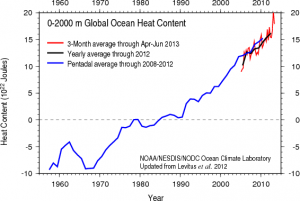 The steadily rising heat content in the oceans is the real planetary thermometer. From NOAA (hat tip to Real Climate for publishing it.)

You may have seen some headlines this week about a “global warming pause” that seem to call this into question, but the headlines are misleading, and not the science. The planet is still warming, (and it has to be because the sun has not gotten any dimmer, and greenhouse gases are still climbing) but the surface air temperature has stopped rising as fast over the last decade, and scientists have been looking to see where the heat has been going. Most scientists have had a suspect for a long while, and a new paper published this week has found the smoking gun: The heat is going into the oceans. That’s where most of the planet’s heat is anyhow, and the oceans hold far more heat than the thin mantle of air surrounding our planet.

The goal of scientist is to make the math balance out, and a paper published in SCIENCE this past week indicates that much of the heat is going into the cold deep waters of the South Atlantic, and around Antarctica. Not all researchers in the field agree, and another paper last year had evidence that it was mainly going into the Pacific. It is going into the oceans though, because the Earth’s heat balance has been shifted by the greenhouse gases that are rising steadily.

I read in several news articles that this so-called hiatus in the warming has given ammunition to climate skeptics, but it really hasn’t. There are almost no real skeptics left. Yes, there are a lot of folks (who know very little about atmospheric physics) that think it’s a hoax, but those living outside of a rigid bubble of confirmation bias know that the facts are overwhelming. The news media (with the exception of Fox News and a couple of others) is treating them in much the same way as they do other conspiracy theorists now.

One last thing. You might be surprised to learn that almost all climate model simulations show periods where the warming slows down or stops for up to ten years or more, and this includes models that show warming of 5-6 degrees C by the end of this century. When the surface air temps start warming again, they will likely rise rapidly.