This is may be the last full disk view ever from the GOES 13 (GOES EAST) weather satellite at 3 GMT Wednesday. 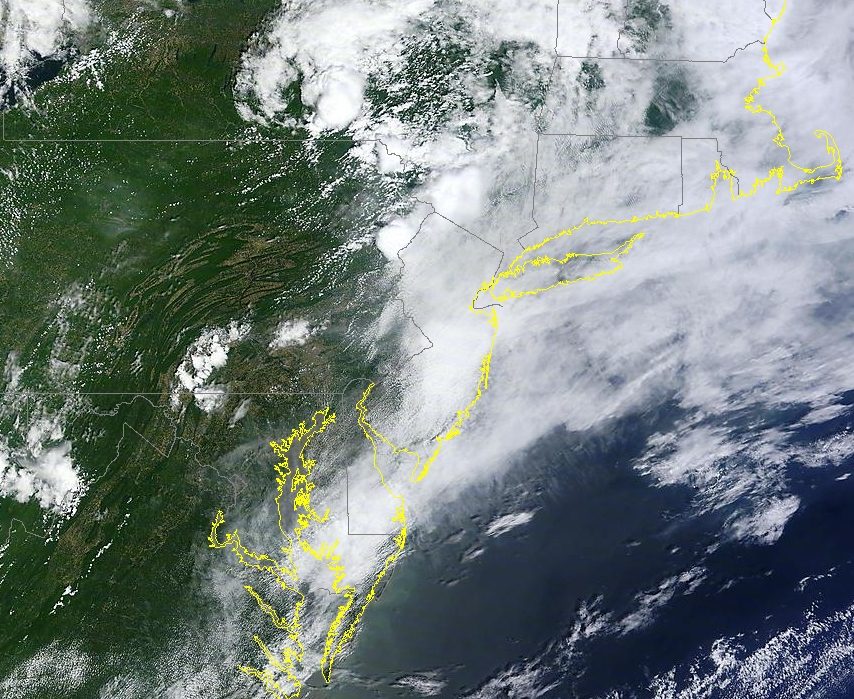 I used this image from the NASA Aqua satellite on air today since there was no GOES data. The image was taken at around Noon, as it passed over Eastern Maryland and Delaware.

GOES 13 is one of two Geostationary Operational Environmental Satellites used for forecasting in the Western hemisphere. Late word tonight is that an attempt to revive it has failed and the backup satellite GOES 14 is being activated  We should start seeing some images by midnight Eastern USA time. It will take another day to get normal coverage back. The GOES West satellite does give some coverage of the Eastern USA but it is poor at best and there is little coverage of the tropical Atlantic.

These satellites make accurate numerical weather forecasting possible beyond just a few days because between the GOES and lower polar orbiting satellites the models get much of their starting point information from these instruments. The satellite receiving station is just down the road from me (here on the Eastern Shore of Maryland) at Wallops Island, Virginia and engineers there have been looking at the situation all day. New dishes are being built at Wallops to receive the GOES R satellite data that will go up in two years. This satellite is a giant leap forward and will revolutionize forecasting much like Doppler radar and dual polarimetric radar is doing to severe storm nowcasting. We will be able to monitor severe storms in almost real-time with GOES R!