Seriously Behind; U.S. Near the Bottom In Weather Forecast Computer Power (Guest post by Cliff Mass) The difference between numerical weather prediction models grows with time. In most cases these days, the model of choice is the one run in London by the ECMWF.

Besides the increasing gap in weather satellite technology, Europe and Japan are also well ahead in computer power available for numerical weather prediction models. Almost every U.S. forecast meteorologist this winter has relied on the global model from the European Center for Medium Range Weather Forecasting, (based in London) rather than the NOAA Global Forecast system. Short range forecasts are handled well by the NOAA high-resolution models centered over North America, but for forecasts beyond three days a global model is needed.

Cliff Mass has an excellent post on his blog about the serious gap in computer power and I reprint it here with his permission. While I do not agree with everything here, (For instance, the computer needs are very high for climate models, and they are vital to predict the effects of increasing greenhouse gases.) but make no mistake about it, the 7 day forecast you see on TV everyday is based more and more on a model based in Europe, not in America.

It happened again. A major storm hit the northeast U.S. and the U.S. global model lagged badly behind the predictions of the European Center for Medium Range Weather Forecasting (ECMWF) .  Just as with Sandy.  To illustrate, take a look at the 120-hr forecast of sea level pressure from the ECMWF and U.S. GFS models valid at 4 PM PST Friday, Feb. 9.   First, the observed situation  (colors, the winds at 850 hPa; solid lines, isobars, lines of constant pressure): 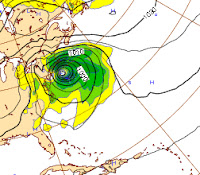 A deep low center right off the coast.  A major snow and wind threat.

And there is the 120 hr ECMWF forecast, clearly showing a major storm. 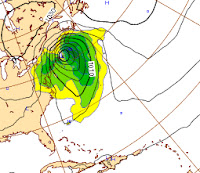 The U.S. GFS model for the same time?  Only predicted a minor trough with little weather (see graphic below).  Not good.  The U.S. model was just as bad at 108 hr out.  Disappointing. 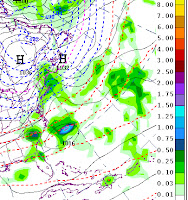 The National Weather Service’s own statistics show that the American model had a substantial drop in skill globally during the critical period in question, with inferior performance (black line) compared to the European Center, the  UKMET office, the Canadian Meteorological Center, and even the U.S. Navy (see figure, closer to one is better). 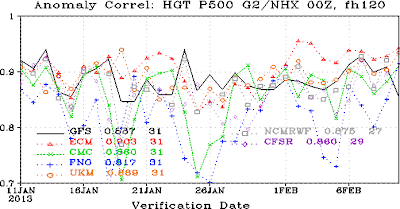 As I have described in my previous blogs (including here and here), much of the inferiority of U.S. global numerical weather prediction can be traced to the third-rate operational computer resources available to the National Weather Service (NWS)’s  Environmental Modeling Center (EMC), an inferiority that can only be characterized as a national embarrassment.   And as I shall document here, the NWS weather prediction computers are not only inferior to those of other national weather services, but also to NOAA’s  computers for weather research and to U.S. climate prediction machines.  Be prepared to be shocked, angry, and disappointed.  And to take action to change this situation.

Let’s begin by comparing the most powerful weather prediction computers used by various countries around the world (see graphic below).  Japan and ECMWF are the leaders with about .8 petaflop machines, followed by England (UKMET), S. Korea, and Canada.   The U.S. is at the bottom of the barrel, with about TEN PERCENT of the capacity of the leaders.

Yes, we are talking about the richest nation in the world, and one of the most vulnerable to severe weather.

What makes this even worse is that the U.S. has such a large area (including Alaska, Hawaii, the U.S. mainland, Puerto Rico and the Virgin Islands).

Got your juices going yet?  You haven’t seen anything!

Let’s compare the computer power availability for operational numerical weather prediction in the NWS to that available to its parent agency, NOAA, for weather research (see graphic).   The NWS operational machine is dwarfed by the NOAA computers that are available for research.  The new NOAA Fairmont machine is five times more powerful, and the NOAA Earth Systems Research Lab/Global Systems Division has TWO far bigger machines.   So operational prediction, which saves lives and promotes the economy of the nation, gets crippled by lack of computer power, while researchers get the big machines.  Folks, some administrators in NOAA are making very bad decisions.  And their bosses in the Department of Commerce are going along with it.

Folks, this is outrageous.   Weather prediction is critical for the U.S. economy and for public safety.  And even if you are worried about climate change, the number one thing one needs to encourage resilience in a changing climate is to have good weather prediction! What is the logic for giving climate research hundreds of times more computer power than weather prediction?  It makes no sense from a rational viewpoint.

A big part of the problem is that NOAA management has decided to put priority on the oceans and climate while they short-change weather prediction.  This has been a deliberate and long-term policy. Unfortunately, the U.S. Congress has not reined them in. The irony is that NOAA understands how important and popular the National Weather Service is and demands that NWS products have NOAA stamped all over it–while draining critical resources the NWS requires to do a proper job.

The time to fix this self-inflicted problem is now.   There is a great deal of money in the Hurricane Sandy relief bill for improving hurricane and storm prediction or storm-related infrastructure  (over 100 million dollars).  Some of this money should be used to fix the NWS computer deficiency (it would take about 50 million dollars).   There is nothing that would more effectively improve hurricane prediction than dealing with the computer gap. We are not talking about increasing NWS computer capacity by 30%: it needs to be increased by 10-100 times to properly serve the nation.  Consider that NOAA is planning on spending 44 million to replace the wings on two hurricane hunter aircraft:  the same money would revolutionize and greatly improve U.S. weather prediction if used on computers.  If the Sandy money is not available, other funds should be found.  Enhanced computers is absolutely core infrastructure for the U.S. and would pay for itself many, many times over.  So many other nations understand this and have committed the necessary financial resources to secure bigger computers for their weather services.

NOAA folks have proven themselves to be unable to deal with this issue, so I recommend you contact your Congressman or Senator to complain.  Only Congress has the clout to fix the situation.  And only by your complaining and making this a major issue, will Congress take it seriously.

Seriously Behind; U.S. Near the Bottom In Weather Forecast Computer Power (Guest post by Cliff Mass)