An intense supercell storm spawned a violent tornado that tore through Joplin Missouri around 5:30 PM Sunday evening. The local paper is reporting 24 fatalities and the main hospital in the city took a direct hit. The hospital is being evacuated and patients transferred to nearby facilities.

A friend of mine who is a storm chaser pulled 30 people from the rubble near the high school which appears to be mostly destroyed.

Here is the radar image of the storm. A bounded weak echo region is clearly visible as the cell passed through Joplin. Another hook echo is clear in a cell to the west, but the deadly tornado tracked through Joplin along I 44. 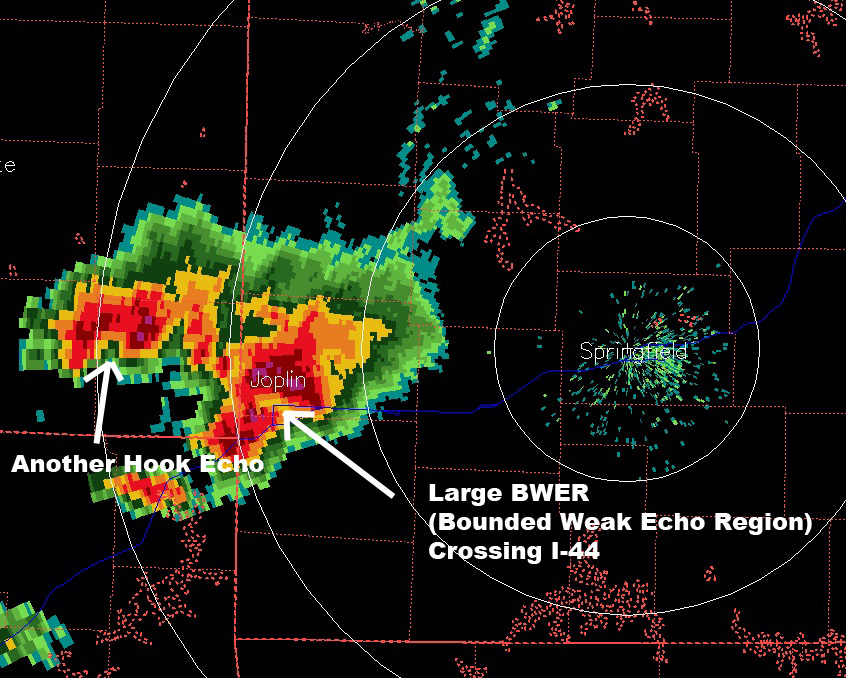 Springfield NEXRAD Base Reflectivity at 2238 GMT Sunday 22 MAY. This is a text book tornado signature.

The BWER is an indication of an intense updraft in a super-cell. Storm relative mean velocity showing 100 knots of shear. Red is wind away from the radar and blue is toward.

From some new pics of the damage, it looks like at least a strong EF 3 or EF 4 tornado. Random events like tornadoes will sometimes happen very close together in time. The fact that this event happened just a few weeks after the April 27th outbreak is just chance. Cities are bigger now and make bigger targets. Other than that, it is just the roll of the dice that two mid size cities (Joplin and Tuscaloosa) were struck by deadly tornadoes.