Would you survive an asteroid hit? Find out here. 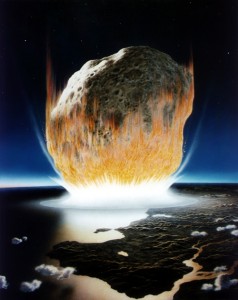 Even a 100 meter wide space rock will cause devastation. Image from NASA.

I’ve often wondered about something. Suppose a 1000 meter wide space rock  were to hit Nashville, TN. Would I survive here in Huntsville in North Alabama?

It would depend on many factors of course. Nashville is about 165 km to my north. That’s a BIG factor.   The size of the asteroid, and the angle of impact, are others.

Let’s say that it hit at a 60 degree angle and was a rather dense mix of rock with some ice. The ground in Nashville is made up of sedimentary rock, so that will also be a factor.

Do I survive? Probably not.

The scenario I am about to give you is based on IMPACT EARTH. It’s a program put together by scientists at Purdue University and Imperial College in London. They have recently updated the physics and you can check it out yourself online here.

So what would I experience at a distance of 165 kilometers?

The rock would begin to break up at about 70 km above the surface. I assumed an initial speed of 25 km /second. It would be slowed only very slightly by our atmosphere and hit the surface traveling 24.7 km/ second. The fragments of the asteroid would hit the ground over a relatively small area. An ellipse of around 1000 meters to 1500 meters.

The crater formed would be 16 km wide! That is over 10 miles for metrically challenged Americans. Click the image to run your own impact calculations.

At the time of impact everything down to 4 km would be vaporized. The vaporized earth and buildings would fill the crater back in and it would only be around 700 meters deep at the end. Downtown Nashville would be gone before anyone there knew it. They might have a couple of seconds warning at most.

The blast in Nashville would produce the same energy as nearly 6,000 15 megaton hydrogen bombs detonated at once.

Let’s assume I’m outside walking the dog in Big Spring Park in the middle of  Huntsville. The flash in the sky as the rock hit the atmosphere would last only 2-4 seconds. It would be silent. No noise. The impact fireball would look 16 times larger than the sun.

If it’s sunny, walk outside and look up at the sun. Close your eyes and feel the warmth. The heat from the blast 165 km away would feel 27 times hotter than that. The heat would be instantaneous. Trees blown down by an impact in Tunguska, Siberia on 30 June 1908. The space rock was probably less than 50 meters across. Image on Wikipedia.

I would suffer third degree burns and trees and grass around me will catch on fire. If I were inside when it hit, the burns would be less severe. Most of the city would still be alive.

It would still be quiet.

As I looked around in pain from the burns, I would see fires everywhere. People would be rushing outside to see what was happening.

33 seconds after the impact, Huntsville would feel an earthquake of magnitude 7.9.  Most well built buildings would not collapse but many people will be injured by falling objects. It would probably knock me off my feet in Big Spring Park.

The fireball in the northern sky would be huge but about 2 minutes later a black cloud would soon be visible. This black cloud would be made of gravel sized rocks and very fine dust. The ejecta cloud arrives in Huntsville 3 minutes after the impact. It’s now very dark with fires burning as the ground shakes.

Hell would rain down for 5 more minutes. It’s not over though. What winds over 300 km/hr (200 mph) will do to a home. This image is from the aftermath of an EF3 tornado in Oklahoma. Courtesy NOAA/NWS

Eight minutes after the impact an explosion so loud it will cause excruciating ear pain will be heard. Almost immediately, a blast of wind will hit the city. Winds will increase briefly to over 90 meters per second. That’s over 200 mph.

Even strong buildings will likely collapse. Anyone outside will literally be blown away. Frame houses that were on fire seconds before will be blown away.

How about those who are further south? The winds in Birmingham would only reach hurricane force. The thermal blast would not cause burns. Heavy damage from the 7.9 magnitude quake would be likely.

Astronomers think that objects like I described hit Earth twice every million years. Objects big enough to destroy a large city hit Earth every 3 centuries on average. The Tunguska event in Siberia in 1908 was one of these.

The rock that wiped out the dinosaurs was 10 km wide. Those type events are thought to happen only once every 300 million years or so.

Just something to think about…

Would you survive an asteroid hit? Find out here.