Recently I published a commentary in Nature Geoscience with the title ‘Drought in the Anthropocene’. In that commentary, my co-authors and I argued that in the current human-dominated world, we cannot study and manage natural drought processes separately from human influences on the water system like water abstraction, dam building, land use change, water management, etc. To fully integrate human processes when studying drought we should change the definition of drought, test new methodologies and include social science. This sounds quite logical, but if you look at the history of drought science, it is not so obvious. In the natural sciences, drought research is a young field compared to research on floods. Floods are of course much more conspicuous, but drought causes more loss of life and economic damage worldwide. Because drought research is such a young field, the basic processes needed to be studied first before complex systems (including humans) could be understood. Additionally, much of the drought research in the last decades has focused on questions related to the effects of climate change, which needed natural case study regions, uninfluenced by people, for an undisturbed climate change signal.

So why do I think it is time for a change now? Well, partly because the drought research field is a more mature field now and because we realize that direct human influences on drought might be significantly bigger than the effects of climate change, but there is a personal story too. That story starts when I started my PhD on the processes underlying drought propagation at Wageningen University (the Netherlands) in 2007. I was going to focus on natural processes and five case study regions were selected in the EU-funded project I was working in. One of those ‘unfortunately’ was not a natural, undisturbed catchment. In the Upper-Guardiana catchment in Spain abstraction for irrigation in the 1980s and 1990s was so massive (see pictures below) that it decreased groundwater levels with 50 meters in some parts of the aquifer and groundwater-dependent rivers dried up (see pictures below). 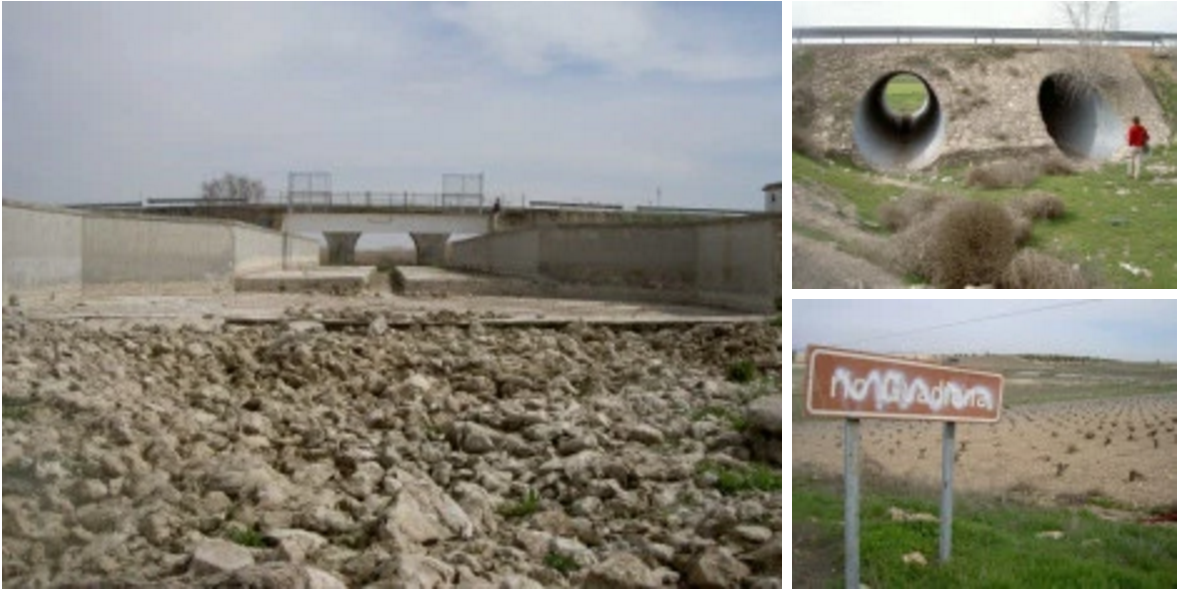 Dried-up rivers in the Guadiana catchment. The name of the river is even crossed out because there has not been any wate rflowing for 20 years. (Photos by Henny Van Lanen)

When the important Ramsar wetland Tablas de Daimiel dried up (see pictures below), this led to a debate between farmers and nature organisations. The nature organisations claimed this disaster to be caused by the agricultural abstractions, whereas the farmers defended themselves by arguing that the wetland dried up because of the severe multi-year drought that Spain was experiencing at the time and that their abstraction was only minimal. Since I was interested in the natural processes related to the development of that drought, I needed to exclude the effect of abstraction. I developed a methodology for that and discovered that the drying up of the wetland was caused by both a lack of precipitation and groundwater abstraction, but that the effect of groundwater abstraction on decreased water levels was, on average, four times as high as the effect of the lack of precipitation. This meant that both the farmers and the nature organisations were right, but the farmers had more influence than they claimed to have. 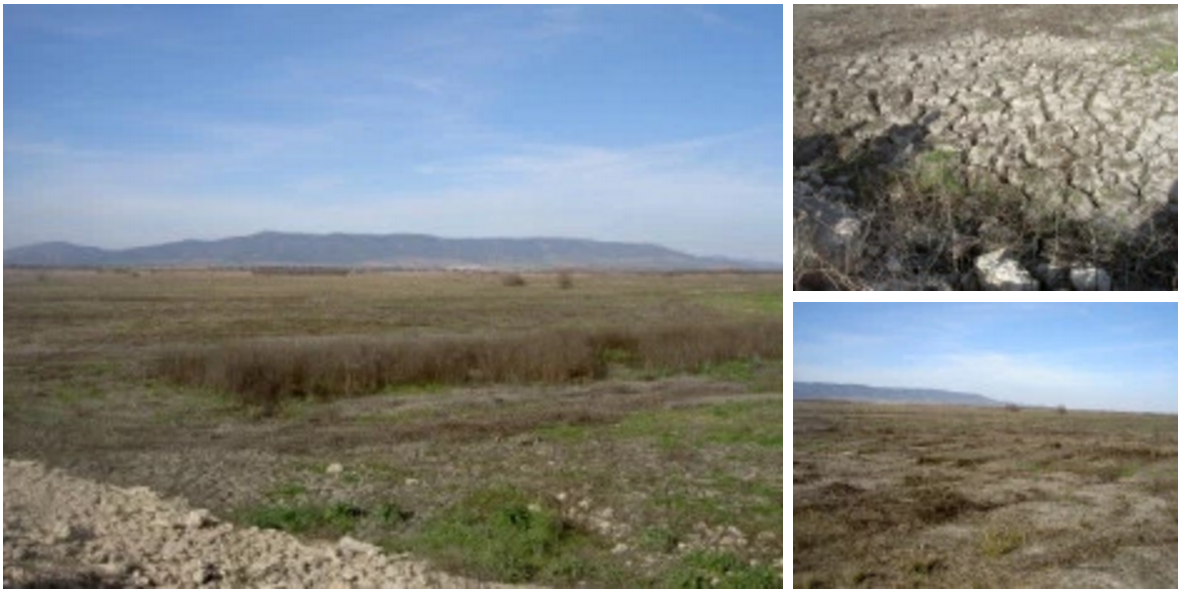 This approach of separating between the human and natural causes of a lack of water solved the problem for my PhD and I could comfortably go back to studying the natural processes of drought in all my case study regions. And I did so successfully, judged by the positive evaluation of my PhD thesis and defence in 2013 (see pictures below). However, something kept bothering me, because I realized that my results were not applicable to most of the world, since there are almost no places left without significant human influence on the water system.  Take the current multi-year drought in California. Politicians, farmers, water managers and the media keep asking the question: “how much rain is needed to end the drought?” This would already be quite a difficult question in a completely natural system, but it is un-answerable in a hugely complex system like California, dominated by human activities like agriculture, water abstraction, water storage in reservoirs, water transfer, and urbanization. How much rain is needed to end the drought is for example highly dependent on how much we abstract. With a simple water balance you can evaluate that the amount of water storage (in for example groundwater or reservoirs) is related to how much water comes in and how much water goes out. If we take out more, we also need more input to recover from a drought in storage. So, if the farmers in California keep on abstracting huge amounts of groundwater, the system will take much longer to recover. We as natural scientists cannot answer questions about the recovery of drought in these kind of human-dominated systems if we do not take into account human activities in our calculations. To be able to do that we need to adapt our methodologies. We could for example use the tools I used to get rid of human aspects of drought in my Guadiana case study, to instead focus on the effect of abstractions.

But it is not all bad. We can also have a positive influence on drought. Last year (already moved on to a Lecturer post at the University of Birmingham, UK), I visited Santiago de Chile for a project workshop. Santiago is a very big city (see pictures below). For its water supply the city is dependent on snow and reservoirs in the mountains. Decreasing snow accumulation related to climate change lead to worries about future water resources. One of the solutions the Chileans are investigating is artificial aquifer recharge projects, in which surface water during high-flow periods is led to infiltration ponds and allowed to recharge the underlying aquifer (see picture below). In times of low water availability in the mountains this groundwater can be used as alternative source of water.

The city of Santiage de Chile and their Artificial Aquifer Recharge project.

Also in Upper-Guadiana, people have found a solution to the problem. Measures are in place to reduce groundwater abstraction for irrigation. However, these take a long time to implement and to have an effect on groundwater levels and the wetland. Until that time, a temporary solution saves the important wetland from drying out completely. Groundwater is pumped up to keep the Tablas de Daimiel wetland wet (see pictures below). Hopefully this is a bridge to a more sustainable solution that results in a full recovery of the aquifer and the wetland.

These positive influences of humans, alleviating drought conditions, should also be included in our drought research, because then we can investigate the effectiveness of certain measures to reduce the impacts of drought. Responses to drought, such as water use restrictions, can lead to feedbacks between the natural and social systems that are very complex, but also very interesting and crucial to understand if we want to solve our drought problems. That is why I wrote the Nature Geoscience about such an obvious topic ‘Drought in the Anthropocene’. I am ready to work on more complex drought processes (see pictures below) and I encourage my colleagues to do the same so that our results are useful where they are most needed.

Me looking towards a bright future … (Photos by Henny Van Lanen)

Read the paper ‘Drought in the Anthropocene’ here: http://www.nature.com/ngeo/journal/v9/n2/full/ngeo2646.html

~ A repost from the TravellingGeologist blog ~

Posted in: Groundwater, Research No Comments/Trackbacks »