The Los Angeles Times in October went on a bit of a crusade against lagging earthquake preparations in their quake-threatened home town. They have published a series of exposés investigating the lack of public awareness and the governmental inaction regarding building safety in the aging metropolis of L.A. “Concrete Risks” is indeed an illuminating piece, publicizing the fairly alarming prevalence of dangerous, quake-prone construction throughout a city that’s doomed to be shaken. It’s also a nice example of geographic data visualization in a news”paper”, with a decent interactive map that highlights the worst offenders. The Times’ substantial effort in this investigation paid off, as before the week was over they celebrated the action they had spurred in the L.A. Mayor’s Office: he appointed an “Earthquake Czar” for the city, and a City Councilman was pushing for formal inventories of the building stock. The L.A. Times’ map of non-ductile concrete buildings. Of course… they’re where the most people are. Click to go to the interactive version.

The Times thrived on the drama they had unleashed, reporting shortly thereafter on a group of engineering researchers who were withholding their database of construction types in the city. The researchers’ trepidation stemmed from a fear of liability and retaliation (euphemistically termed “legal and ethical constraints“)… from property and business owners who might suffer economically from revelations that their buildings are outdated and dangerous. It’s profoundly illuminating to see a community more worried about vengeful litigation than about human safety and long-term resilience.

As the exposé and editorials pointed out, modern earthquake retrofitting is a socially and economically overwhelming endeavor. The Earthquake Czar has an extreme challenge ahead of her: balancing the economic/mortal risk to the city that seismically unfit buildings represent with the denial and resistance of a populace to whom earthquakes appear a distant threat. Coming up with solutions in the first place is a far larger obstacle than the Times’ accusative reporting would have a freshly outraged populous believe. Retrofitting involves financial investment that most cities are currently unable to bear, most building owners are unwilling to foot, and most building occupants are at best luke-warm about, especially when considering the prospect of financing these upgrades through tax hikes or–the ultimate doom–rent increases. (On the other hand, some especially concerned and proactive cities turn this around with tax incentives for earthquake retrofits.) Nonetheless, renters, owners, and municipalities tend to resist the expenses of retrofitting.

This resistance is most pronounced in the “peace-time” between major earthquakes. We’re rapidly approaching 20 years since Los Angeles suffered a truly disastrous earthquake, and that’s plenty long for the threat to fade from public consciousness. As a people we’re best at addressing threats when they’re fresh in our heads: after each of the 20th century’s major U.S. quakes, cities and states put in place ever-stricter building codes that built upon the lessons of the most recent temblor. People were willing to invest in these upgrades with images of death and destruction fresh in their minds. But we’ve slowed again because the collective perception of earthquake risk has dulled, and sights easily reset to near-term costs, not remote financial catastrophes. 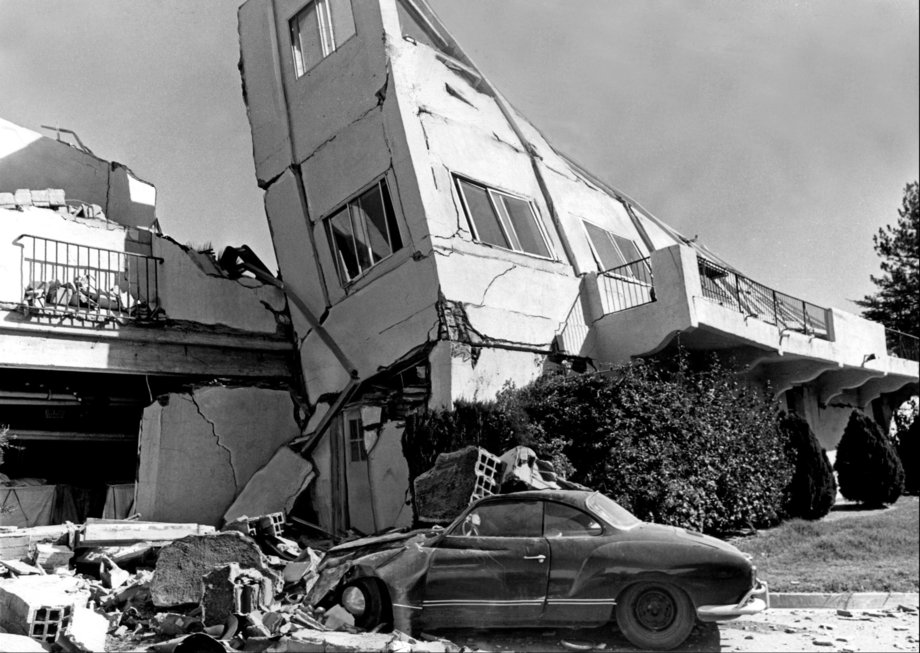 but nobody wants this to happen, right? L.A. County VA Hospital after ’71 quake

This balance between short-sighted economical interests and long-range risk mitigation is an issue that we’re lucky enough to face as a society. We have learned enough to make meaningful changes, but we have to decide whether we as a community value such improvements, and what degree of loss we’re willing to insure with pre-disaster investments. Proactive (or perhaps understandably fearful) cities like San Francisco have already taken bold steps towards pressuring the populace into better earthquake preparedness, but it will clearly be a long, slow push. In September, 2013, an elaborate and comprehensive mandatory retrofit ordinance took effect for San Francisco’s “soft-story” buildings, like those that failed lethally in both the 1989 and 1994 earthquakes.

These measures are undeniably good for public well-being and earthquake resilience, but they are indeed difficult for building owners. A perusal of the advice pages reveals the vast extent of economic and urban planning considerations necessary to mobilize such change. It’s a clear statement of intent by the city to confront this painful problem head-on, before it’s rendered moot by the inevitable seismic calamity. It’s really a great help to have the investigative and awareness-raising power of major regional media on the side of quake-savvy advancement. It’s also a great fortune not to be squandered living in a developed nation with the luxury of resources to substantially address this problem, which is far down the list of threats in many corners of the globe. Hopefully L.A. can be as community-minded and proactive as its northern rival city has proven.