(Note: I don’t use any footnotes or attributions here; this material is easily found online at various sources that have borrowed from one another so many times it’s hard to tell who said what first. I try to offer a general synthesis of some major concepts and events, and the reader is encouraged to search for these terms and check out the various presentations of transcribed primary documents.)

The topographic features of the Powell Valley Anticline (PVA) played a significant role in the lives of both indigenous and Euro-American peoples on the American frontier in the late 18th century. Because of its location, length, and impact on the layout of Appalachian river systems, the PVA facilitated both western travel for Euro-Americans and strategic movement of indigenous peoples seeking to stop this westward expansion. Here I focus on two subjects inextricably connected to PVA topography: The Wilderness Road and Robert Benge, also known as Chief Benge, Captain Benge, Bob Benge, or simply “The Bench.” Benge and Wilderness Road users had two very opposite goals, leading to numerous clashes and Benge’s ultimate demise in the mountains of the PVA.

For all of this to make sense, it’s necessary to look at the physical extent of the PVA (transparent red shape below) in southwest Virginia and Tennessee along with the boundaries of the Pine Mountain Thrust Sheet (red dotted lines), of which the PVA is part. Dots are modern day cities: (lower left to upper right) Chattanooga, TN; Knoxville, TN; Asheville, NC; Roanoke, VA. The Powell Valley Anticline (PVA), covered in the red shape, is part of the Pine Mountain Thrust Sheet, outlined in dashed red. Because these structures are quite large and involve very erosion-resistant Pennsylvanian-aged sandstones, they strongly influence topography and the layout of river systems. Several river systems, all of which take very different courses to their respective mouths, fan out from the edges of the PVA and Pine Mountain Thrust Sheet. In early America, river valleys were frequently used as routes of travel, making the PVA a large-scale “intersection” where travelers using the topography of one river system could cross dividing ridges and access another system heading in an entirely different direction. The Cumberland Gap on the Wilderness Road is a prime example, as it allowed travelers to pass from the Powell River (dark blue river in the heart of the PVA) valley into the Cumberland River (brown) system and then, if desired, into the north-flowing Kentucky River system.

The “intersection” concept becomes important when the groups of people using various travel paths are considered. Westward-moving Euro-American settlers used the purple routes shown below, while southern Native American groups had long used a variety of routes following the upper Tennessee River prongs, shown in red, for war and trade. Not surprisingly, things got interesting where the two routes overlapped within and immediately southeast of the PVA. Conflict was especially common in the 1790s when a group of Cherokees from south and east of present-day Chattanooga, Tennessee undertook a guerilla campaign against westward expansion of Euro-American interests. Lower Cherokee travel and raiding (red) overlapped with Euro-American expansion (purple) around the PVA. The southern prong of the purple travel route starts in Morganton, NC, follows the Yadkin River to its Blue Ridge headwaters, then follows the Watauga River to the Holston at Kingsport, Tennessee, where it meets the northern prong of purple. The northern purle prong begins at Fort Chiswell, Virginia, and passes from the New River basin into the Holston. The three main prongs of the red travel route are (southeast to northwest) Holston River, Clinch River, and Powell River.

The complicated topography of the PVA provided a good place for Cherokee forces (and sometimes Shawnee) to stage attacks and escape through the connected valley networks and numerous gaps in the mountain ridges. Cherokee war captain Robert Benge was particularly fond of using the PVA to access and escape after raids, and the gaps marked on the image below were all well-known to him and those he attacked in the 1780s and 1790s. They are called by name in first-hand accounts of his raids and abductions, and the old map below also takes care to note most of these features. Despite being produced in 1859, well after the area was thoroughly explored and settled, the old map still struggled to capture the layout of complicated ridge patterns within the PVA. This complex topography was used by Benge to great advantage until 1794, when it was ironically used against him and led to his demise… The PVA looks like a finger about to tap someone on the shoulder. The black dashed line is the Wilderness Road, connecting Fort Chiswell, Virginia and Kingsport, Tennessee to Cumberland Gap and Kentucky. 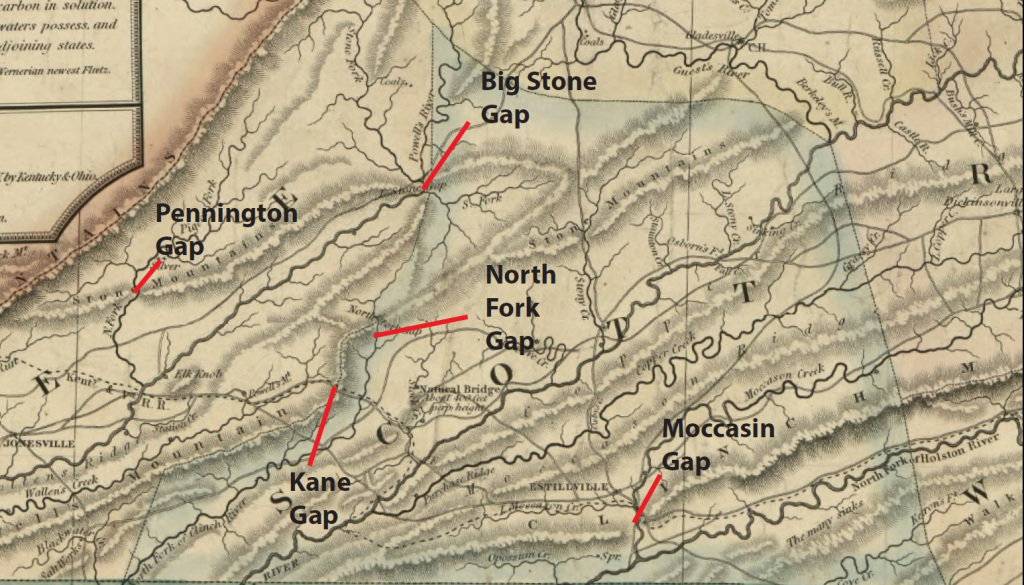 This 1859 map captures the general shape of PVA topography, but the intricately curved ridges are not perfectly reproduced. Place names used here date from the 1700s. A link to this map is found at the end of the post.

Benge was only half Cherokee. His father was a trader of Irish descent, but Benge lived in the world of his Cherokee mother, who was of a prominent lineage. A simple Google search of Benge’s name is highly recommended, as it will provide a wealth of information about his life, and the reader will find that most accounts borrow heavily from each other. I won’t go deeper into his biography, but suffice it to say that he was obviously capable and rowdy enough to still be talked about in 2019. Despite being based out of the general area of Chattanooga, he and his band were exceedingly well-traveled, not hesitating to go as far as the Ohio River. He raided heavily along the Holston River in Virginia southeast of the PVA, but was well-known throughout the entire region. He engaged in plenty of mischief in and around the PVA, which provided a useful avenue of travel back towards the Tennessee-Georgia border area. I wish to present three of his PVA-related exploits below, all of which involve the use of topographic features that are expressions of PVA structural geology.

Why do gaps form in ridges? The simple answer is that a gap develops where the rock that supports the mountain ridge is easier to erode. Greater ease of erosion may result from the rock being broken and weakened by faulting. It may also result from localized differences in sedimentary layer thicknesses or patterns. Gaps occurring within plunging (tilted) fold sets form where weak layers crop out between harder rocks above and below in the sedimentary sequence. Some examples are shown below.

Cumberland Gap and the Pine Mountain Narrows have developed where a minor fault cuts from the PVA across the Middlesboro syncline to the Pine Mountain Fault. Two small ridges, oriented “north-south) in the image below between the Narrows and Cumberland Gap, reflect movement and deformation on this fault. The major ridges are not significantly offset by this fault, but it obviously weakens the rock sufficiently to localize erosion and form gaps. The role of minor faulting in the formation of Cumberland Gap and the Pine Mountain Narrows is reflected in the two small ridges running north-south. Note the large, round Middlesboro Impact Structure just west of Cumberland Gap. Its age is unknown.

Moccasin Gap, southeast of the PVA, is another example of a gap formed on a minor fault oriented nearly perpendicular to the ridge. The offset on the fault is minimal; in the top image below, the gap in the ridge is obvious, but the two ridge segments do not appear offset. The geologic map overlay shows the results of field mapping of the location. The ridge segment on the right is offset towards the observer a few hundred feet, providing a natural weak point to localize erosion. Moccasin Gap has developed on a very minor fault that breaks the ridge-forming section sufficiently to promote localized erosion. At the center of the bottom image, the purple and pink layers are offset from the their continuation on the left ridge segment. US 58 uses this gap today.

North Fork Gap on the southeast edge of the PVA has formed due to erosion of a tilted sedimentary section. The LiDAR hillshade below shows development of the gap in weak Devonian shales between strong, ridge forming Silurian and Mississippian sandstones. Tilt of layering is down to the right in this image.

Library of Congress 1859 map of Virginia: