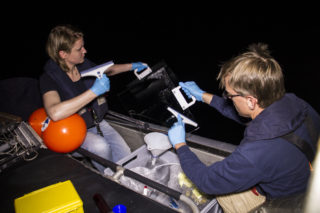 At 7:30am, the Sun will barely have started its slow ascent. Maybe that is why waking up at 4:30am to prepare the instruments to go aboard Falkor’s work boat, Atreyu, feels like a giant test of Janina Rahlff’s commitment to her research. She is not the only one involved of course, Chief Scientist Oliver Wurl and two sailors are part of the mission.

It is 4:40am when Atreyu, manned by Lead Deckhand Wendel Virrey and Deckhand Luke MacNutt, is lowered into the calm waters of the Timor Sea. They swiftly pick up the scientists and head out to collect microlayer samples. Janina and Oliver insert clean glass plates into the water, allowing the oily microlayer film to stick to the crystal. They then let it drip into a container with the help of a squeegee. This laborious operation takes over an hour and a half.

Eight days have gone by on this expedition, and ever-present Trichodesmium blooms are most likely the reason why the experts have been spotting plenty of marine life. Today is no exception as blowhole sounds alert the team. Today the bottlenose dolphins don’t seem to find Janina’s work too interesting and after a few peeks they quietly disappear; but for her, this brief visit makes her early start worthwhile.

By the time timid colors begin to spread through the sky, Atreyu must go back to Falkor to take Bill Landing and Rachel Shelley away from the metallic influence of the vessel so they can collect their daily samples from the kayak (recently christened Morla). Meanwhile, Janina and Oliver fill glass tubes with the recently extracted water and place them in an incubator that will drift with the current, gamely pursued by Falkor, for the next ten hours.

Janina wonders if she will have time to nap at some point during the day. Once onboard she hurries up and enjoys a quick breakfast, only to continue calibrating the delicate instruments she is working with in the Wet Lab.

Hand-made glass needles filled with microsensors enable her to conduct non-destructive and real time measurements of the elusive microlayer. She measures the chemical environments of microlayer samples at a scale of a few micrometers (1,000,000th of a meter). This means that minute changes in the chemical gradient can be detected, which allows for the study of this complex and heterogeneous environment in extreme detail. The challenge is that these hand-made needles are shockingly fragile and extremely expensive, which is why Janina has to operate with care, even the subtle rolling of Falkor could cost her.

Earlier in the morning, samples were placed at three different depths in the incubator. Now that it is back onboard, Janina will measure oxygen in the sea surface microlayer to understand how its communities behave at each depth. This way she will learn more about the complex microbial inner workings of the microlayer under diverse conditions. She conducts her experiments and measurements in Falkor’s Wet Lab from 8pm until 1am the next morning.

Janina loves science, and accepts the sacrifices it takes to get to the knowledge. “I want to understand the planktonic communities and observe them in their natural environment,” she shares. That is what keeps her going into the wee hours of the morning.