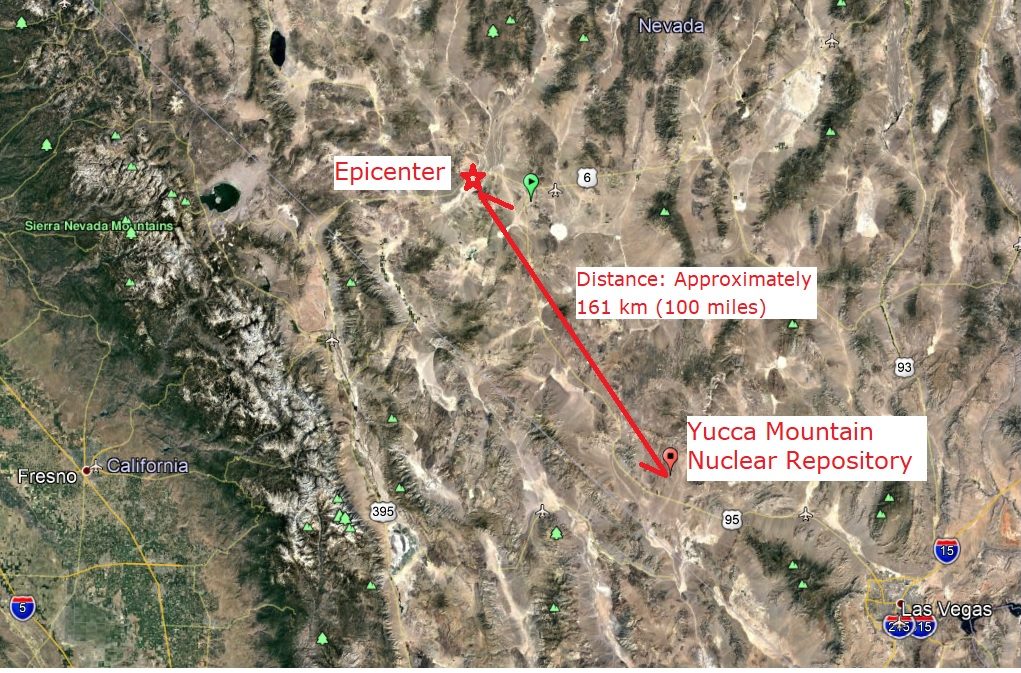 Approximate location of 2020 May 15 magnitude 6.5 Earthquake in western Nevada. Google Earth base aerial.

On Friday, May 15, 2020, a magnitude 6.5 earthquake rocked Nevada and portions of California. With the epicenter located about 22 miles west of Tonopah, NV, no serious damage was recorded aside from cracked highway pavement in the mostly remote surroundings, far from population centers. Reportedly, Nevada has not seen an earthquake of this size since 1954. Worth noting, the earthquake epicenter is about 100 miles away from the Yucca Mountain Nuclear Waste Repository, as depicted on the above aerial image. The Yucca Mountain Nuclear Repository is, by authority of legislation passed in 1982 and 1987, currently the designated single facility for permanent disposal of high level nuclear waste. A time-line of the related events briefly describes the story of the Yucca Mountain Repository. Locals see the project as a source of jobs but state-wide there is strong opposition. After all, there are no nuclear power generating facilities in Nevada. According to Rep. Ruben Kihuen (D-Nev), “if you generate nuclear waste, you should keep it in your own backyard. Don’t send it to our backyard.”

The safety of Yucca Mountain has been debated for nearly forty years. I’ve previously posted on the topic here and here. An interesting analysis of political and other factors swirling around the project is “How Safe is Yucca Mountain?”

As the map to the right (USGS craton map) shows, the Yucca Mountain site is not in an ideal location in terms of tectonic activity. Located near the boundary of the “accretionary belt” and the “deformed craton” the region has a history of volcanic activity within the past 2 million years and Nevada is ranked third in the nation for earthquakes. As Dr. Cochran points out in his paper cited above, Nevada was selected largely for political reasons. The federal government already owned the Nevada Test Site property, which had been used for years for weapons testing. It is remote, however, remote areas of the United States are often found out west where there is higher seismicity. Whether we want to or not, we as a nation will have to figure out a solution to permanent nuclear waste disposal with some 90,000 tons now in temporary storage.

So where should it go? North or South Dakota? Eastern Montana? Predicting the long-term future of seismic events appears to be dicey. As Nevada Seismological Laboratory Director Graham Kent puts it “We like to think everything’s the way it is and it doesn’t change that much,” he said. “I think the last few months we’ve learned with the pandemic that that’s not the case.”