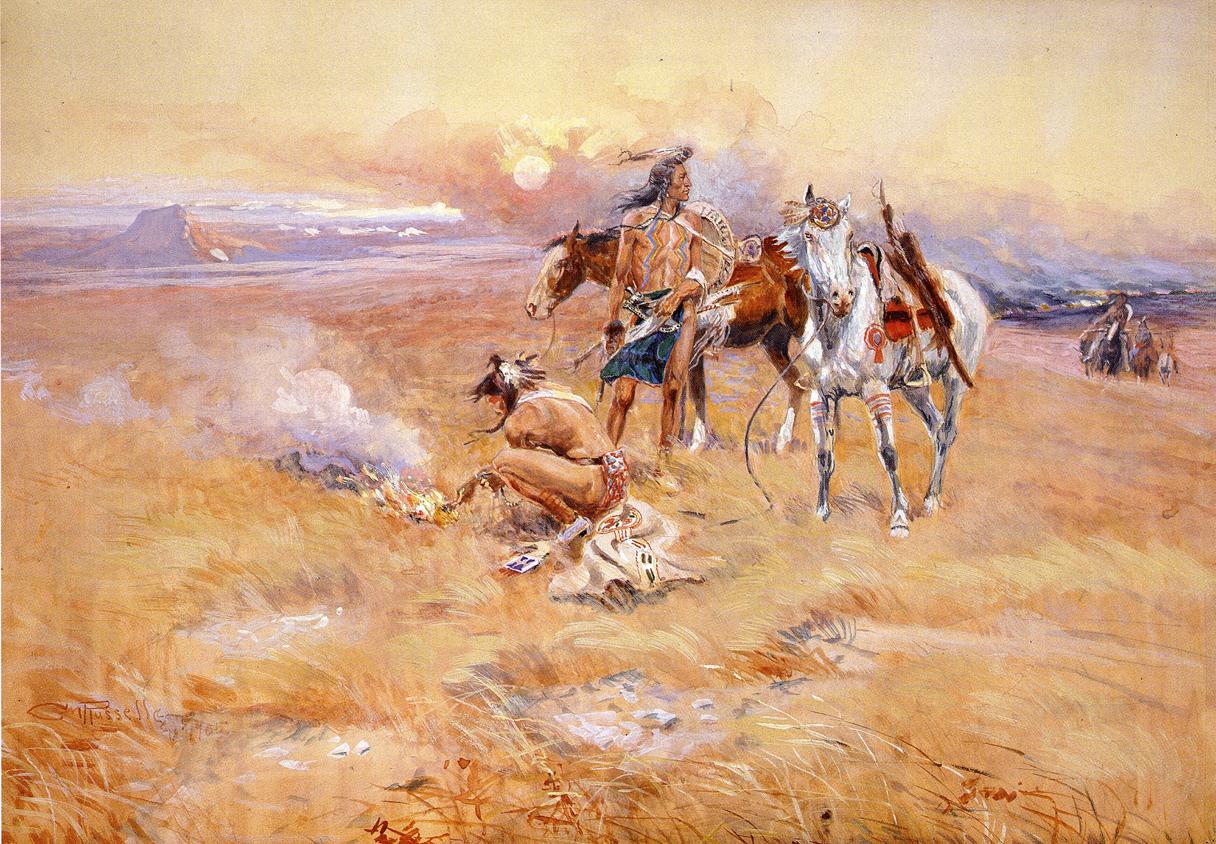 Images of modern prairie burns near Council Bluffs, Kansas have been captured by venerable National Geographic photojournalist Jim Richardson. These fires aimed at maintaining prairie grassland ecology carry on a Native American practice that goes back centuries. The University of Nebraska-Lincoln hosts an online archive of The Journals of the Lewis and Clark Expedition in which George Clark, who probably never won a spelling bee, recorded this remarkable river scene following release of an ice jam near Fort Mandan (present-day North Dakota)

The obstickle broke away above & the ice came dow in great quantites the river rose 13 inches the last 24 hours I observed extrodanary dexterity of the Indians in jumping from one Cake of ice to another, for the purpose of Catching the buffalow as they float down maney of the Cakes of ice which they pass over are not two feet Square. The Plains are on fire in view of the fort on both Sides of the River, it is Said to be common for the Indians to burn the Plains near their villages every Spring for the benifit of ther horse, and to induce the Buffalow to come near to them.”

The fire management plan carried out by the Native Americans was clearly intended to support a “movable feast” as peoples and large game herbivores, especially bison, migrated over the Great Plains in response to conflict, drought, extreme cold and other adverse conditions.

Though most of the area is currently under agricultural use, the unique aspects of what remains of the grasslands of Central North America are threatened by encroachment of less palatable woody plants (trees and shrubs) when fire and herbivory are excluded. Although fire may be highly effective at preventing woody seedling recruitment, it turns out some shrubs and trees have found a “work around” that enable them to spread their branches in the prairie sun.

Stable Isotope Fractionation in Grass vs. Shrub Water Use Compartments
Reading the article, I was somewhat surprised that the dogwood shrubs could send roots deeper than prairie grasses, which are “famous” for being deep-rooted. To support the claim, however, the research team used stable isotope analysis to compare water uptake in grasses vs. shrubs. They found that the dogwood were accessing deeper soil moisture as evidenced by higher oxygen-18 concentrations in water extracted from shrub leaves, compared to grasses.

Implications for Watershed Hydrology
As these shrubs extend their range in prairie grasslands and utilize deeper soil moisture, to what extent will they alter current patterns of watershed hydrology? It seems reasonable to expect some changes in streamflow, particularly reductions in base flow, and further significant feedbacks.

Posted in: Bioregionalism, Hydrology, Research, Soil's Role in the Environment No Comments/Trackbacks »