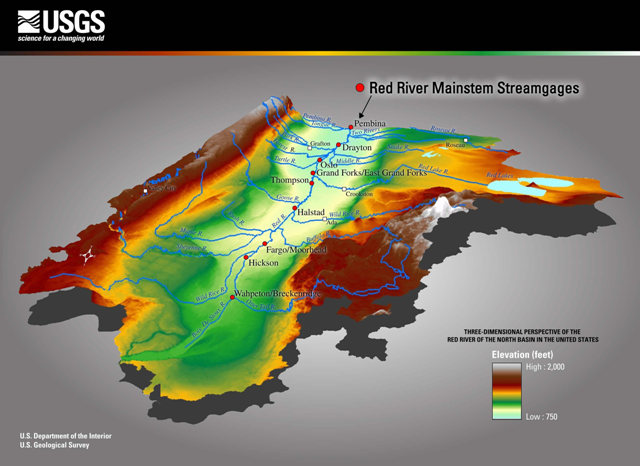 For the second year in a row, soils, geomorphology, and snowpack set up a major flood risk.

The Red River of the North has “issues” that tend to make life “interesting” for those who live near it and depend on it. The Red is a fairly small river in a large watershed. The Red River Valley is not really a river valley at all, but a broad, flat lake bottom formed by Glacial Lake Agassiz.

The fertile soils of the Red River Valley developed from clayey (smectitic) glacial drift largely derived from the Pierre Shale. These sediments, known as the Sherack Formation, are parent materials for the widespread Fargo silty clay (Fine, smectitic, frigid Typic Epiaquerts). These soils are poorly drained and the high-activity smectite clay shrinks and swells as it wets and dries. The force of the expanding clay soil has no problem cracking basement walls. Excavating around foundations, straightening and bracing basement walls is a good business in Fargo-Moorhead. If you want to sell a house, get ready for a building inspector to tell you to fix your foundation.

Because the Red River flows north, it tends to thaw first at the south end and ice-jam at the north end, causing water to back up at the south end of the valley. Post-glacial isostatic uplift is greater at the north end of the valley, where the glacial ice was thicker, so the valley is gradually tipping north to south, from Pembina toward Wahpeton. As the estimable North Dakota State Geologist John Bluemle writes

Because the amount of uplift was so much greater at Pembina than it was in the south at Wahpeton, the gradient of the Red River has decreased markedly since its route became established. Since Lake Agassiz drained from North Dakota about 9,000 years ago, the Red River has meandered over an increasingly broad floodplain. Flooding is a recurring problem along portions of the Red River.

So, because the diminished river gradient caused by isostatic rebound tends to back water up at the south end of the valley, and ice jams up north partially block river flow, and the clay-rich soils plowed and left bare over the winter let snow melt run off like soup on a plate, Fargo-Moorhead gets ready for another flood.

And the flooded fat clays in the soil will crack more foundations, and the basement walls will crack and leak, and the wall-jacking contractors will have work again next summer.

Summers are real nice out there.

Posted in: Agriculture, Pedology, Soil's Role in the Environment No Comments/Trackbacks »