Happy St. Patrick’s Day, readers! If you’re dealing with five or more inches of snow today, as we are in the home of AGU headquarters (Washington, D.C.), then these science-themed limericks will be a great way to distract you from your cursing of the heavens and will get you back into the proper spirit of the holiday. Enjoy! Those lovely forams of New Jersey
report the sea’s rise with no mercy.
They say, “Let us disclose,
from our shell ratios:
that the rise rate now is noteworthy!”
– Don Barber, revised after original by Julie M. Griffin, both of Bryn Mawr College. Image by Don Barber. 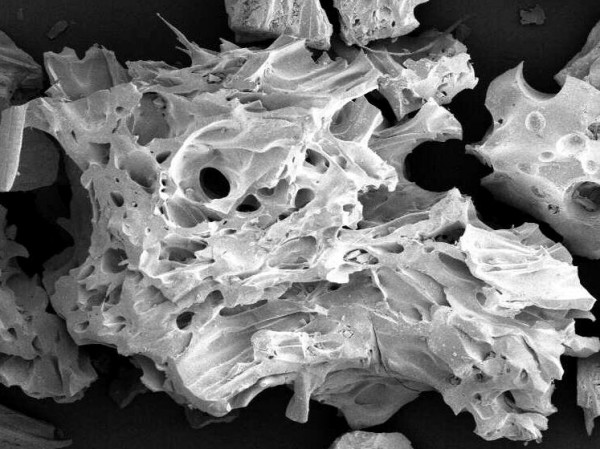 Magma explodes because it has gas
(dissolved as just 5 percent of the mass).
The start of your troubles
is when it turns into bubbles
because the whole lot expands rather fast.
– John Stevenson (@volcan01010), volcanologist at Edinburgh University. SEM image of an ash grain from an explosive subglacial rhyolite eruption in Iceland (John Stevenson). The rock that’s now known as eclogite
was once pushed down a hole that was so tight
down there it was warm
and new minerals did form
that are hard, pretty, large and dayglow bright
– Simon Wellings (@metageologist). Image by flickr user Ian Stimpson (shared under Creative Commons license). I followed the arcus pulvia just to find the pot of aurum.
Twas guarded by one o’ the wee folk, so impish you’d all adore him.
I lunged for the prize and gold dust did fly
The elf had no dustbuster and he said when I asked why
“Just like nature, I abhor ’em”.
– John Glade (Hollywood, Florida). Image courtesy of John Glade. Peloids are an important key,
To building carbonate debris.
But here’s the scoop,
They’re really just poop,
That shrimp have left in the sea.
– Chloe Mills, recent geology Master’s graduate from BYU. Image by Tanner Mills.

And finally, two naked (that is to say, image-less!) limericks:

There once was a lass who was enamored with geology
Her loves included seismology, hydrology, and rheology
When asked why
she eagerly replied
That’s coz I don’t particularly care for physics or biology

– By Pranoti Asher, Manager of Education and Public Outreach at AGU

The Antarctic abyss it grows warm,
but it’s not for the lack of a storm.
The snow is yet pelting,
and ice sheets are melting:
Big polynyas, they no longer form.

– A single-paper limerick by Greg Johnson of IPCC haiku fame.

If you didn’t have a chance to submit a limerick to us but you now feel inspired, consider writing one in the comments section below.