How about I take this opportunity to catch on Reporting My Books?

These are some not-necessarily geology-relevant, but also maybe pretty interesting books that I’ve read lately. All are fiction. 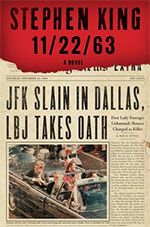 I started reading this time-travel novel by Stephen King last month when a significant trove (though not everything) of files from the government’s accounting of the Kennedy Assassination was declassified and released to the public. King’s novel involves a high school teacher using a peculiar wormhole through time to go back to the late 1950s and then wait around, preparing to save President Kennedy from being shot by Lee Harvey Oswald (after seeking to verify that Oswald acted alone). Along the way he saves a few more lives, gets into a few scrapes, and falls in love. The strongest part of the story is the love story – I found it very affecting and authentic. The time travel bit is a familiar trope in American fiction at this point, of course, but this iteration had a few interesting new angles, which I won’t reveal for fear of spoiling the story. I haven’t read any Stephen King since I was in high school or maybe college, but I was delighted to re-discover what a good writer he is. The guy knows how to tell a story. It’s good. Long, but good. I’m watching the Hulu mini-series based on the book now, too. Artemis is the first novel that Andy Weir has published since his blockbuster The Martian, which was brilliant and endearing in its unabashed love of physics, chemistry, and engineering. The Martian made data collection cool: it was a quantitative MacGyver on Mars. The new novel had whiffs of the same nerdy brilliance, but has a very different overall feel to it. The namesake Artemis is a city on the Moon in the near future, occupied by a few thousand people and visited by a great many tourists. The protagonist, Jazz, is a woman who has grown up in Artemis, and learned to make a living as a smuggler. She’s socially rebellious, fragile and yet tough, and extremely profane in her language. Jazz gets involved in a business maneuver that requires an act of industrial sabotage. The sabotage goes awry, and Jazz is soon fighting for her life, and the life of everyone in Artemis, by trying to outsmart bad guys, good guys, and those tricky laws of physics that make living on the Moon pretty dicey. While The Martian had such a clear and noble goal – save this abandoned astronaut – Artemis feels morally murkier – Make money by breaking other people’s stuff. Even if those other people are the Brazilian mob, it doesn’t feel as compelling a drive to power the novel’s drama. That said, it keeps moving, and there’s no dull stretches or downtime. It will hold your attention. The Golden Ocean and The Unknown Shore, by Patrick O’Brian

I’m a huge fan of Patrick O’Brian’s fiction, in particular the superlative, awesome, rich sequence of 20+ books in the Aubrey/Maturin series, starting with Master and Commander. I recently discovered two early books by O’Brian in a similar vein, set in the British Navy in the years immediately proceeding the Napoleonic Wars, and featuring the stories of groups of sailors on two separate ships in the same squadron. In The Golden Ocean, we follow the travails of Peter and Sean, two Irishmen who set sail on a British ship with the intent of harassing Spanish shipping in the Pacific. In The Unknown Shore, the protagonists are Jack and Tobias, a naval officer and a surgeon’s mate, on a different ship in the same expedition. The two ships are separated by foul weather, and Jack and Tobias are soon shipwrecked and struggling for their lives against the harsh elements of coastal western South America. The second novel is far preferable, I think because Jack and Toby are such opposites in character, and the dynamic between them works to generate terrific conversation and social tension (Tobias doesn’t care at all for manners or social niceties, and is interested only in science and natural history). As such, these two are clear precursors — rough drafts, if you will — for the characters of Jack Aubrey and Stephen Maturin in the O’Brian’s opus. So it’s also fun to read if you want to see wisps of those epic, durable characters forming in O’Brian’s imagination before Master and Commander was ever written.