A virtual field trip to the Grind of the Navir

One of the coolest places I visited last summer in Shetland was also one I’d never heard of, the Grind o‘ da Navir, or Grind of the Navir, which translates to “The Gateway of the Borer.” It’s north of Eshaness, on the northwest coast of Mainland.

Perched high up a cliff with a “ramp”-like snout projecting into the Atlantic, the Grind of the Navir is an amphitheater-like flat area that’s been gouged out by storm waves that enter through a prominent slot-like “gate.” The gate is flanked by two prominent highpoints, the “gateposts” or “bastions.” During storms, waves roar between them, scouring the rock, a rosy pink Devonian ignimbrite, knocking out slabs along joints and the bedding plane. The resulting boulders, liberated from the bedrock, pile up at the back of the amphitheater. The pile represents a sedimentary deposit from the waves, and hence it is a “beach” in the strictest sense, but unlike any beach you’ve seen, considering it’s made of nothing but huge blocky boulders, and they are perched 15 meters above sea level!

Here’s a cartoon sketch of the set-up: And here’s what it looks like when you visit…

Inside the “Ampitheater,” looking toward the “Gate”: Fresh (pink/lavender) ignimbrite, and weathered (black) ignimbrite; this lets you figure out where boulders were most recently extracted: A slab of ignimbrite, show eutaxitic lenses and other chunky ingredients: Geotours Shetland guide Allen Fraser atop one of the “gateposts,” the South Bastion: 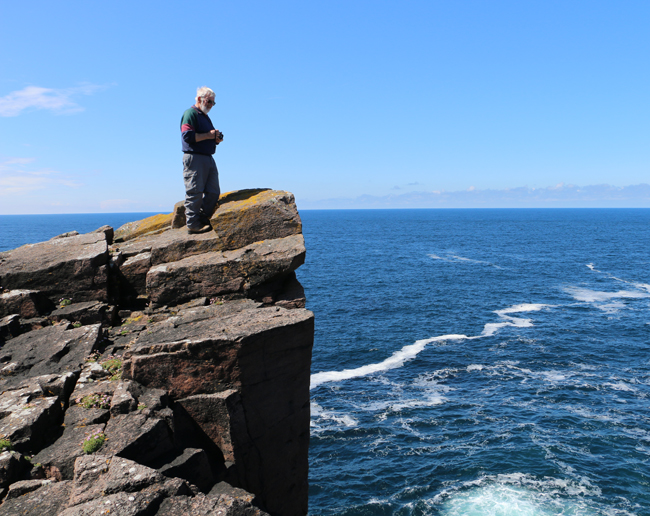 Hall, et al. (2008) published a fascinating study of the Grind, including this series of maps showing boulder movements over more than a century of time. I’ve color-coded it to show “sockets” (fresh pink semi-cubes where blocks of ignimbrite have been liberated) as green dots and moved boulders as red dots: 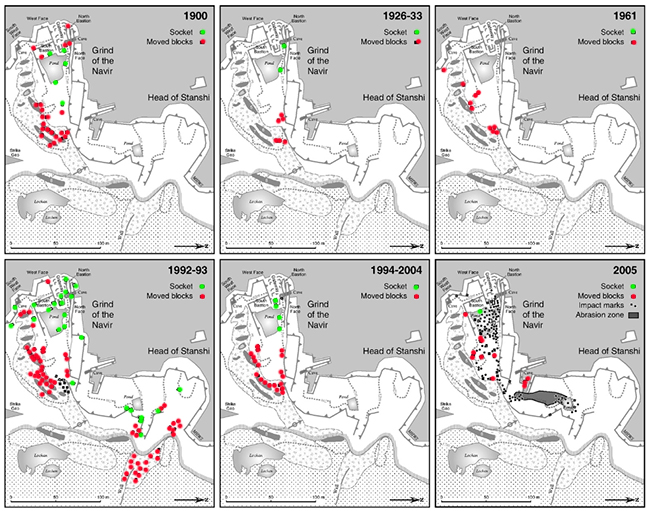 Those dots show: This is a dynamic place!
See some other photos and some video of the storms at this website.

I made six GigaPans and three 360° spherical photos at the Grind. We’re trying out a new system for embedding them in these blog posts, without the use of Flash. But ironically, they don’t load up well for me, though hitting the “circle arrow” refresh icon seems to force them to load. I’ve included both Non-flash and Flash versions here. Hopefully one will work for you! Explore them (zoom in, go up/down, left/right) here:

A view of the Grind from the grassy marine terrace of the main part of the island:
Link 1.36 Gpx GigaPan by Callan Bentley

A little closer in, with a good perspective on the storm beach with the “gatepost” bastions just peeking over it:
Link 0.08 Gpx handheld GigaPan by Callan Bentley

A view of the amphitheater from inside, looking toward the “gateway” flanked by the two bastions:
Link 1.29 Gpx GigaPan by Callan Bentley

A view from the South Bastion “gatepost” out over the amphitheater toward the storm beach:
Link 0.06 Gpx handheld GigaPan by Callan Bentley

A boulder of ignimbrite so you volcanologists can examine its petrology:
Link 0.45 Gpx GigaPan by Callan Bentley

360° spherical photo in the gateway:

360° spherical photo in the amphitheater:

360° spherical photo atop the South Bastion (with Allen Fraser in the background):

This is a fairly extraordinary place in my decades of geological experience. It’s visually striking both in form and color, perched above the sea like a medieval rampart. I felt like a Tolkien character in its imposing setting. And then to contemplate the astonishing forces that would have etched out this hollow so high above the surf – why, it came close to blowing my wee little mind. Later in the trip, I saw some other examples of the same process, but none was so statuesque as the Grind of the Navir.
___________________________________