When I was flying back from Phase I of “Border to Beltway” in Texas this past March, I was delighted to photograph a bunch of local geology from the air, including this prominent diabase quarry in Manassas: I had never been to this particular quarry before, but as it turned out, it was one of our final destinations on Border to Beltway’s second phase, last month.

Here’s a closer view into the quarry, from its edge: 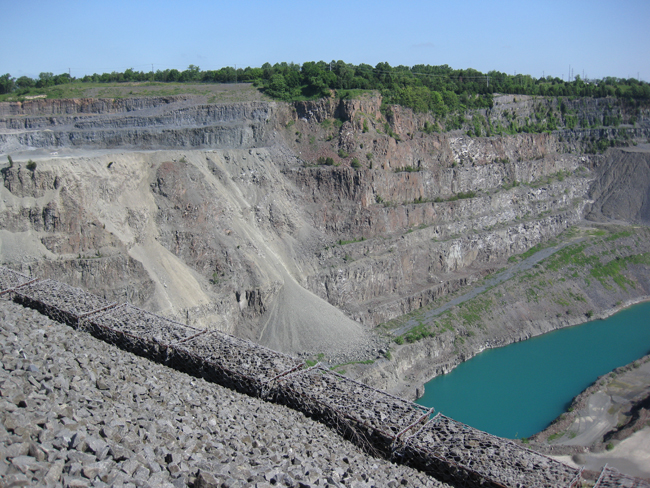 There’s a big dike of diabase (mafic hypabyssal intrusive igneous rock) in the middle, cutting across layers of the Balls Bluff Siltstone, a Triassic sedimentary deposit that was baked to hornfels by the heat released by the intrusion: Up close, the diabase weathers out along joint surfaces, with its corners and edges reacting more rapidly (due to their greater surface area) with the water in the air: This produces some nice examples of spheroidal weathering: Here, Chris (our guide) and Josh (one of the B2B students) view a moderately-dipping contact between vertically-jointed diabase and shallowly-dipping Balls Bluff Siltstone (hornfels): We got to pick through a recent blast pile for souvenirs… …And being down in the pit gave us some additional perspectives on the contact between the two units: Later on, I’ll show you some other sights from within the quarry. Thanks so much to Vulcan and to Chris for admitting us and showing us around.