Giant City State Park is a patch of protected forest south of Carbondale, Illinois, where there are some pretty cool exposures of Pennsylvanian-aged Makanda Sandstone. Here’s a typical look at one: 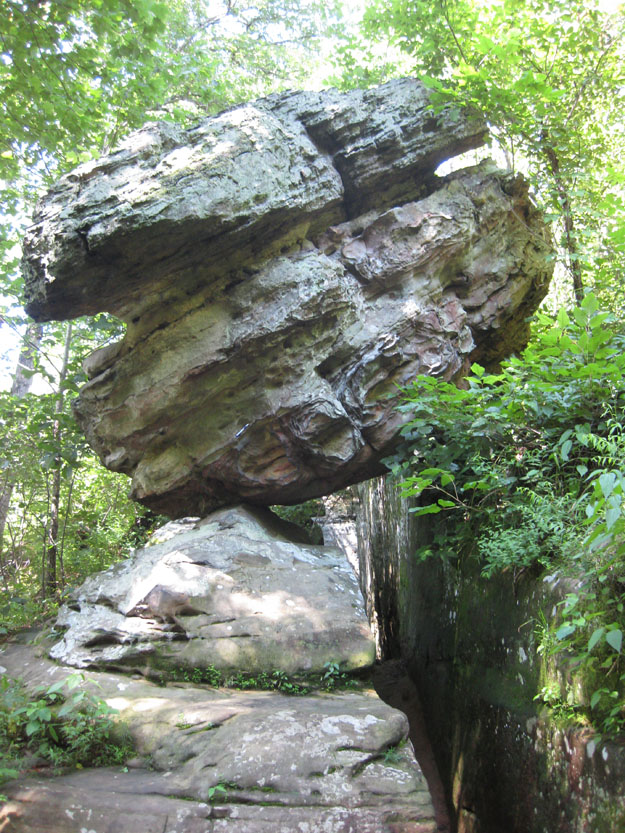 Notice the deep chasm on the right. This leads, maze-like, to other flat-bottomed and vertically-walled canyons:

The orthogonal joint sets produces some nice tall, cliff-like vertical exposures that reveal the history of these rocks in several stages: deposition by currents of water, modification by groundwater (Liesegang banding), and modern weathering (tafoni). Here’s an example, with a pen for scale: One thing you can see in profusion at Giant City is cross-bedding. Here are a couple of examples: These are interpreted as deltaic sandstone packages, prograding out into an epeiric sea (they overlie the Drury Shale) as sediment supply increased during Alleghanian mountian-building on the east coast (or really, the center of Pangea).

Here’s a package of cross-beds (foresets?), weathering out in three dimensions, providing some nice perspective on the phenomenon of “apparent dip”: Rarely, you’ll stumble across bedforms preserved three-dimensionally on the bedding plane, as these ripple marks indicate: Then there is the deposition of iron oxides as discrete nodules: …And also more ironstone deposition by groundwater, but in a different pattern: the undulating, wavelike forms that overprint bedding and stain the rock. We call this Liesegang banding: And I featured this last example a few weeks back as a Friday “fauxld”: Lastly, also on the topic of weathering, Giant City showcases some superb examples of tafoni, a distinctive “honeycomb” like pattern of pitted weathering: Here was one cliff-face that displayed some spectacular tafoni at several levels: Below, I’ve got a couple of gigapans of sandstone cliffs at Giant City. In each of them, you should be able to find examples of the geological features that I’ve mentioned above, as well as “easter eggs” like the appearance of my buddy Mr. E. coli, a dashing bacterium who makes cameos in many of my gigapans: