I hope you’re hungry, for the 30th edition of the Accretionary Wedge geo-blog carnival is all about food. It’s the Bake Sale! Let’s start our feast with something substantial, and only then move on to the dessert smorgasbord.

Andrew Alden, geology guide at About.com, has all kinds of ideas on the relationship between geology and food. If you’re not sure if you’ve got a potato or a meteorite, then check out some of his geologic recipes for kids on this page.

Perhaps some meatloaf would make a proper main course. Ron Schott thought so, and on Ron Schott’s Geology Home Companion blog, he baked a meatloaf in the shape of a roche moutonée, those glacially-sculpted bumps of bedrock. I love how the bacon strips mimic the glacial striae; Only thing could make this meatloaf better… and that’s if the “meat” were mutton, to better match its geomorphic model’s namesake. Here, I’ve annotated one of Ron’s photos to show the glacial ice with the flow direction moving over this chunk of savory goodness:

Accompanying the meatloaf should be something starchy. Matt Kuchta showcases the mechanical properties of (uncooked) pasta in a post on his blog Research at a Snail’s Pace. There, in images and video, he shows us about elastic rebound theory, but the final frames of the video (wherein he eats uncooked pasta) don’t make it look all that appetizing. 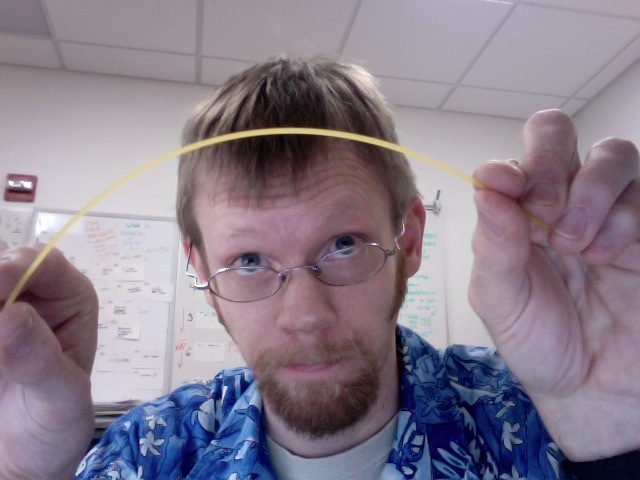 Another possibility is bread. Here, in German (but with lots of pretty pictures) is a post from Lutz Geissler that basically argues that bread loaves mimic the shape of lava pillows. (Lutz usually blogs at Geoberg.de, for those who don’t know.) Kathy Cashman and Alison Rust were thinking along similar lines when they penned a guest post for Earth Science Erratics on vesicles, lava bombs, and sourdough bread.

Anne Jefferson of Highly Allochthonous brought the final healthy dish to our potluck. She made a veggie pilaf with broccoli, onion, rice, lentil, potato, portabella, garlic, pepper, salt, coriander, ginger, and barley. Then she set it up on an oversteepened slope, and let ‘er rip. The result was a miniature debris flow that showed some patterns that mimicked natural mass wasting events. Dana Hunter (who writes En Tequila Es Verdad) also focused on surface processes with her contribution. She baked a glaciated cake to depict the geomorphic processes which yielded her neighboring Cascade Mountains. Jim Lehane brings out our second dessert course with a neat comparison in the shake-ability of Rice Krispie treats versus Jello: Which dessert is better to build the foundation of your house on? Follow the recipe for disaster (“dessertaster?”) at The Geology P.A.G.E.

Helena Heliotrope, who writes the blog Liberty, Equality, and Geology, contributed a baked model of the lunar surface, complete with coconut regolith and a basalt-tapping, meteorite impact and the breccia that filled its crater. 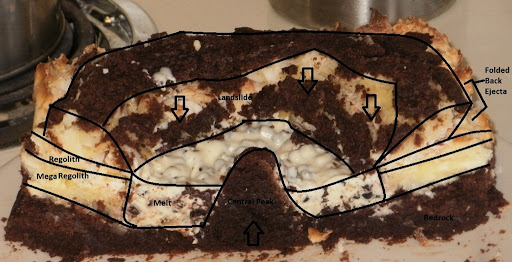 Anne Jefferson also pointed out that Maria Brumm from the now (sadly) inactive Green Gabbro had somewhat addressed this “sweet stuff shows geology” theme back in 2008:

Lockwood of Outside the Interzone also dug into the archives with this post from last June, combining a series of fantasy cake images (for Nissan cars, of all things) with some actual photos of a “zebra” cake with gneissic banding. Lockwood was also kind enough to point to the Friends of the Pleistocene geo-art blog, which explored some of the connections between food and geology in a recent post called “Food for Thinkers”. Lockwood was Mr. Link-tastic with this edition of the Wedge, pointing to all sorts of relevant posts, but he also delved into a really neat experiment on how to convert your own breath into calcite, an exercise which prompts reflections on the cycling of carbon through biological and geological reservoirs. Go check it out (bonus: you get to see what calcium looks like in its elemental state!) An illustrated hypotheti-cake inspired me to bake something real that illustrated geologic principles. It led me to create a concoction that I dubbed “Baker’s Quarry,” and I explored its fake geology, and the story behind the real cake in a couple of posts. For Chris Rowan of Highly Allochthonous, it was also all about the cross-section and the story it implied. Taking on the most famous unconformity outcrop in the world, the Siccar Point outcrop discovered by James Hutton, Chris baked a cake to match, and explained how it came to be that way. Garry Hayes, a.k.a. Geotripper, brought forth a double-header – he started off with a block diagram of subduction rendered in icing, and then finished it off with a tray full of trilobite cookies. (Thanks to David Orr (@anatotitan) for alerting me to this via Twitter.)

There’s even a dinosaur “extinction hypotheses” cake, which is featured in this YouTube video:

Cian Dawson of Point Source also baked a cake that featured dinosaurs on top, but those beasts were but surface phenomena. Cian was interested in going down beneath them to examine the hydrology below the surface. His post on a “hydrogeologically correct cake” gives all the details.

Ann of Ann’s Musings on Geology and Other Things has a cake which reminded me of paleotology: it’s got a fossil baby in it! Called “King Cakes,” these macabre pastries are apparently a New Orleans tradition. Mmm, after all these fine desserts, I was feeling a bit stuffed, but if there’s one thing that could motivate me to dive into yet another cake, it’s the prospect of finding a plastic child inside it: Curiously, the “King cake” tradition is motivated not by physical anthropology, but by religion. Check out Ann’s post to learn more.

To wash down all this cake, you might appreciate a cup of coffee. How about a cup of coffee that’s been sitting on the counter for two weeks? Silver Fox finds one in just that situation, and she deduced its age from counting the strandlines it left on the inside of her mug! Check it out at Looking for Detachment – very cool application of geological thinking to an everyday phenomenon.

And one more: Elli of Life In Plane Light suggests baked a cake with the intention to make a “schist” analogue, but it actually works better as an analogy for crystal settling. Check it out: all the chocolate chips sunk to the bottom of the batter “magma chamber” —

Check it out at her blog. While you’re at it, check out her use of corn syrup as an analogue for lava viscosity.

Thanks to everyone for their delectable contributions. Depending on how you count (intentional baking projects vs. links that just fit the theme) we had something like 21 individuals contributing to the 30th edition of the Accretionary Wedge.