On Saturday, after a fruitful 24 hours at the VCCS Science Peer Conference, my colleague Pete Berquist (of Thomas Nelson Community College) and I led a field trip to examine the geology of the Richmond, Virginia, area. We were joined by seven of our VCCS science-teaching colleagues and author Lisa Starr, a speaker at the conference.

We started off by driving down to Belle Isle, an island located on the James River’s “Fall Zone.” I’m grateful to Chuck Bailey of the College of William & Mary for introducing me to the geology of Belle Isle earlier this year. Using a field guide that Chuck wrote, Pete and I showed our colleagues around, familiarizing them with magmatic fabrics, xenoliths, pegmatite dikes, right-lateral faults and other fractures, the economic geology of the island, and sculpting of the rock by the flow of the river’s water. Because I’ve covered these topics before on this blog (see links above), I won’t go into them again. But here are a few photos of the group at Belle Isle: 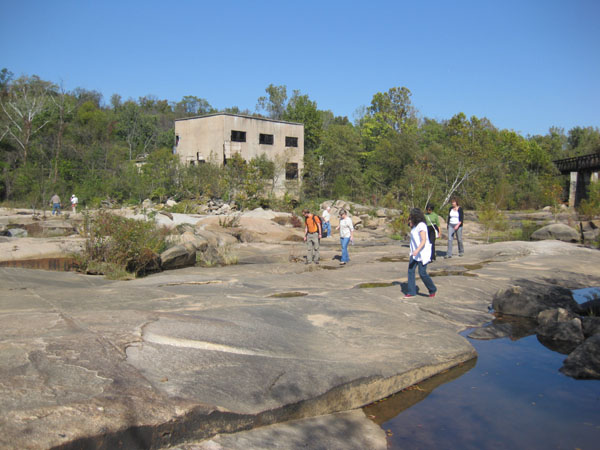 From Belle Isle, we went to our second outcrop, dubbed “Sliding Hill.” This is a place right next to Interstate 95 where Stony Run has incised into the unconformity surface separating the Piedmont rocks from overlying Coastal Plain strata. Here, you can view an exposure of the nonconformity between the Mississippian-aged Petersburg Granite and the muddy strata of the Eastover Formation, which are Miocene in age. Here’s a view to the south towards Gander Mountain (a store, not a landform!), with Sliding Hill visible on the lower right, a slope constantly sloughing off gray mud: A schematic cartoon of the outcrop can be seen below: This is a pretty exceptional location: a spot where a pluton injected during the Alleghanian Orogeny (~320 Ma) has been exposed at the surface (a process entailing the erosional removal of ~15 km of overlying crust), and then submerged beneath a rising sea. That sea deposited mud which became the Eastover Formation, which we know to be Miocene (~10 Ma) in age on the basis of fossil content. Essentially, this is the boundary between the Piedmont and the Coastal Plain provinces. The Piedmont is characterized by rolling hills underlain by igneous and metamorphic rocks, and the Coastal Plain is draped atop it, dipping gently towards the Atlantic, like a series of sedimentary blankets.

At Sliding Hill, you can find both shark teeth and whale bone fossils in “lag” deposits at the base of the Eastover. Searching for fossils was a favorite activity of our field trip participants. Here, Mike scours the sediment for teeth: Here’s an iPhone photo of few of the shark teeth, with my Tectonic Crossroads pen for scale: The granite is about 320 million years old according to U/Pb ratios in zircons, and the fossils indicate that the mud layers are about 10 million years old. That means that a lot of geologic time has elapsed at this location without the generation of any rocks to record the passage of that time. The unconformity surface therefore is an indicator of that “missing time.” How much time is missing?

…About 310 million years. Or, as Pete puts it, “thiiiiiiiiis much”: We examined the granite outcrop at Sliding Hill, and compared it to what we had seen earlier in the afternoon at Belle Isle. The two were very similar in many regards, but had some intriguing differences, too.

Here’s the outcrop, with Mike’s hammer for scale: As at Belle Isle, this outcrop of the Petersburg Granite displays schlieren (different ratios of mineral composition, interpreted as magmatic flow lines) and xenoliths (chunks of host rock caught up in the magma before it solidified into granite). There were also several nice dikes cross-cutting the granite, including these two: Mike Peglar, a biologist at NOVA, called me over to see something interesting he found on the outcrop. Naturally, I assumed it would be geological, but as it turned out, his own biases prevailed. It was a praying mantis (see arrow): It turns out that the mantis, a gravid female, was checking out a unique aspect of this outcrop… igneous garnets: These garnets indicate that, at this location, the Petersburg magma was peraluminous, meaning it was chock full of excess aluminum, probably because it was derived from the partial melting of a sedimentary source. One mineral phase that could readily take up that extra aluminum is garnet. While most garnets you’ll ever encounter are metamorphic in origin, occasionally you might find some of these igneous garnets.

The mantis was a real treat. At this time of year, the females are laying their eggs in large foamy masses called ootheca, and which will keep the eggs safe through the winter to hatch in the spring. I love mantises. More than most insects, they convey a sense of independence and personality. This lady was a real charmer: …And that about wraps it up for our afternoon in central Virginia’s Fall Zone. Where the Piedmont meets the Coastal Plain, there are some interesting stories to be told.