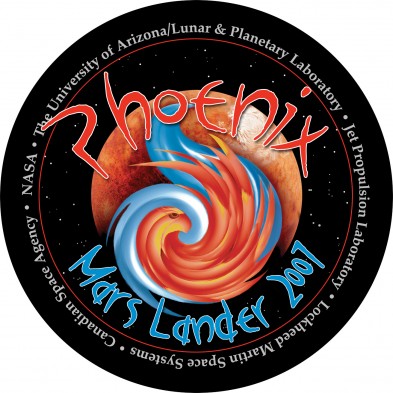 I would be a very Bad Martian if I did not mention that the Phoenix lander is arriving at Mars today! In a few hours! I will be hosting a public event at Cornell tonight where we will be watching coverage on NASA TV and an interview with Steve Squyres on CNN. I’m not involved in the Phoenix mission, but it’s pretty exciting nonetheless. Remember, we as humans have only ever successfully landed on Mars six times. Fifty-five percent of all Mars missions have failed. If the solar system had a Bermuda triangle, it would be Mars.

Phoenix will be landing in the martian arctic, where measurements from the Mars Odyssey orbiter indicate that there is water ice just under the surface, and its primary mission is to use its seven-foot backhoe-like arm to dig up ice-rich soil and analyze it. With its mass spectrometer, Phoenix will be able to detect organic (carbon-bearing) molecules if they are there, possibly settling a thirty-year controversy over whether such molecules can exist in the soil on Mars. Phoenix also carries a wet-chemistry lab to measure the reactivity and abundance of certain elements, microscopes to study the minute details of the soil, and conductivity probes to, well, measure the conductivity of the soil (and therefore figure out how much water and dissolved ions are present). But wait, there’s more! Phoenix also has cameras (of course) and a meteorology package.

Tonight’s landing is being billed as “seven minutes of terror” by the press, and that’s probably a pretty accurate assessment of how the scientists and engineers involved in the mission will feel. From the moment that Phoenix touches the upper atmosphere to the moment that its feet touch the ground, the spacecraft is entirely on its own. Mars is so far away that by the time we on hear get the message that it has begun its perilous descent, it will all be over, one way or the other. Years of work, scientific careers and millions of dollars hang in the balance, and everything has to execute perfectly. Check out this video for more details about those fateful seven minutes:

Tonight, while you’re barbecuing and otherwise celebrating the holiday weekend, take some time out to watch NASA TV or news coverage of the landing. If nothing else, Emily Lakdawalla has a great timeline for you to follow. I promise you, no matter what happens, Phoenix will be front page news tomorrow. And I promise that tonight, tears will be shed by the scientists and engineers on the Phoenix mission. Whether they will be tears of joy or loss… well, we’ll have to wait and see.

Our hopes are with you, Phoenix.

Posted in: NASA, Phoenix, Water on Mars No Comments/Trackbacks »