DARPA is Working on What?! 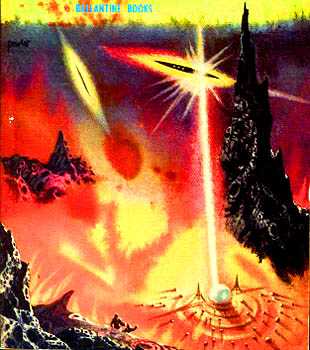 Arthur C. Clarke was a brilliant man and was known for coming up with ideas that were not only astounding, but also plausible in the near future. He was one of the first to propose communications satellites in geostationary orbits. He also invented the concept of a space elevator that would lift cargo from the surface of a planet all the way out to space. People are now actively working on the technology to build one.

Not all of his inventions are so benign though. In his novel Earthlight, he describes a powerful weapon called the “stiletto beam” that uses magnets to propel a deadly shaft of molten metal at a target. Here’s an excerpt from the book:

Wheeler never knew why the fortress waited so long before it used its main weapon. Perhaps Stephanson, or whoever was in charge, was waiting for the attack to slacken so that he could risk lowering the defenses of the dome for the millisecond that he needed to launch his stiletto.

Wheeler saw it strike upward, a solid bar of light stabbing at the stars. He remembered the rumors that had gone around the Observatory. So this was what had been seen, flashing above the mountains. He did not have time to reflect on the staggering violation of the laws of optics which this phenomenon implied, for he was staring at the ruined ship above his head. The beam had gone through Lethe as if she did not exist; the fortress had speared her as an entomologist pierces a butterfly with a pin.

From Earthlight, by Arthur C. Clarke.
Published by Del Rey in 1955

Crazy, right? Just science fiction? Yeah, I hoped so too, but an article today on technovelgy.com announces that the Defense Advanced Research Projects Agency (DARPA) is trying to build just such a weapon. It goes by the creative acronym MAHEM (MAgneto Hydrodynamic Explosive Munition). That’s right, they are seriously trying to build a weapon that magnetically propels beams of molten metal with enough force to pierce the armor on a tank.

I wonder how much that will cost to develop…

Posted in: Not Mars, Science Fiction No Comments/Trackbacks »