I was fortunate enough to spend several weeks in Yellowstone National Park this summer, doing geophysical surveys in hydrothermal areas. I’ll be talking about those elsewhere in a few weeks (keep an eye on the AGU Instagram!), but in the meantime I wanted to show off some of the other excellent features of the park. Fieldwork in Yellowstone – and especially fieldwork with electrical equipment – is at the mercy of weather, and in the summer that often means stopping for thunderstorms even if it’s still light out. On an ideal summer day we’d be able to work until six or seven, but when we had to stop because of lightning, we tried to take time to see the hot springs and geysers that are open to the public. (It’s a lot nicer to walk around on boardwalks than it is in the backcountry!)

Nearly everyone who’s read a travel magazine has seen photos of Yellowstone’s thermal features, and they are fantastic. But seeing them as a scientist adds another layer of fascination, because there are so many things to think about. How hot do they get? Why are they there? And why are they so colorful? In science, color is used to show gradients, and in many parts of geology, temperature scales. Visually rainbows are very impactful (even if they aren’t good in graphic design terms), but for most people, a rainbow is composed of “warm” and “cold” colors – reds are “warm” and blues and greens are “cool”. In Yellowstone, however, that color scale gets turned on its head. Hot springs and thermal features in the park can have temperatures of up to 93 °C (199 °F – the boiling temperature at the elevation of the Yellowstone Plateau), but it’s waters much cooler than boiling temperature that shows the warmest colors. Totally counter-intuitive, when it’s based on your usual understanding of the color scale – so why the reversal? “Thermophile” is a fancy way of saying “heat-loving”, and it refers to the bacteria that live in almost every hot spring at Yellowstone. They’ve adapted to live in the near-boiling temperatures and acidic (or basic) waters that would kill other critters. And they’re pretty colorful, for various reasons – some photosynthesize and contain chlorophyll, others use chemosythnesis to make their food.

Here’s an overview of the colors, their associated bacteria, and the temperatures they thrive at (courtesy of the NPS):

Bacteria like this account for the reds and greens and yellows in the hot springs – but what about the blues? Well, those are, in fact, not actually blue. The hottest waters in the springs and geysers, which can sometimes even be above boiling (or superheated), aren’t hospitable even for the most hardy bacteria. Because they lack bacterial life, they’re extraordinarily clear. The blue color comes from the scattering of sunlight in deep clear water (it’s the color that scatters the most, so that’s what we see): 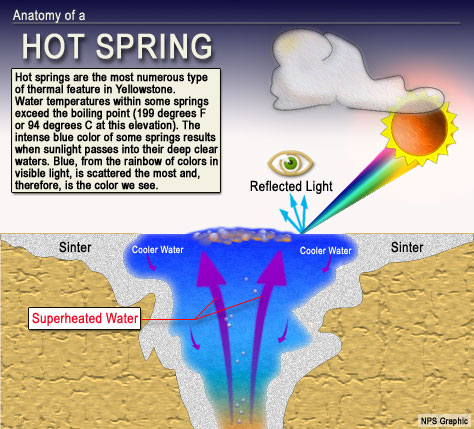 An NPS graphic explaining how light is scattered in a hot spring at Yellowstone. (Image from https://www.nps.gov/yell/learn/nature/images/hotspring_works.jpg)

So here we have a range of colors from reds and oranges: And the very clearest, hottest blues: This spring on Geyser Hill is so hot that bacteria don’t live in the spring, only downstream

Some springs even show a full range of rainbow colors: The combination of the surface manifestation of Yellowstone’s volcanic activity and the biology that exploits them makes for some really beautiful scenery. Every once in a while someone asks me if thinking like a scientist ever interferes with my ability to enjoy the landscape around me, and my answer is always that it never does. If anything, it makes it better – endlessly entertaining as well as beautiful. Rainbows in the landscape.