It’s amazing how quickly I’m capable of abandoning my blogging resolutions, really. Here we are, a couple of weeks into the new year and I’ve failed to a) post more often and b) talk about my research. (I swear I have a post in the works about that, but it’s gotten long and unwieldy and in desperate need of editing!) But this weekend I’m going to keep a couple of the other resolutions, and blog about the trip I took yesterday to the Marin Headlands.

Those of you who’ve been hanging around the AGU blogs for a while might remember Callan’s series on the geology of San Francisco and his visit to Marin a couple of years back. I’m slightly embarrassed to say that it’s taken me until yesterday to actually drive across the Golden Gate Bridge. Somewhat typically for the San Francisco area, my first crossing was entirely foggy, to the point where it wasn’t apparent we were actually on a bridge. So once we crossed over into the Headlands and found parking, this is the scene we were greeted with at Point Bonita: Point Bonita with a typical morning view in the San Francisco area. There’s a lighthouse out there.

The rocks we were going to see make up one of the Franciscan Complex terranes (blocks of tectonic plates that are broken off and accreted, or attached, to other plates). The Marin Headlands terrane contains a bit of basaltic ocean crust covered by chert deposits (formed by the deposition of microorganisms with silica skeletons, called radiolarians) and overlying continental-derived sandstone (often greywackes). The cherts are about 100-200 million years old (Early Jurassic to Late Cretaceous) and the sandstones are about 90-100 million years old; I haven’t been able to find exact ages for the basalts, but since they underlie the chert, they’re at least 200 million years old. Drew sitting on a fault contact between greenstone and greywacke.

But my group for the day had three volcanologists, and we were there for the basalt. The cool thing about the basalt here is that it erupted underwater. When this happens, the flows form “pillows” as the surface cools instantly in the water. When the still-molten lava inside a pillow cracks it open, it oozes out and inflates briefly before cooling and starting the process over again. A lot of the oceanic crust forms this way at spreading ridges, since you just can’t get lava flows underwater like you can on land. (Here’s a video illustrating this process – skip to 1:10 to see pillows forming.) In the Marin Headlands, all this basalt has been shoved up to sea level, and forms the base of a lot of the cliffs you can visit. But here at Point Bonita, it forms a significant portion of the outcrop that the lighthouse is perched on (and that you walk past to get to the bridge and lighthouse). Hannah showing off some of the first good pillow basalts on the way to the lighthouse.

To get to the lighthouse, you get to go through a tunnel in the cliff (which is much preferable to the old way the keepers got there, climbing around the outside of the cliffs on a very narrow path). You do have to wait for the Park Service to open the gate for you, though. But the wait is well worth it. As Callan mentioned, Point Bonita has several sea arches, and they’re made of pillow basalt. The first arch – the pillows are best-looking down at the bottom right. The Point Bonita Lighthouse and arch #2 – with much better views of pillows. The bridge is fairly new, but it can hold more than 2 people at a time (the old one couldn’t!) Looking at the arch from the other side. The pillows are really clear here! I’d say they’re probably about half a meter to a meter thick, in most cases. Detail of the pillow basalt. Here you can see where the rinds formed and (presumably) some of the internal lava drained away and went elswhere, leaving an onion-like layering.

In some cases the basalt has been altered by low-grade metamorphism to greenstone, which contains the minerals chlorite and pumpellyite. Hannah and the greenstone.

In other spots, the basalt has been badly weathered to clays and iron oxides. Places where it’s fresher are spots where erosion from waves or gravity has broken off the outer altered bits and exposed the greenstones or relatively unaltered basalt. Weathered basalt on top of fresher exposures, taken from the lighthouse bridge.

The dark cliffs and fog and lighthouse were all very ‘atmospheric’, as well as geologically exciting. 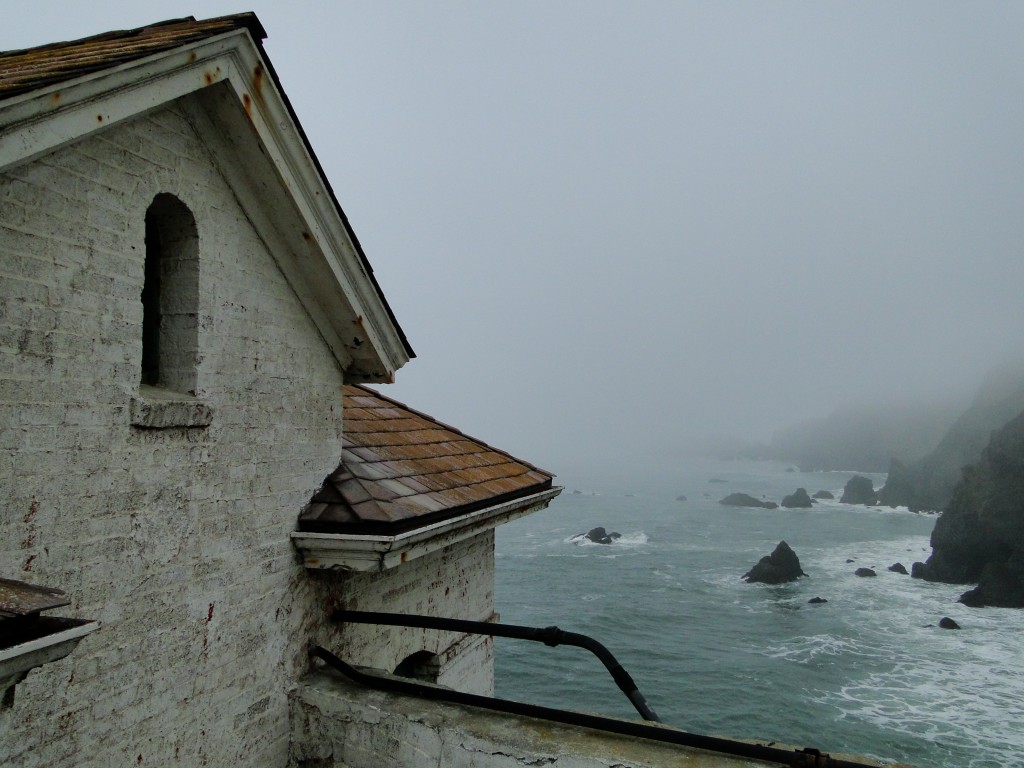 Looking out from the lighthouse along the coast. Fun fact from the ranger: those gutters are made entirely of carved redwood. It’s pretty impressive that they haven’t rotted away!

Later in the day we had less fog, more sun and the chance to go explore other parts of the Headlands, including Rodeo Cove (where there were even more pillow basalts), but I’ll save that for the next post!