On my last day in Edinburgh, Dr. Caco and I took a bus ride south of the town to Roslin. Those of you who are Dan Brown fans might remember the last scenes of The Da Vinci Code movie, where the two heroes end their search for the Holy Grail ” at Rosslyn Chapel. (Part of the verse that leads them there, if I’m getting it right, is “The Holy Grail ‘neath ancient Roslin waits…She rests at last beneath the starry skies”).

While the history of the chapel was tweaked just a bit for purposes of the movie, the chapel itself is amazing. It was built between 1446 and 1484 on the orders of Sir William St. Clair, and was originally meant to be cruciform (cross-shaped, like the larger cathedrals you see elsewhere). When Sir William died in 1484 construction stopped, so the chapel itself is really just a portion of what was meant to be a much larger building; you can see the unfinished walls on the right of the photo above.

Rosslyn isn’t just a beautiful example of a medieval chapel, it’s a stonecarver’s dream – and it’s got a lot for a geologist to look at, too. Aside from the amazing flying buttresses that support the roof, there’s carving everywhere – and I really mean everywhere. The Carboniferous sandstone it’s built from is local, quarried in two rounds (first for the medieval portion of the church and then in Victorian times for the baptistry at the west end – you can tell the difference by the color and weathering of the stone). The guides you can get from the visitor’s center suggest that the medieval workers did their quarrying in Roslin Glen, while the Victorian addition might have come from Craigleith in Edinburgh. Craigleith quartz sandstone is about 330 million years old and contains features like crossbedding that indicate it was probably laid down in rivers or deltas; I can’t find much on the Roslin Formation aside from this mention in a 1905 Edinburgh Geological Society publication, but it’s probably from the same sequence (there’s a bit of clarification on the sedimentary sequences in this BGS classification document). Gothic flying buttresses made from local sandstone. If you look closely above the funny face on the drain, there’s a flower with a hole in the middle – apparently that particular spire housed a beehive, and the flower is where the bees went in and out!

You can clearly see the difference in weathering on either side of the chapel. The North side was more affected by rain, and in places has a green tinge because of mold or lichen in the rocks. On the south side, sun and westerly winds were a bigger issue. The whole chapel suffered from chemical weathering and staining from industrial pollution (particularly from coal mining, which was one of Edinburgh’s main industries in the 19th century). Standing on the south side of the chapel, with the unfinished transept to the left (you can see the fonts for holding holy water, which would normally be on the inside of the building).

The sandstone is quite badly weathered in some places on the chapel’s exterior, but the weathering shows off some really beautiful cross-stratification. Dr. Caco pointing out crossbeds on the south side Severe weathering on a cornerstone on the south side, exposing the leeward slope of the crossbeds

The Da VInci Code did a lot to help the chapel, which was in the process of falling apart before the book and movie drew worldwide interest to the site. A poor restoration job in the 1950s resulted in the interior of the chapel being painted with what was probably an oil-based paint, and any archaeologist can tell you that’s a terrible idea (it traps moisture inside already porous sandstone, and can basically speed up the mechanical weathering affecting the stone). When tourism picked up, the caretakers were able to not only build the adjacent visitors center and museum but also do a proper restoration to stabilize the crumbling stone and replace bits of it that have weathered away. (In the movie there’s a scene where Robert Langdon and Sophie Neveu descend into the crypt and poke around in back rooms stuffed with documents; in reality, the only room off the crypt is used to store bits of masonry that are being restored or copied). Photography is restricted inside the chapel, but there are dozens of images available on the chapel website and elsewhere on the web. This shows one of my favorite parts of the chapel, the “starry sky” that gets mentioned in the movie. 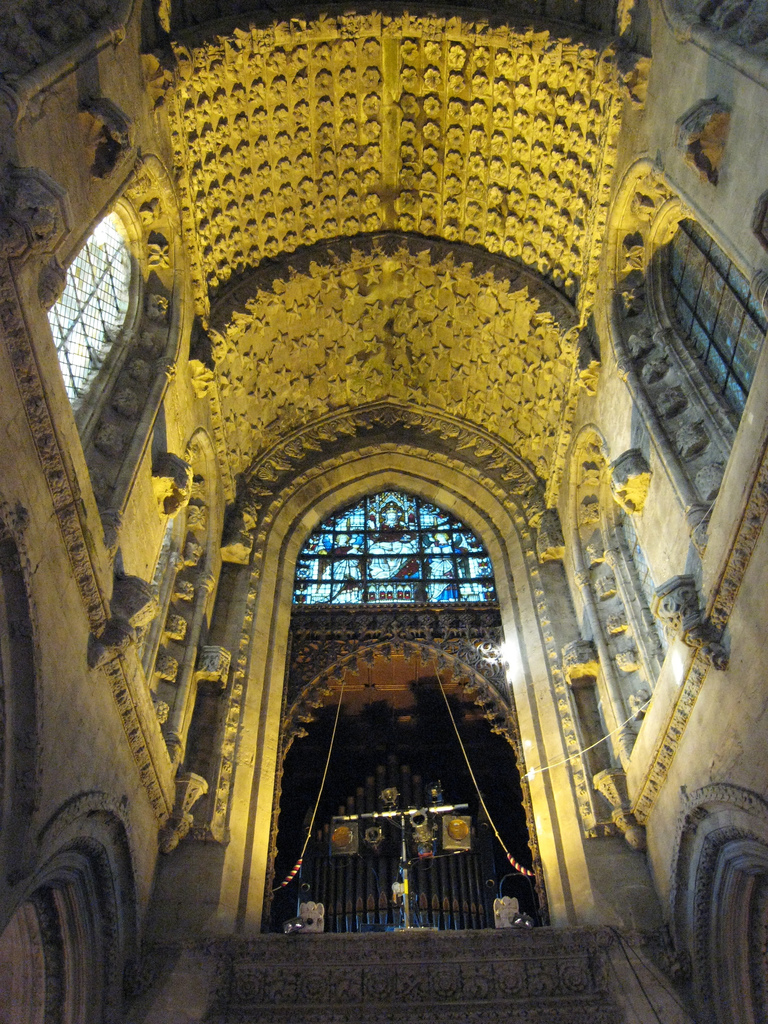 Part of the “starry sky” on Rosslyn Chapel’s ceiling; photo by Jan on Flickr.

I love the little details that the carvers put into everything – it’s a tiny chapel, but you can seriously spend hours here looking at every bit of it. A weathered downspout on the north side Another downspout in the shape of a lion Hours looking at a chapel where much of the carving is overhead results, of course, in a terribly stiff neck. Fortunately, the chapel is still in use today and has plenty of seats and comes, as every good historical site should, with its own resident cat – named William, of course.