“Is the volcano erupting yet?” (A quick Pompeii review) 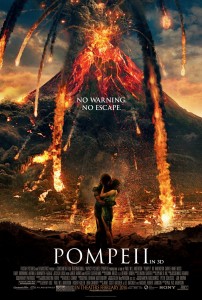 So, you may have seen me mention on Twitter that I was planning on seeing Pompeii this week – and I did, properly fortified with some nice cider at a nearby pub beforehand. I’m not going to give you the full rundown of the science and history of the eruption, because David Bressan is already working on a series of excellent posts about that. Instead, I’m going to treat this as a quick-and-snarky guide to whether you want the movie to feature at your next “bad geology movie night”.

The answer? Maybe. Expect it to be an exercise in completely transparently appropriated storylines, minimal character development, and pretty much spending the first half of the movie waiting for the volcano to erupt. That said, the eruption wasn’t all that bad (if you can ignore the overabundant lava bombs and the tsunami). In the tradition of thumbs up/thumbs down verdicts for movie reviews and gladiatorial fights (even though it turns out thumbs down doesn’t actually mean “kill him”), here’s my take on the awesome, the “meh” and the cringe-inducing. Overall? As a volcanologist with an archaeology minor, I’d say the filmmakers struck a decent balance between spectacle and historical accuracy (aside from the tsunami). And the movie wasn’t bad in a purely aesthetic sense. But don’t expect to be entertained plot-wise, unless you can (as I did) concentrate on Kiefer Sutherland being a sinister moustache-twirling villain (until the volcano toasts him).

“Is the volcano erupting yet?” (A quick Pompeii review)