Streamflow and storms at Glen Falls

In between bouts of hottish weather (I don’t count it as hot unless it’s well into the nineties and the humidity is fairly high) and the occasional cool day like today, we’ve been having some fairly spectacular thunderstorms in Buffalo. That’s no unusual thing in the summertime, but after teaching a chunk of an intro course about streamflow and what happens after it rains, I’ve started paying more attention to water features in my area.

One of my favorite examples is the Glen Park waterfall in Williamsville, NY. Glen Falls, like the considerably more spectacular Niagara Falls to the north, is the result of backward migration from an escarpment – in this case, the Onondaga Escarpment instead of the Niagara Escarpment. The Onondaga Escarpment is usually less than 10 meters high, but it’s a great example in miniature of the same processes going on at Niagara Falls. Waterfalls often form and migrate upstream from knickpoints (sharp changes in the slope of a stream or river channel which are often caused by differential erosion of a resistant rock layer overlying a softer one). In this case, the hard Onondaga limestones and dolostones overlie the Salina Group, which contains conglomerates, shales and sandstones.  Glen Falls is much safer to get close to than Niagara Falls, and equally nice is the fact that the USGS has a stream gage located just below the Falls (to the north on Ellicott Creek).

Stratigraphy of the Western NY area, including the Onondaga and Niagara Escarpments. From http://www.glyfac.buffalo.edu/Faculty/jorgm/WebJorg07/gly103trip.htm

Here’s an example of the waterfall and the stream when the flow is fairly low: 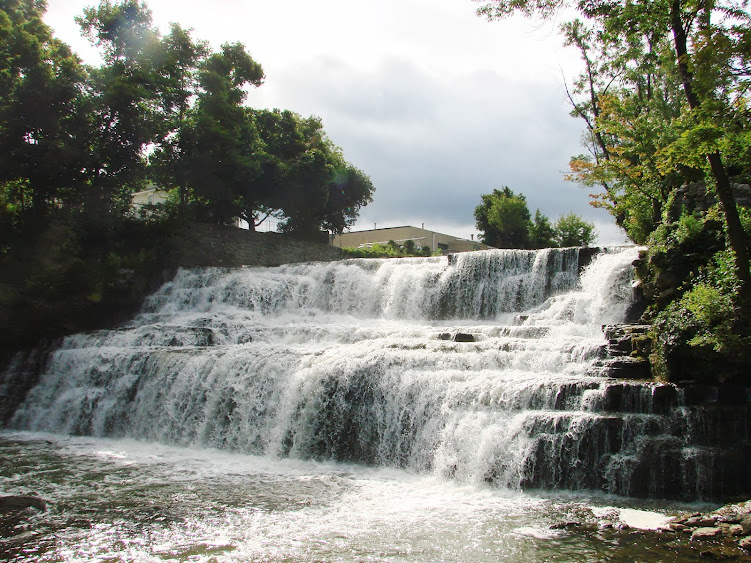 Here’s what the discharge looked like that week at the stream gage (there was a bit of rain just before this photo was taken, but not a storm):

In contrast, here’s a photo and a couple of videos of Glen Falls a day or two after we had a large rainstorm a few weeks back: And the stream gage data on the storm:

If I’m remembering right, the storm was on the 29th (we had an inch or two of rain).

I love these discharge graphs, because you can see all sorts of patterns in them. Individual storms, especially rainy weeks (or snowmelt events), and seasonal increases and decreases in precipitation. Here’s the Ellicott Creek one for the past two years:

So at this location, discharge varies seasonally between 20 and 200 cubic feet per second. We have higher discharge in the winter because we tend to get a steady input of water from precipitation (melting snow), as opposed to the summertime, when we mostly just get spikes from thunderstorms.

This is a great place to observe streamflow and do things like discharge calculations, because the streambed is actually confined in this location by concrete and stone walls and crossed by a bridge. So it’s really easy to figure out the cross-sectional area of the stream, and then all you have to do is play ‘Pooh Sticks’ with a stopwatch and voila, you have your discharge! (I believe there’s actually an EarthCache activity at the site to do just that, so I won’t give any of that information away here.)

Streamflow and storms at Glen Falls