I’m forgoing my day-by-day posting this year because my schedule has been nuts – I’m hardly able to finish a meeting before I have to move on to something else!

On Sunday afteernoon I arrived to happily clear skies and a relaxing ride into San Francisco. Naturally, this meant I had to immediately start going to meetitngs – training for moderrating my first oral session, and our annual student representative meeting. (Students, watch out for new developments in your sections, including webinars, mentoring programs, and new volunteer opportunities throughout AGU! The Union Council has already added three student and three early-career seats, and they’re looking to get students involved in even more ways.) 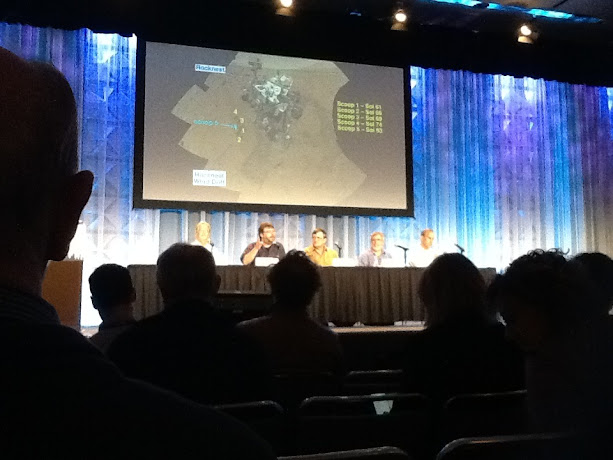 MSL scientists at Monday's press conference on the Curiosity rover

On Monday, I started my day at the press conference held about the Mars Science Laboratory mission and the Curiosity rover. Contrary to the rumors that a major discovery was to be announced, the panel of mission scientists instead discussed the state of the science so far -their  pleasure at the successful operation of a suite of truly complicated and delicately calibrated instruments, the exciting fact that their landing site has turned out to be an ancient riverbed, and the results of some of the first soil sampling (which has revealed some suspect organic compounds that are likely a by-product of the analytical process carried out in the mass spectrometer rather than Martian in origin.) The scientists also cautioned patience; after all, they are “writing a ten-thousand page user manual for the rover as they read it”, and operating at the speed of careful science besides. I was satisfied with their comments in a scientific sense, but I got the feeling that the assorted media sources that were gathered were disappointed not to be able to report on a big life-on-Mars type discovery.

I browsed some posters and attended the lunchtime Presidential forum presented by NPRScience  Correspondent Ira Flatow (a very funny and engaging speaker), and then it was time to present my poster in a volcanology session on “Advances in the Characterization of Geothermal Systems”. My current work deals with numerical models that simulate the movement of heat and water through inactive (cool) lava domes, with connecting elements to my work withhydrothermal alteration  and dome stability. You can look up the poster online at here. (I actually prefer posters  because you get a chance to talk with  more people for a longer time, and you can really get into some useful discussions. Thanks to everyone who stopped by to give me comments and advice!)

On Tuesday, I had another full day that started with a speech about the Thriving Earth Exchange at the Student Breakfast. (Long story short, it’s like Kickstarter for Earth scientists, connecting them to people with problems that can be solved by geoscience expertise and funders with the money to make the solutions happen. If you check out the site and leave comments, you could also win an iPad Mini, so please have a look! And if you see me at the meeting, stop and ask me about it – I’m happy to chat.)

After the breakfast I went to the opening of the exhibit hall and joined hundreds of my peers in the mad rush for the really good calendars (and other neat scientific swag). The hall is really big, so this can easily take an entire morning! I spent lunch in the executive committee meeting of the Volcanology, Geochemistry and Petrology Section passing on what I’d learned at the student rep meeting, and then it was time to go co-chair a Public Affairs session on social media (Social Media 101) with John Cook of the fantastic Skeptical Science website. We had a fascinating group – everyone from a developer of Medeley to Chris Rowan (geoblogger at Highly Allocthonous and Twitterer extraordinaire) to climate scientist Michael Mann. The session went really well (and was heavily discussed on Twitter, appropriately)!

My final “duty” of the day was to sit on the panel at the Bloggers Forum with Chris and several others and talk about our experience as science bloggers (and how other people could join in). It was a repeat of the panel we gave two years ago, but I think this year’s was a bit better attended and had more involved questions from the audience. And many of them joined us at a local pub later in the evening for drinks and a continuation of the discussion of the finer points of blogging – and as everyone knows, geoscience conversations are always better with a little beer!

Today I will be taking a rest from the more administrative side of the meeting and attending poster sessions and talks in volcanology for a change. Not that I don’t love social media, but I need to get my science in too!.