Note to readers: The trail that I describe in this post was marked as open when I visited, but may be closed at times (especially in the winter). Please respect trail signs indicating closures and, if you’re in doubt, check with park officials. The Niagara Falls State Park offers hiking tours on these trails if you’d prefer to have a guide.  I should emphasize that any of the Niagara Gorge hikes carry an element of risk due to the potential for rockfalls and the danger of falling into the river or traversing rough terrain. It’s also very easy to injure yourself on the ruins, and I absolutely do not recommend wandering off the trail or ignoring the trail signs. Be careful, and remember that you hike these trails at your own risk!

Niagara Falls has a long history of power generation, from the earliest canals of the mid-19th century to today’s massive hydroelectric stations. Nowadays, most of the process is hidden from visitors to the Falls; the tunnels and canals on either side of the border are either hidden or eclipsed by other development, and the stations themselves are far enough down the river that some visitors never see them. You can take tours of bits of the stations, but the tours are very contained and only ever visit small bits of the buildings. There is, however one place where you can see part of the historical aspect of hydroelectric power at the Falls – and what happens when natural processes interfere with man-made constructions.

The Robert Moses Parkway parallels the Niagara Gorge just north of downtown Niagara Falls, and the very first stop on the drive is the Niagara Gorge Discovery Center (once called the Schoellkopf Geological Museum). Having been on enough field trips to the Falls, I decided to skip the museum, and went on a hike down one of the trails that begins at the Discovery Center. The view from the top of the American Falls Gorge Trail is pretty great; it’s one of the only spots along the Gorge where you can get a good look at the Horseshoe Falls. In other parts of the Gorge you have to descend stairs to get to the trails at the bottom, but here there’s a road with a nice shallow incline. It gives a great tour of the stratigraphy of the Gorge, from the resistant Lockport Dolostone at the top of the trail to exposures of the Rochester Shale and Clinton Group shales and sandstones at the bottom. The trail itself is rocky and a slightly strenuous hike; it’s also littered with the rusted-out bodies of quite a few old cars and bits of machinery, having been used at some point as a dumping ground. (I’ve heard that some of the local scout groups may be working on cleaning it up, which will make it much less off-putting for hikers!) If you keep going, though, you’ll come right up to the river, and eventually make it to the old Schoellkopf Power Station. The ruins of this power plant were the second station built on the site, and were completed in 1895. Both buildings were constructed by Jacob Schoellkopf, who had purchased a hydraulic canal, the land around it and the power rights in 1877.  The plant eventually became part of the Niagara Falls Power Company in the early twentieth century. But by 1956, water that had been seeping through the rock in the gorge wall behind the plant had weakened it. On June 7th, workers noticed cracks in the rear wall of the plant, and at 5 that evening a catastrophic collapse destroyed more than 2/3 of the station. One man died, several had to be rescued from the Niagara River, and debris from the collapse made it as far as the Canadian side of the Gorge. (More detailed accounts and photos can be found at the Niagara Frontier website and the website of author Ginger Strand, who has written extensively on the history of Niagara Falls.) Before the collapse, the plant was generating 360,000 kilowatts of power for the city of Niagara Falls; afterward plants on the Canadian side picked up the slack, and the destroyed plant was later surpassed by redevelopment of the hydropower infrastructure in the area, including the construction of the Robert Moses Generating Station farther downstream. Outlets Tailraces at the base of the gorge. "Stalactites" on the roof of the penstock outlet tailrace.

I decided to stay out of the  tailraces, but the trail continues on top of them. There’s a lot of debris and much of the plant has been covered with vegetation, but you can still see the old buildings and spots on the side of the Gorge where the rockslide ripped away the plant’s walls. 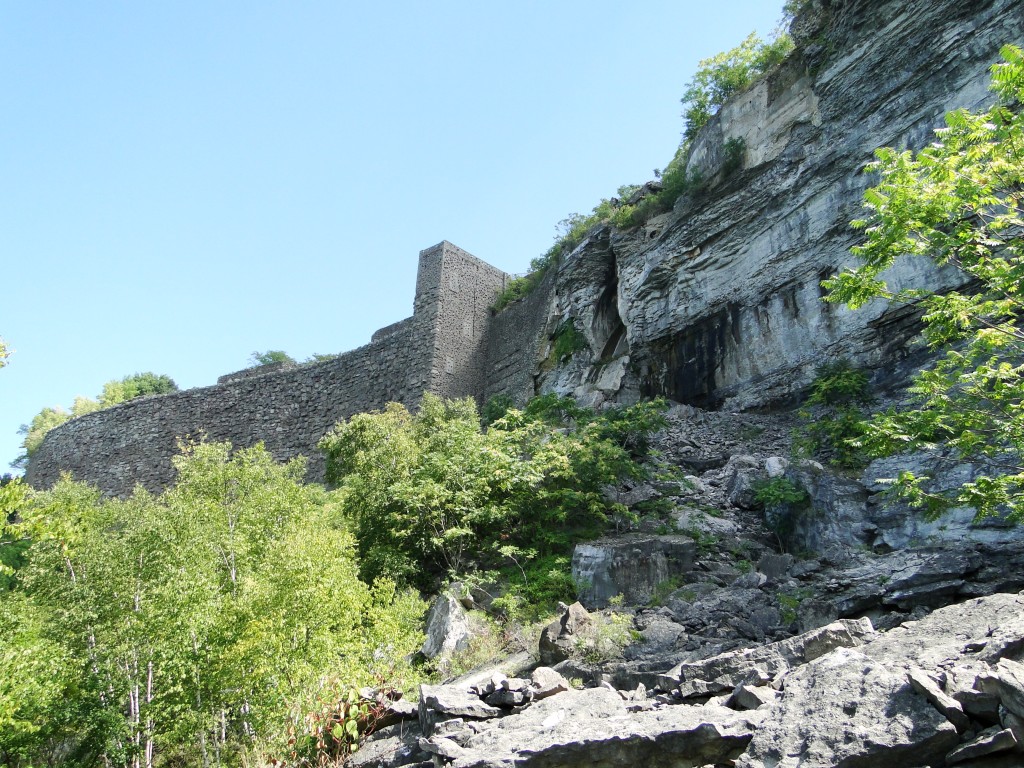 The remaining wall (above the penstocks) is actually located just below the Discovery Center, although there’s currently some construction work that prevents visitors from getting to the edge of the wall to see into the Gorge. 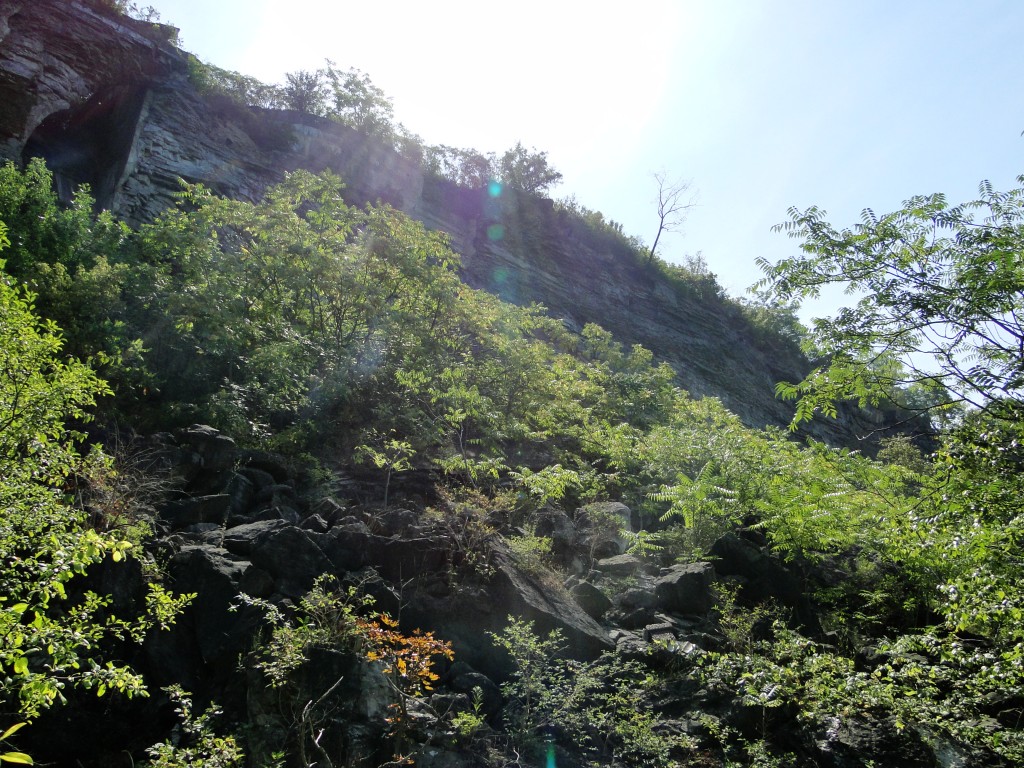 Somewhere under this rubble (and a lot of poison ivy) is one of the old turbines. It’s quite an eerie site; you can just hear the roar of the American Falls in the distance, but hardly anyone ever comes so far down the trail. Tourist helicopters seem to like to swoop overhead, and it can sometimes give you the feeling that you’re trespassing (even though the trail itself was clearly marked).

Poking around the rubble of the plant is interesting, but it’s also a good chance to look at rocks from the top of the stratigraphic section; here’s a big chunk of dolostone with a vein of more chalky stuff through it. And (possibly) boudinage? This was the neatest bit – if it was in a metamorphic rock, I would call it a back-rotated porphyroclast, but in this case it’s a chunk of chert in a chalky vein, so I’m not sure what to call it. It seems to indicate that there was something going on in the way of deformation, but I wonder if it was before or after lithification. Any ideas? Most of the remains of the power plant are reachable on the American Falls Gorge Trail, but the American Falls no longer are (the State Park authorities have closed the trail once you get past the plant). The remaining trail apparently used to go all the way under the Rainbow Bridge to the Maid of the Mist launch, but it’s now so overgrown and littered with trash that it’s not worth trekking through the underbrush, even if it were legal, which it may not be. So this sign was my turnaround point. Getting out of the Gorge is pretty strenuous even without climbing a couple hundred stairs, but it was definitely worth the chance to see one of the first forays into hydroelectric power development at the Falls. 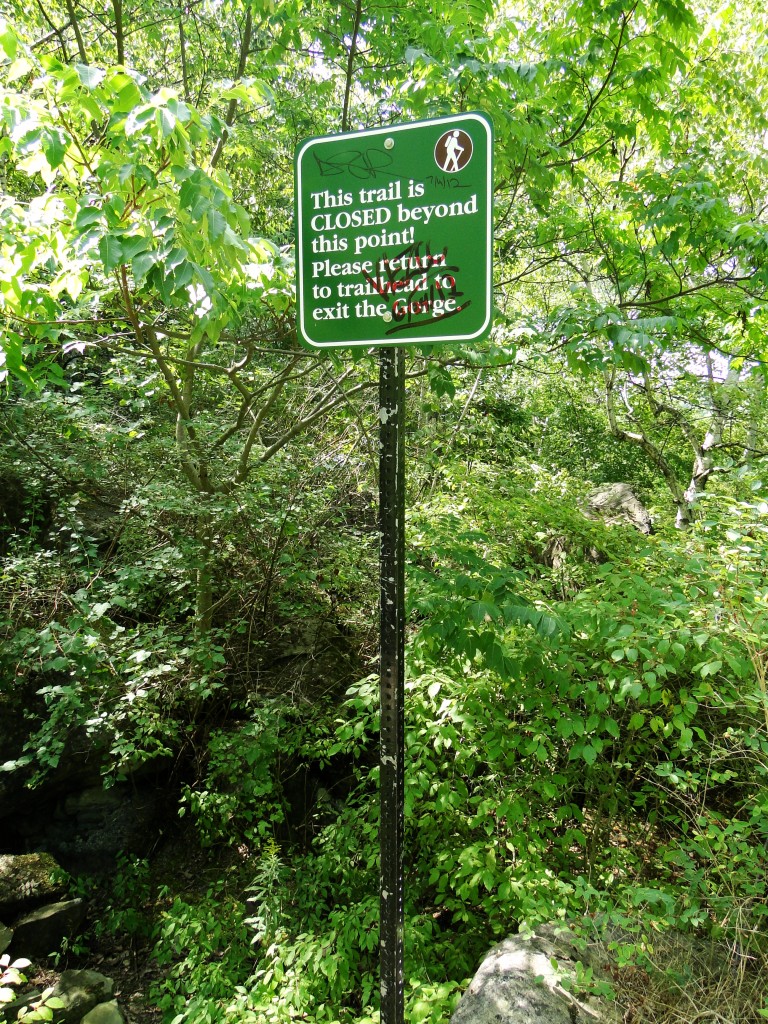