Two of the three William & Mary geobloggers have already posted their summaries of what went on in Williamsburg (and environs) at this weekend’s W&M Department of Geology 50th Anniversary Celebration, so it’s time for me to get cracking! (Take a look at Callan Bentley and Chuck Bailey’s posts when you get a chance, too.) The Geology Department at William & Mary was founded in 1961 by Dr. Ken Bick who was joined by three other venerable professors in the 1960s (Dr. Bruce Goodwin in 1963, Dr. Stephen Clement in 1964, and Dr. Gerald Johnson in 1965). The department has since expanded to seven faculty, and aside from a brief flirtation with the idea of offering a master’s degree, W&M Geology has been entirely devoted to undergraduate teaching and research – and boy, does it show! Students usually have at least an abstract or two (and sometimes first-authored papers) to their name by the time they graduate, and all participate in some kind of senior research project. The faculty are no less devoted; their enthusiasm for their research and teaching make W&M Geology a fantastic place to spend your undergraduate career. So I was naturally very excited to hear that the W&M Geology Department was hosting a celebration weekend for their 50th anniversary!

The weekend started off with a reception in the Geology Department, where we all got to admire the new classroom (where the geology library used to be) and part of the amazing rock and mineral collection that was recently donated to the department.  Unfortunately, I completely forgot to take photos of the new room, but it’s lovely that the geo majors finally have a dedicated space for upper-level courses. And a little extra walking to visit the books that were formerly in the geo library is good exercise! Spending time talking to my former classmates was great, and I got to meet a whole slew of other Geo alums as well.  (The slide shows running in the department on Friday – and at the banquet we had Saturday – were pretty hilarious, and proved that some of the faculty and alumni have been stockpiling incriminating photos for years.)

Saturday morning dawned clear and crisp, and by 9:30 (a pretty late start time by W&M standards!) more than 70 of us were on our way to Richmond to visit the Falls of the James River. This was actually the location of my very first field trip at W&M, and it’s neat to think of everything coming full circle for me.

The field trip group assembling in the fall zone.

Callan has done an excellent series of posts on the Falls of the James, so I’ll try not to repeat too much of what he discusses. Suffice it to say that there’s something for everyone here – structure, petrology, hydrology, you name it! This is where we see Virginia’s Fall Zone, which is the edge of the Piedmont Province, where you start getting off of Coastal Plain sediments and onto some real bedrock. It’s a spot where there’s a pretty dramatic increase in gradient in the James River – hence the falls – which we call a knickpoint. There are a number of reasons why these form (resistant rocks, changes in the base level of the stream or river), and knickpoints can either be stationary or migrate upstream over time. (Niagara Falls is an excellent example of a migrating knickpoint, by the way!)

Back in Virginia, we started off with a look at the bedrock in this part of the James River: the Petersburg Granite. It’s been dated a few times with U/Pb from zircons, and it seems to have formed somewhere between 315 and 330 million years ago. At that point, the Alleghanian Orogeny was going on in that part of the world, pushing up mountain ranges and creating magmatic reservoirs (which didn’t all erupt, and created the lovely pluton we spent our day on). The Petersburg Granite has a plethora of fascinating features on view at this location (near Belle Isle Park).

There are several prominent fracture sets in the granite, and one of our tasks was to figure out their orientations (and which set came first!) It runs out that the two dominant sets include steeply-dipping fractures striking ENE, and another set striking NW; there are also almost-horizontal fractures that are probably related to unloading and exfoliation of the granite over time. Some of the vertical fracture surfaces had lovely slickensides: 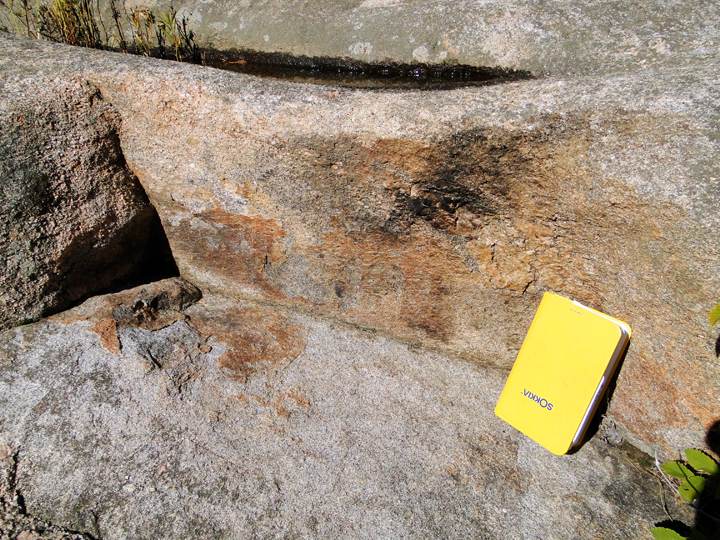 Might be a little hard to see - be sure to click the photo for a better view!

There were also some pretty impressive xenoliths; some of these may be bits of older magma, while others are probably chunks of country rock incorporated into the granitic pluton: There were even dikes being cut by fractures! (Structure meets volcanology; my favorite combination.) Right-lateral sense of displacement on this one

Being a bedrock river in this location, the James also has some excellent erosional features…by which I mean potholes big enough to have their own ecosystems. This bit of a trip was a good review of the main processes involved in bedrock river erosion (abrasion, plucking, and cavitation being the ones we discussed). Pothole formation was probably dominated by abrasion with sediment caught up in eddies (which seem to occur more often on joints, fractures and dikes, accounting for the alignment of many of the potholes). I always have a great time on field trips to the Falls of the James, and this was no exception. It also helped that the water was low, it was reasonably warm and we were not being precipitated on. All in all, it was a lovely day and everyone had a great time. On Saturday night, the Geology Department hosted a banquet at W&M’s swanky new business school. It felt a bit like having a meal in the British Museum, there was so much neo-classical architecture! We heard an abbreviated history of the department from my undergraduate advisor, Dr. Chuck Bailey, who’s currently the chair. And we also got to hear from a number of speakers – including Callan and myself – who talked about their experiences as W&M geologists, and told some pretty excellent stories. (There are good reasons why we try not to let the school lawyers hear any of these…) I was in great company with the rest of the speakers, which included some of the first W&M geology professors and a sampling of students from various decades. I was representing the “young guard”, and I found myself echoing the sentiments of my companions – that W&M left me with such a sense of family that visiting the department is like coming home again, and always will be.

Sunday morning was an opportunity to join a few remaining guests for brunch at the Williamsburg Hospitality House, and afterward I took advantage of the excellent weather to wander around “CW” for a bit – it was one of my favorite things to do in college, and it still is now. I’m glad I took the time and effort to travel back to Williamsburg for the weekend; we all had a wonderful time doing what geologists do best (field trips and parties), and I got to see what great company I’m part of as a William & Mary geologist. Too bad we’ll have to wait 25 more years for the next reunion!