I swore to myself I was going to get at least one more post up while I’m here in New Mexico, and I think this is a pretty good topic to write about. Last weekend I went on a rock-hunting trip with a group of engineers who live in my apartment complex, and on the advice of a local rafting guide (from another trip) we visited the Harding Pegmatite Mine near Dixon. The mine is no longer active (except for visits), and was donated to the University of New Mexico for educational and collecting use – and it’s pretty famous for the variety of minerals that can be found there.

The main attraction at the Harding mine is its pegmatite. Pegmatite forms from volatile-rich magma (usually granitic), which can travel large distances from its parent magma body. When temperatures and pressures allow for crystallization, the pegmatite magma cools inward from its edges; sequential crystallization (from the edges of the magma inward) forms distinct lithologic zones in which different mineral assemblages can be found. The Harding Pegmatites intruded as ‘lensate dikes’ into Precambrian metamorphic rock (quartz-muscovite schist and amphibolite). The most common minerals found in the mine include quartz, albite, microcline, muscovite, lepidolite (a lovely purple mica), and spodumene (lithium aluminum silicate); but you can also find beryl, garnet, and apatite in the pegmatite, as well as optical-grade calcite in the metamorphic rocks near the main mine works.

It was a hot, dry day, but perfect for exploring (especially since we were the only ones in the mine!) The caretaker, Gilbert Griegos, was especially nice and spent a lot of time showing us around and telling us the history of the mine. His family had been among the original miners, so he grew up with the mine and knows pretty much everything there is to know about it. (Which was a good thing, because I had never seen some of these minerals in the field, and it’s hard to simultaneously try and identify rough samples and try to teach non-geologists what to look for.)

Here are some photos from our morning explorations: Entrance to the mine (photo courtesy P. Shin)

The main mine works (excavations to the left, tailings to the right) - click to embiggen! Looking down into several mineshafts from the top of 'North Knob' A beautiful contact between the pegmatite and the metamorphic country rock (amphibolite). An outcrop with lepidolite (purple), beryl, and quartz (both white). The metal sign is about 30 cm wide. (Photo courtesy P. Shin) Two engineers, a geologist and some quartz... Lepidolite high on on the wall of one of the mineshafts (drill hole to the left is about 4 cm wide). The beryl adit, with a collapsed ceiling covering the lower shaft. The Harding mine was the country's leading beryl (beryllium cyclosilicate) producer from 1950-1951, and is still considered a strategic reserve. 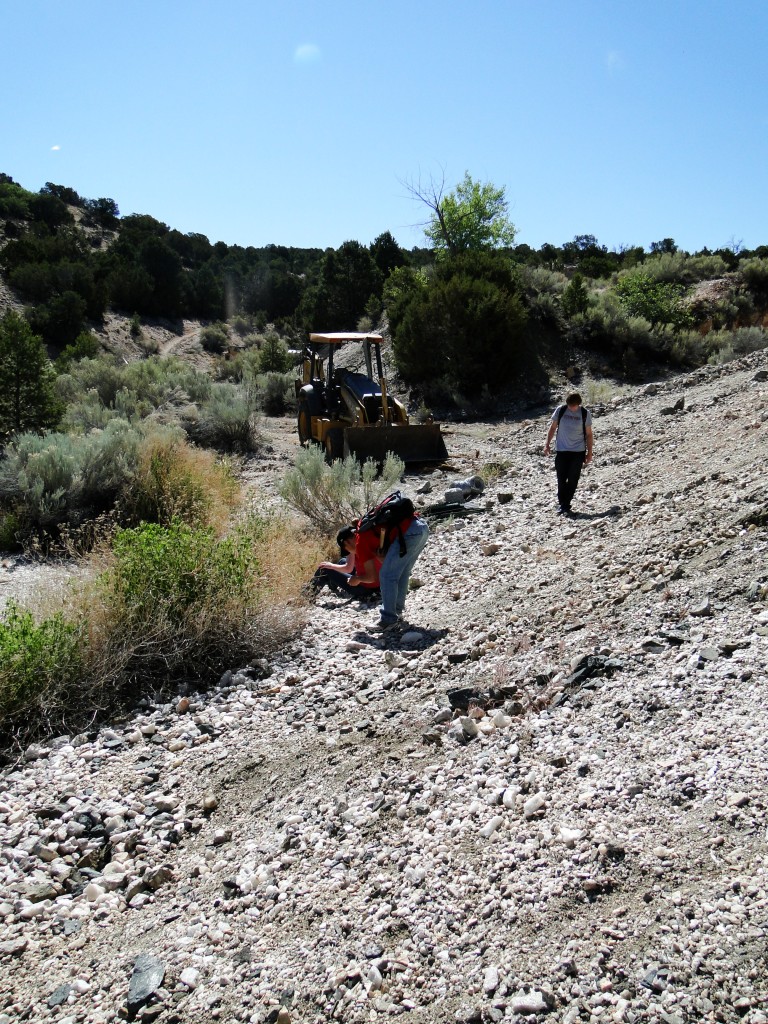 Exploring the tailings pile for minerals (the best place, because you don't have to use the hammers!)

Coming up next: Minerals from the Harding Mine (maybe even with a little geochemistry thrown in!)

PS – If you’re interested in collecting at the Harding Pegmatite Mine, contact info for the caretaker (as well as release forms) can be found here. We had no problem bringing a small group in on fairly short notice, but for larger groups you will want to make special arrangements.