As part of a quick trip to visit my Alma Mater earlier this week, I took an afternoon to go exploring on the shores of the York River. The river forms the northern border for the peninsula on which Williamsburg and its environs are located, and the York River (along with the James River to the south) is an excellent place to take a look at some Coastal Plain geology.

To do this, I visited two spots along the Colonial Parkway, which connects Williamsburg and Yorktown. In this area, the riverbanks expose the (surprise!) Yorktown Formation, a Pliocene unit of clays and sands with abundant fossils. Because the spots I went to were along the Parkway (which belongs to the Park Service), collecting isn’t allowed without a permit, but I took away some good photos instead.

First up is Indian Fields Creek, where I saw some excellent examples of oysters (both ancient and modern), whale bones, and pectens (scallops). These are photos of the beach where the creek enters the York River; most of the fossils here (and some modern shells) are fragmented, but you can occasionally find whole ones. The large scallop fragments are Chesapecten, either of the jeffersonius or madisonius species (it’s a bit hard to tell without counting the ribs, but I’d bet on jeffersonius). The chunk of black material on the upper left is a piece of whalebone, possibly a bit of a vertebra. There are also a few bits of oyster – modern and Ostrea compresirosta – and some barnacle fragments. 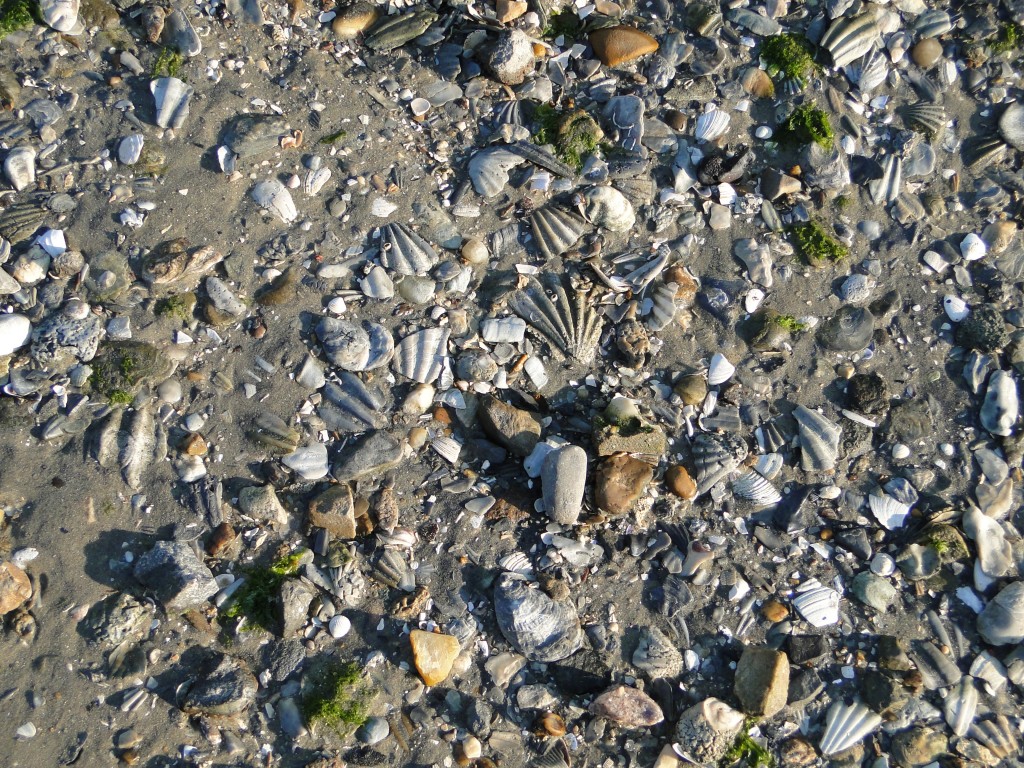 The quartz pebbles seem to have been eroding out from chunks of concrete on the nearby seawall, which also had some geologically interesting features (more on that later).

I didn’t find any really good fossil barnacles, but there were some lovely modern examples on a bit of driftwood. If you’re going fossiling on a tidal river, be sure to check and see when low tide is – unless you own a pair of good wading boots and don’t mind getting a little wet! Low tide is best for fossiling!

My next stop was at Felgates Creek, just a little way down the road. Same unit, but the fossil assemblage was a little different. I saw more oysters here, as well as some sadly fragile examples of Ecphora quadricostata, which are pretty spiraling snail shells. I couldn’t find any intact examples at Felgates, but I do have a few that I collected years ago on a different field trip: Ecphora, with and without barnacles

One interesting thing I noticed at Felgates was some very localized layering in the exposed fossil units. Here you can see the orange-to-yellow sediments of the Yorktown Formation, with clear fossil layers to the left, but the thing I hadn’t seen before was the layer of pebbles on top. 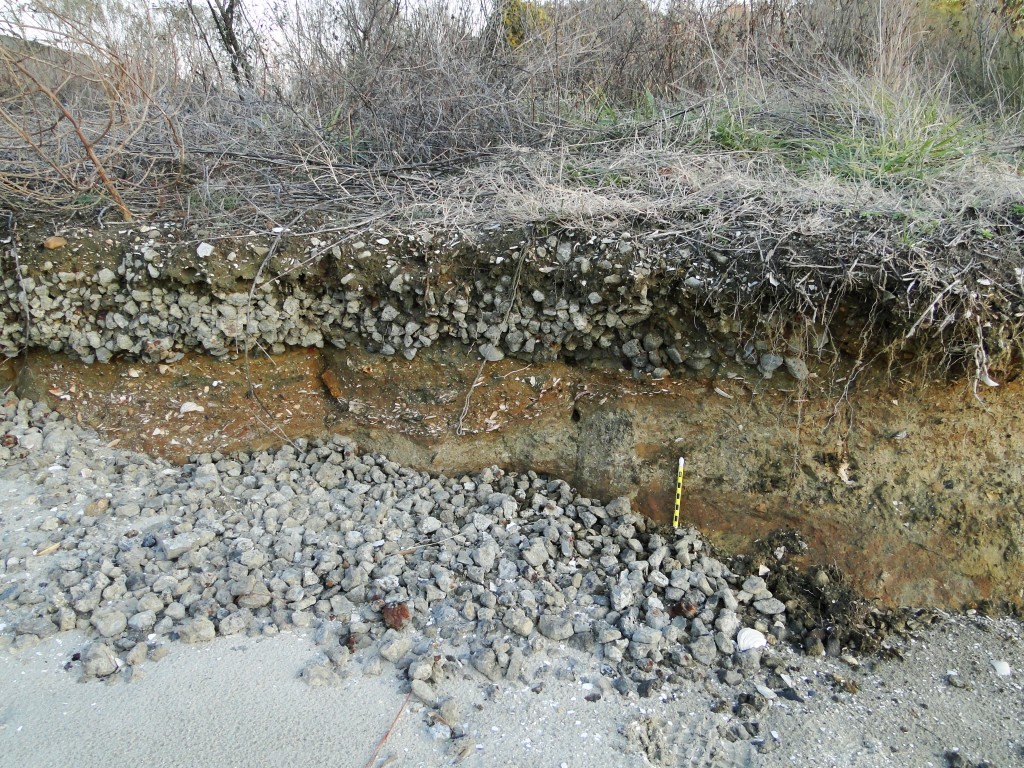 On closer inspection, they appear to be messy little iron concretions. I’ve seen these before in Coastal Plain units, but I don’t remember seeing so many in the Yorktown Formation, and definitely not in little (lenses? layers?) like this one. I didn’t explore this very long (it was getting cold), but it might be interesting to look into it later on. Lest you think that the Coastal Plain is all sand and clay and fossils, there are also some features (albeit not original) for the hard-rock geologist. I give you the rocks of the York River seawalls! Epidotization in a granitic gneiss Close up. (Thanks to Callan for the awesome scale pencil!) 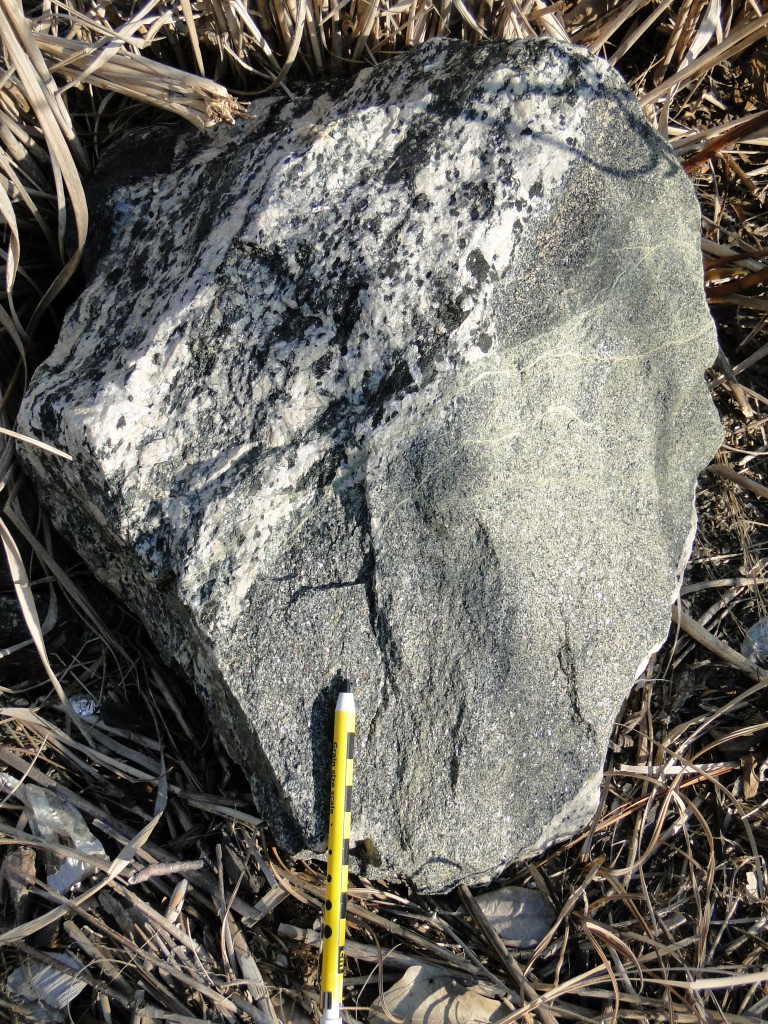 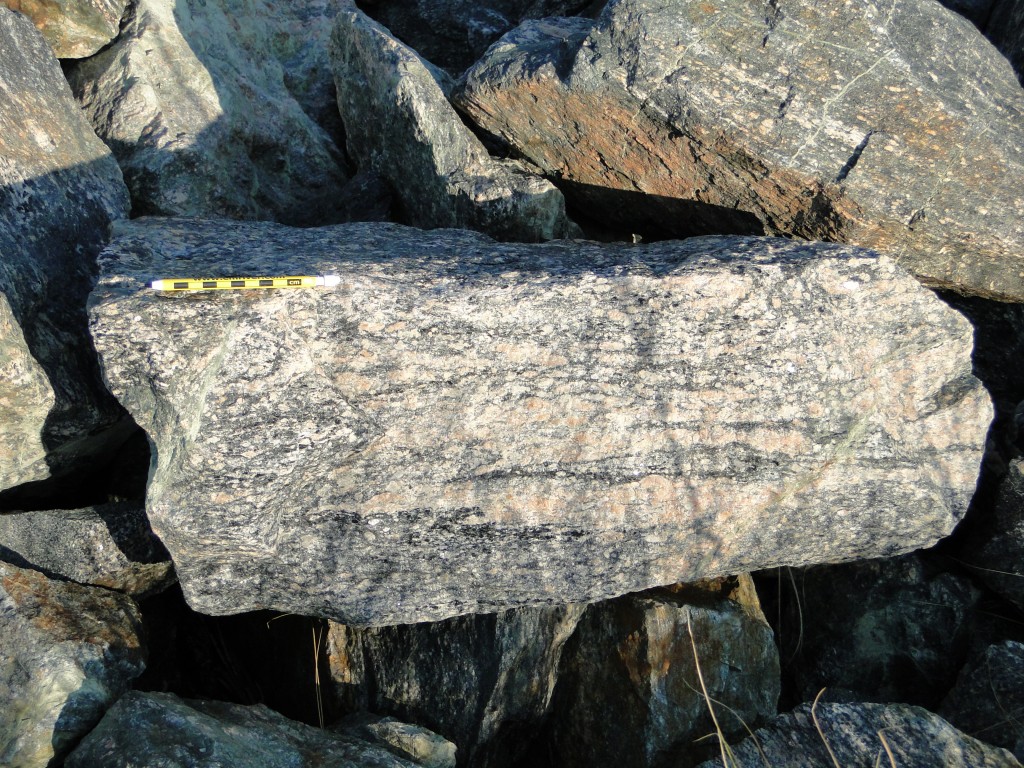 Maybe a little bit of folding going on? 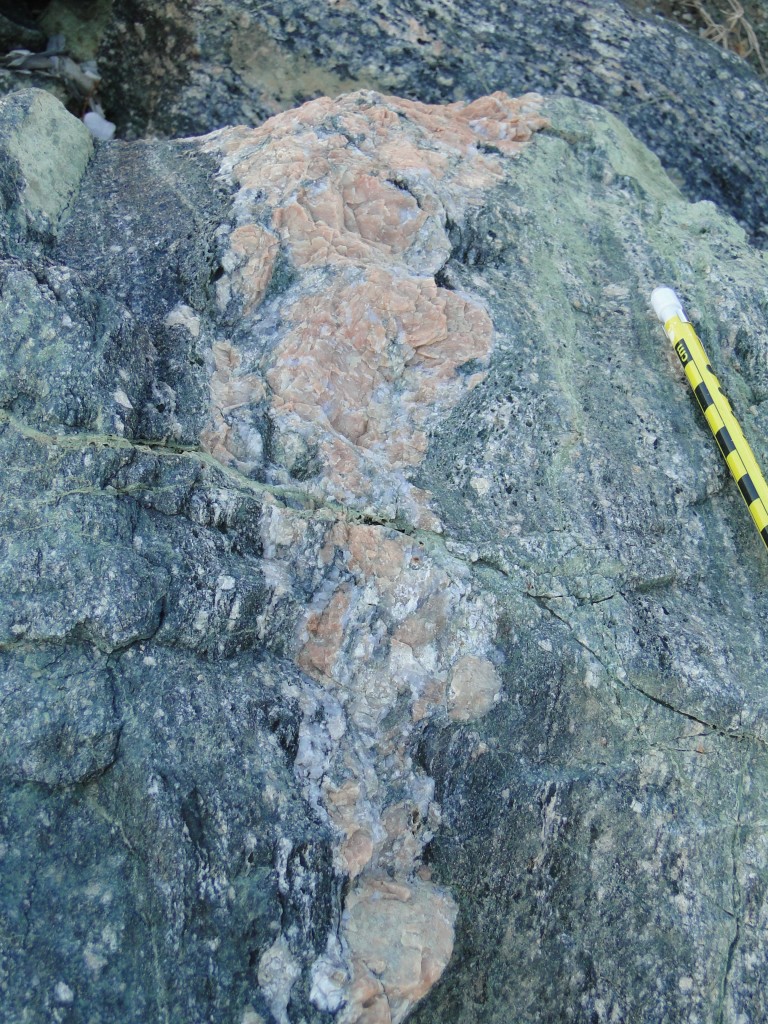 I’m not totally sure about the origin of these rocks, but if I had to hazard a guess (assuming they are from Virginia), I would go for Blue Ridge Mesoproterozoic units (like this layered gneiss). There are certainly no crystalline rocks closer than the Piedmont, and these are far too metamorphosed to be something like the Petersburg Granite.

So it turned out to be a chilly but rewarding day for a field trip, with features to interest both the hard and soft rock crowd. (I will admit that I had hoped to find a few shark teeth, but I’ve never done that in Virginia – it’s usually the newbies on the field trip who will come up those!)